He first discussed the results of the BladderPath trial, a randomized comparison of the time from initial diagnosis to “correct” treatment among patients with possible muscle invasive bladder cancer who receive staging with MRI, compared to TURBT. He emphasized that Dr. James concluded that imaging-based evaluation of these patients can accelerate the time to definitive treatment and potentially avoid TURBT, with associated delays and risks. He emphasized the “smart design” of the trial. However, he noted that initial triage was based on a Likert assessment at the time of cystoscopy. This is clearly imprecise and subjective. Thus, he suggested moving the use of MRI up earlier in the pathway. 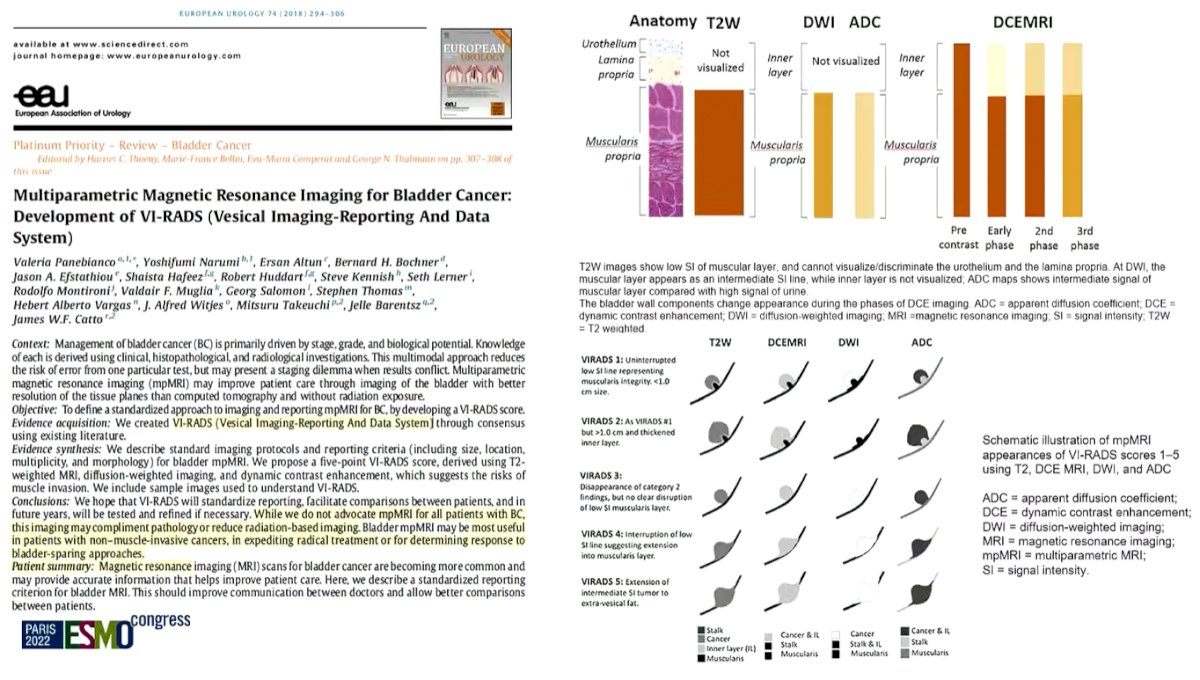 He highlighted that the VI-RADs scoring system has been evaluated in more than 20 studies to date with excellent worldwide diagnostic performance in terms of pre-TURBT staging. Further, the approach demonstrates reliability and reproducibility.

He noted that other authors have, as Dr. James did in this presentation, an imaging based approach to managing patients with bladder cancer. In these algorithms, patients with VI-RADS 4 or 5 lesions may potentially skip the diagnostic TURBT and proceed to neoadjuvant chemotherapy and radical cystectomy.

Translating this to clinical practice, he noted that today, we still rely on a histologic diagnosis. Thus, neoadjuvant chemotherapy on the basis of MRI diagnosis is unlikely sufficient. However, it may have nearly immediate clinical use in very frail patients in whom we may potentially skip TURBT.

He moved then to discuss the results of the RACE IT trial as presented by Dr. Schmid. This study demonstrated the safety and efficacy of neoadjuvant radiotherapy and immunotherapy prior to radical cystectomy for locally advanced muscle invasive bladder cancer.

He noted that, while this trial was restricted to those ineligible or unwilling to receive neoadjuvant chemotherapy, only 10 of the 33 patients were actually cisplatin ineligible. While the study is reported as positive, Dr. Bellmunt emphasized key efficacy outcomes among the secondary endpoints. He noted that 38.7% of patients had a complete response and 58.1% were downstaged to non-invasive disease. When compared to other trials, he noted that these results are relatively comparable. 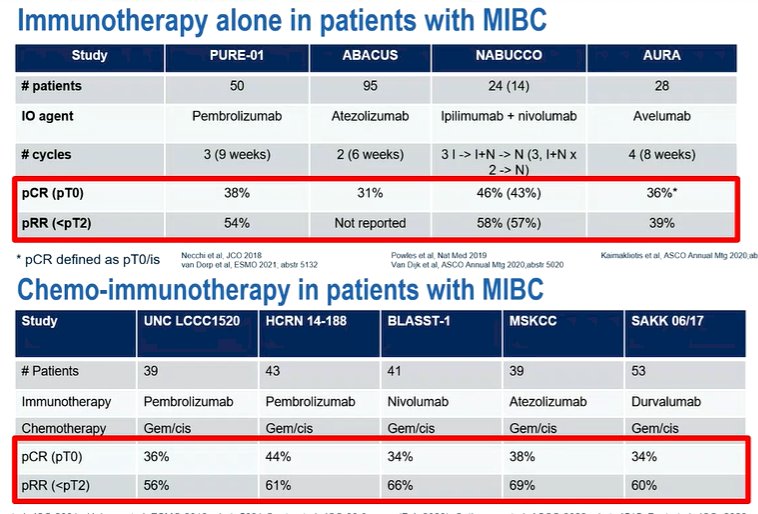 He further discussed the potential for bladder sparing using radiotherapy with (chemo-) immunotherapy. These trials clearly lack pathological results given that bladder sparing is the treatment intent. However, response rates are favourable.

In terms of design, he emphasized the question of how liberal we may be in terms of inclusion of patients who are chemotherapy ineligible or unwilling. Further, he considered the need for surgical intervention in these patients who have already received immunotherapy and radiotherapy. However, the use of surgical extirpation with pathologic endpoints offers the potential for correlative studies to provide mechanistic insights into the determinants of IO-RT response.

He emphasized that neoadjuvant radiotherapy has been assessed in muscle invasive bladder cancer therapy with a suggestion of benefit. Further, the neoadjuvant immunotherapy and radiotherapy paradigm is also being assessed in the RAD VACC MIBC trial at Houston Methodist Hospital. While this paradigm, “has a lot of sense” according to Dr. Bellmunt, he voiced concerns regarding potential long-term synergistic toxicity between surgery and radiotherapy. As the “flip side” to this coin, he noted that there are ongoing trials looking at bladder preservation without surgery and without radiation therapy.

Finally, he moved to discuss the presentation from Dr. Smith regarding the association between hypoxic tumors and response to hypofractionated radiotherapy. He noted this was a “tricky” presentation to discuss given the nuances of combinations of these trials. In BCON, the authors examined the role of adding carbogen and nicotinamide to radiotherapy for bladder cancer while BC2001 performed two comparisons looking at the role of adding 5-FU and mitomycin C and looking at radiotherapy delivery changes. In both trials, there was a relatively even balance of conventional and moderate hypofractionated radiotherapy delivery. In the BCON trial, the use of a combined approach demonstrated a survival benefit. However, it has not been commonly adopted in the US and RT alone is not a standard of care. Data from this trial demonstrated a differential effect with a greater benefit in those with high-hypoxia. However, in the BC2001 trial, the authors found that hypoxia was prognostic but didn’t predict benefit to 5FU and mitocycin-C, on the basis of a lack of interaction.

Dr. Bellmunt noted that these two trials have been previously meta-analysed demonstrating that moderate hypofractionation is non-inferior in terms of locoregional control and late toxicity. Thus, the authors proposed that this approach should be a new standard of care in patients with MIBC. In the data presented by Dr. Smith today, we can see that the hypoxia gene signature informs regarding a response to hypofractionation: those with non-hypoxic tumors benefit from hypofractionation while in those with hypoxic tumors, there is no such benefit. 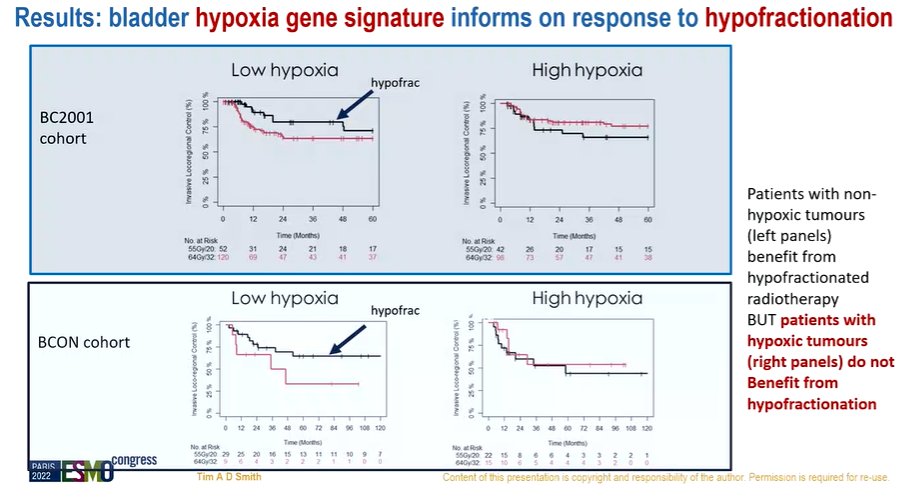 He considered then a number of suggestions as to why hypofractionation may have failed:

-hypoxic cells are radioresistant, requiring a higher photon dose before cell death. While 2-3x higher dose is needed, moderate hypofractionation only provides 1.3-1.5x higher dose. These effects may be able to be overcome with even higher doses such as those administered in stereotactic body radiotherapy.
-fractionation should reduce the effect of hypoxia by allowing these to become re-oxygenated and thus more radiosensitive between fractions
-to overcome radioresistance in hypoxic cells, we can use higher doses per fraction or carbon or neutron radiation

Moving forward to the clinic, he noted that these data are important in personalizing radiation therapy for bladder cancer.