The first study, presented, by Dr. Gerhardt Attard addressed the need to improve outcomes in men with high-risk non-metastatic (M0) disease. This analysis of STAMPE data evaluated men with localized high-risk or node-positive M0 prostate cancer randomized to standard-of-care (SOC), which included three years of ADT plus RT versus SOC plus AAP with or without ENZ. Dr. Efstathiou began by reviewing results of the co-primary endpoints, which showed a clinically significant and highly statistically significant 47% reduction in metastasis-free survival (MFS) and 40% reduction in overall survival (OS) with the addition of AAP with or without ENZ to SOC. 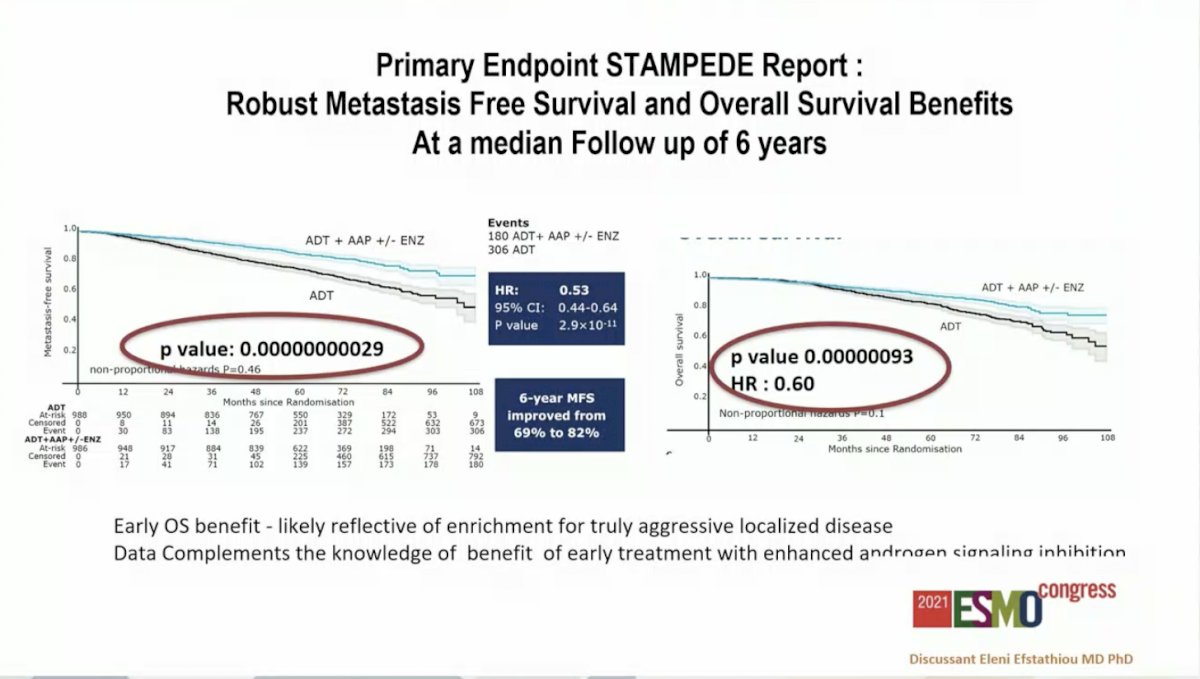 Dr. Efstathiou went on to discuss safety findings of interest and caveats for this study. Notably, there appeared to be an unnecessary safety compromise with the addition of ENZ to AAP. Further, detailed long-term monitoring remains paramount. Although there was no signal of excessive loss of life with the addition of AAP (with or without ENZ), long-term follow-up for excess morbidity and mortality is needed. Additional caveats at this time include that this is the first report of enhanced androgen receptor signaling inhibition and establishing the efficacy of this approach will benefit from confirmatory trials. Also, to date, we have no knowledge regarding the efficacy of next-generation androgen receptor inhibitors (enzalutamide, apalutamide, darolutamide) alone in this space. Finally, this approach employed RT as local therapy, and data on radical prostatectomy is not yet available. However, she concluded by emphasizing the strength of this study, which addressed a real-time unmet need, had a SOC comparator arm, and achieved clinically meaningful results.

Next, Dr. Efstathiou discussed the PEACE-1 trial. PEACE-1 employed a 2x2 design to assess (separately and combined) the impact of the addition of AAP and radiation (RT) to SOC therapy in men with metastatic hormone-sensitive prostate cancer (mHSPC). This update focused on OS for men treated with or without AAP. She began by highlighting the compendia of positive Phase 3 trials (LATITUDE, STAMPEDE, ARCHES, ENZAMET, TITAN), which showed that earlier treatment with novel androgen signaling inhibitors improved OS, generally independent of high versus low volume status. ARCHES, ENZAMET, and TITAN all comprised patients treated with ADT plus Docetaxel plus an androgen receptor signaling inhibitor, but none were powered to assess whether triplet therapy improves upon doublet therapy.

PEACE-1 demonstrated a significant improvement in OS with the addition of AAP for patients in the overall cohort regardless of SOC treatment (ADT with or without Docetaxel) as well as the subset who received ADT plus Docetaxel as SOC. The fact that 81% of patients on the SOC arm subsequently received an androgen receptor signaling inhibitor suggests that timing of AAP –given in combination with ADT plus Docetaxel – is essential. Lastly, Dr. Efstathiou commented on a notable difference in benefit by disease volume. Patients with high volume mHSPC derived a significant OS benefit from the addition of AAP to ADT plus Docetaxel whereas those with low volume did not. However, she noted that, as expected, far fewer events had occurred in patients with low volume and as such this OS data is immature and will need to be re-assessed at future timepoints. 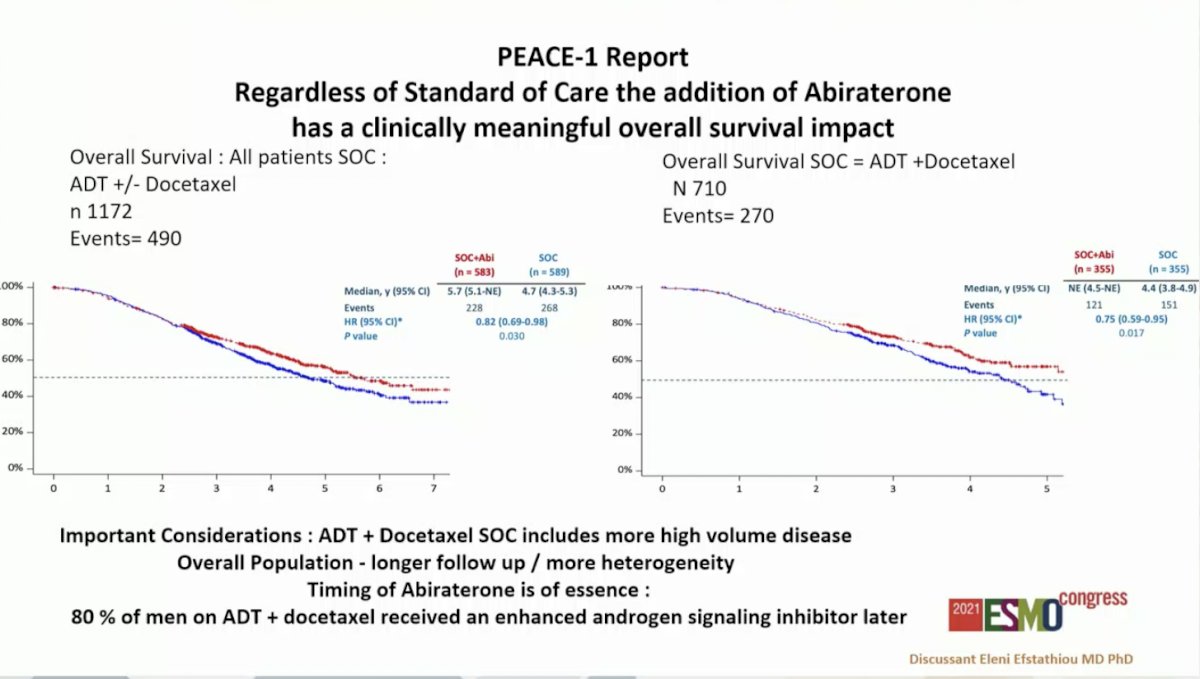 Dr. Efstathiou concluded by examining whether the PEACE-1 results presented at ESMO 2021 are practice-changing. While the data compellingly demonstrates that triplet therapy improves rPFS and OS for men with high volume mHSPC compared to ADT plus Docetaxel alone, this control arm is only one SOC treatment. As such, an unanswered question remains how the triplet compares to ADT plus AAP. However, her take-home message was that earlier combinatorial treatment with “enhanced” androgen signaling inhibition is a requirement for men with mHSPC.