(UroToday.com) In this presentation, Dr. Gerhardt Attard discussed results of abiraterone acetate plus prednisolone (AAP) with or without enzalutamide (ENZ) added to androgen deprivation therapy (ADT) compared to ADT alone for men with high-risk non-metastatic (M0) prostate cancer. This study comprised a combined analysis from two comparisons in the STAMPEDE platform.

The majority of men who die of prostate cancer are initially diagnosed with M0 disease with high-risk patients most likely to subsequently recur and die of their disease. Radiation (RT) plus three years of ADT is a standard-of-care (SOC) therapy for men with high-risk localized prostate cancer, however, a large proportion of these men will recur. Improving long-term outcomes for these men remains an unmet need. Despite a known overall survival (OS) benefit in the metastatic (M1) setting, two studies (STAMPEDE and GETUG-12) failed to demonstrate an improvement in metastasis-free survival (MS) for the addition of docetaxel to ADT for men with M0 prostate cancer. The benefit of androgen receptor signaling inhibitors (e.g. AAP or ENZ) in men with M0 prostate cancer is uncertain.

The study discussed in this presentation valuated SOC (RT plus 3 years of ADT) to SOC plus AAP with or without ENZ for two years. Several amendments were made in 2019 to allow for the current analysis: 1) updated the reporting plan to split the M1 and M0 analysis, 2) changed the power of the study for a primary endpoint of MFS, and 3) specified a meta-analysis with the new data from the SOC plus AAP plus ENZ arm, which enrolled from 2014 to 2016, following the SOC plus AAP arm, which enrolled rom 2011 to 2013. The study included M0 patients based on conventional CT and bone scan. Newly-diagnosed and relapsed patients were included based on the criteria outlined in the slide below. 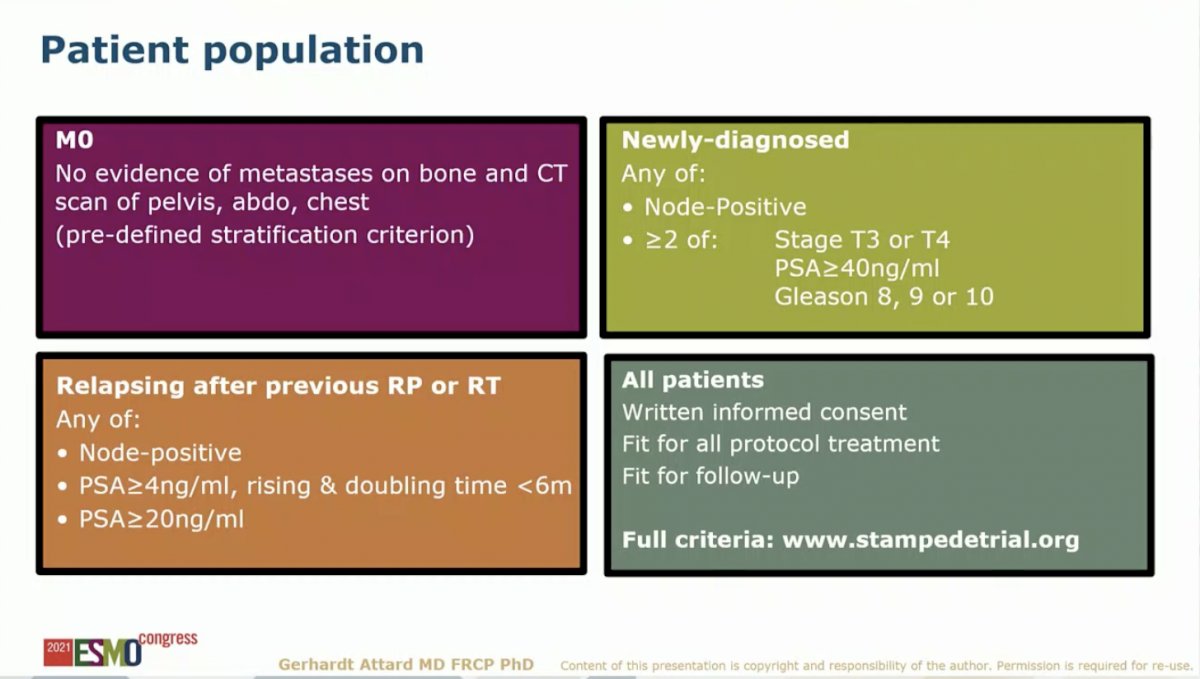 This study randomized 1,974 to receive SOC or SOC plus AAP with or without ENZ. The median age was 68, median PSA was 34 ng/ml. Only 3% of patients had relapsed after prior treatment. 39% were node-positive (N1). Radiation was mandated for patients with node-negative (N0) disease and recommended for patients with N1 disease. Accordingly, 99% and 71% of newly-diagnosed N0 and N1 patients received local RT, respectively. Median follow-up for the study population is 72 months. Given the consecutive timing of the two experimental arms, follow-up is longer for the AAP arm (85 months) than the AAP + ENZ arm (60 months). 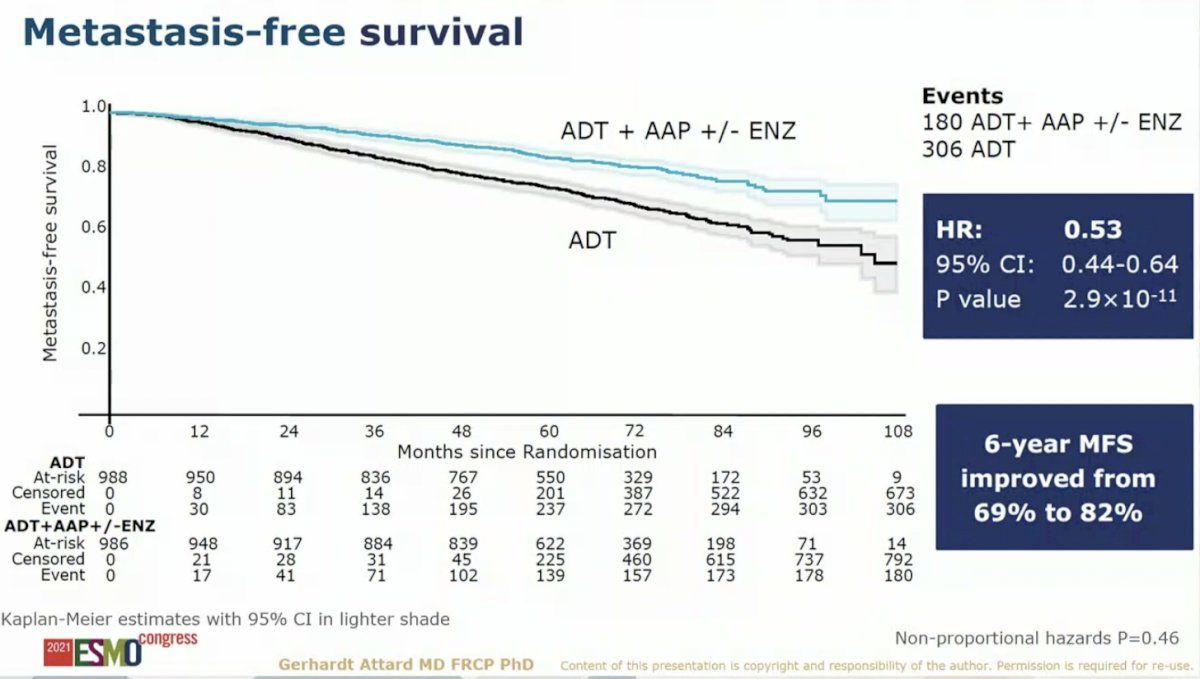 Analysis of MFS by randomization period – the AAP group versus the AAP with ENZ group – showed no difference in MFS. This suggests that the addition of ENZ to AAP does not improve long-term outcomes for men with M0 prostate cancer. These data are consistent with the results of the ACIS study, which similarly failed to demonstrate a benefit in OS with the addition of apalutamide to AAP in men with M1 castration-resistant prostate cancer.1

Subgroup analysis of the primary MFS endpoint demonstrated benefit of the addition of AAP with or without ENZ to SOC across all subgroups. 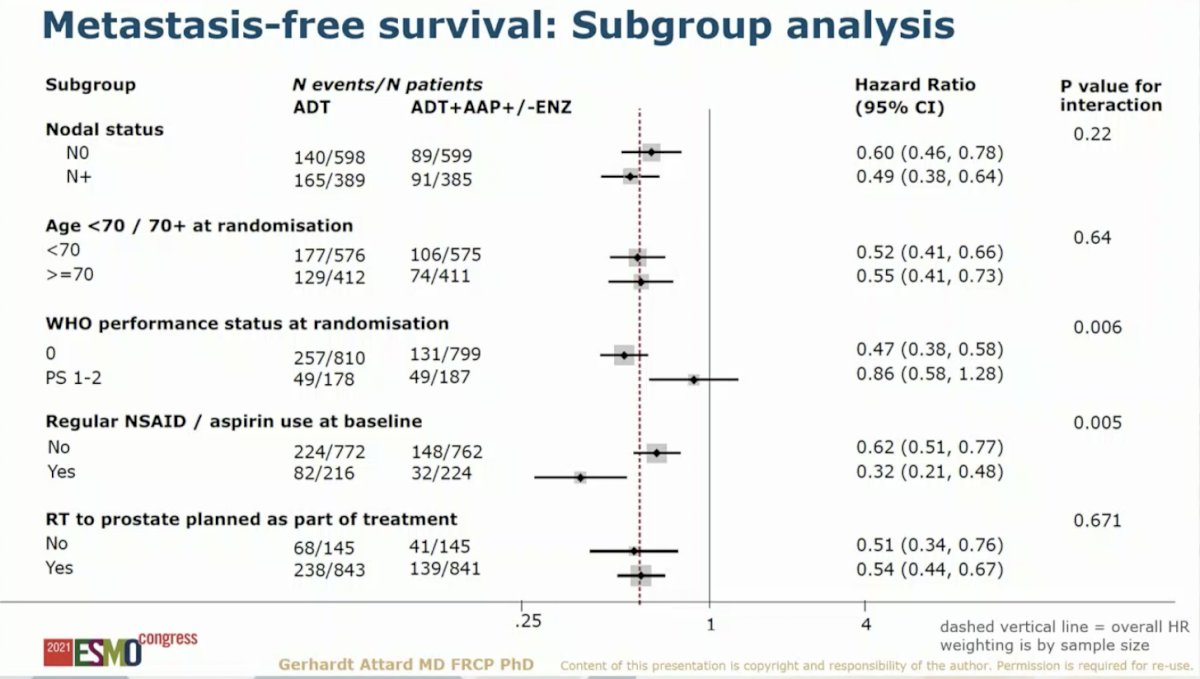 Dr. Attard moved on to discuss secondary endpoints, starting with OS. With six years of median follow-up, there was a 40% reduction in OS for the addition of AAP with or without ENZ to SOC (P = 9.3 x10^-7). This translated to six-year OS of 86% on the SOC plus AAP with or without ENZ compared to 77% on the SOC arm. As seen with MFS, there was no significant difference in OS across randomization periods, further supporting no additional improvement in with the addition of ENZ to AAP. 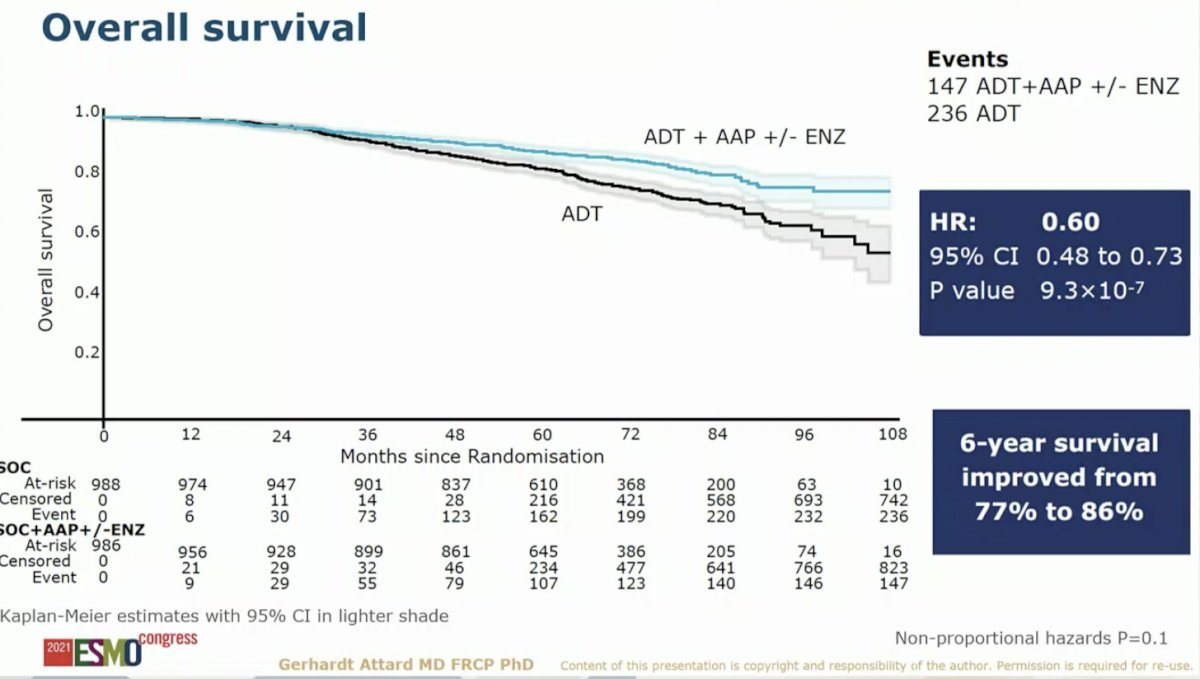 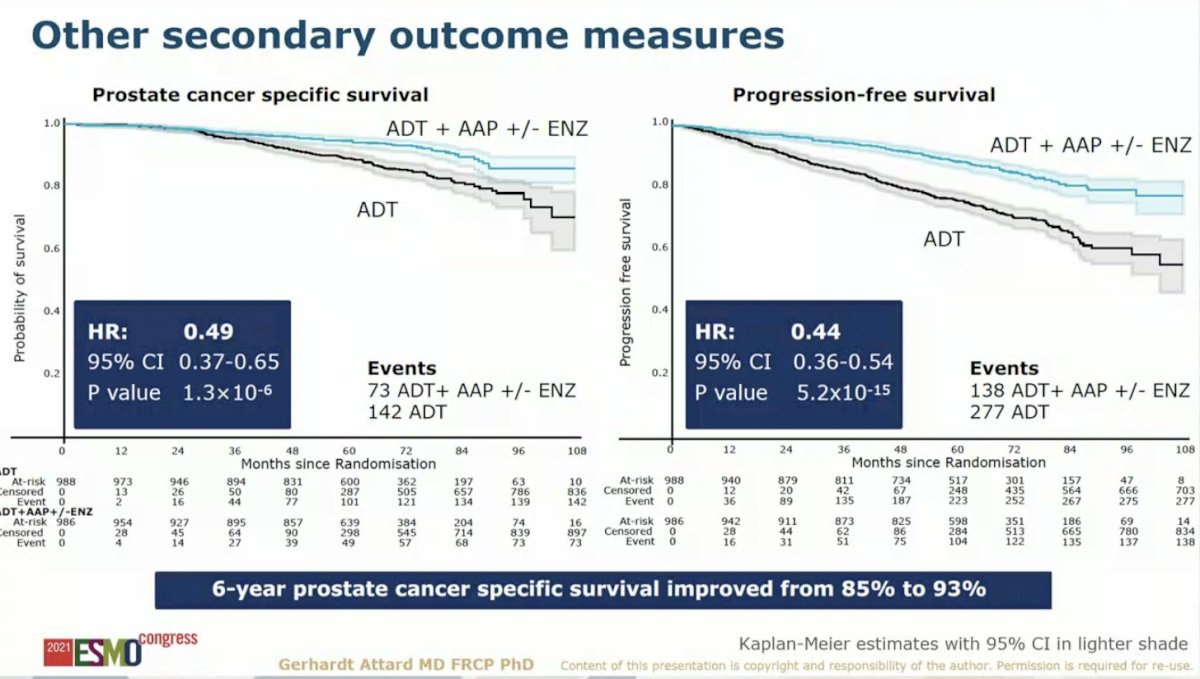 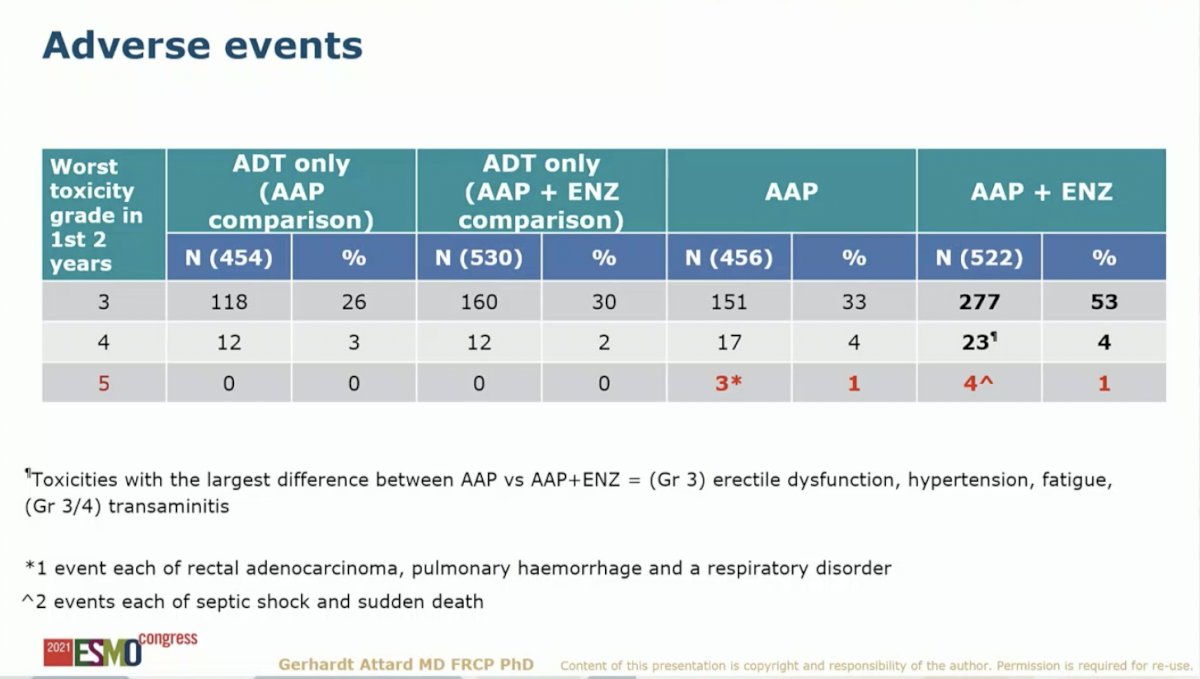 Dr. Attard ended by summarizing that two years of AAP-based therapy significantly improved MFS and OS in men with high-risk M0 prostate cancer starting ADT. Adding ENZ to AAP increased toxicity with no discernible impact on efficacy. Limitations of this study include the lack of data on long-term complications beyond two years and under-representation of relapsed patients. Nevertheless, he concluded that the addition of two years of AAP to RT plus three years of ADT should be a new standard of care for men with high-risk M0 prostate cancer.