Dr. Oudard began by highlighting the rapidly evolving disease space in mCSPC. While ADT was described for this indication in 1941, no further therapies demonstrated benefit until 2014 when the CHAARTED trial demonstrated a survival benefit for the use of docetaxel. Since that time, seven further trials have reported positive results and supported the role of abiraterone, enzalutamide, apalutamide, and combinatorial approaches in this disease space. 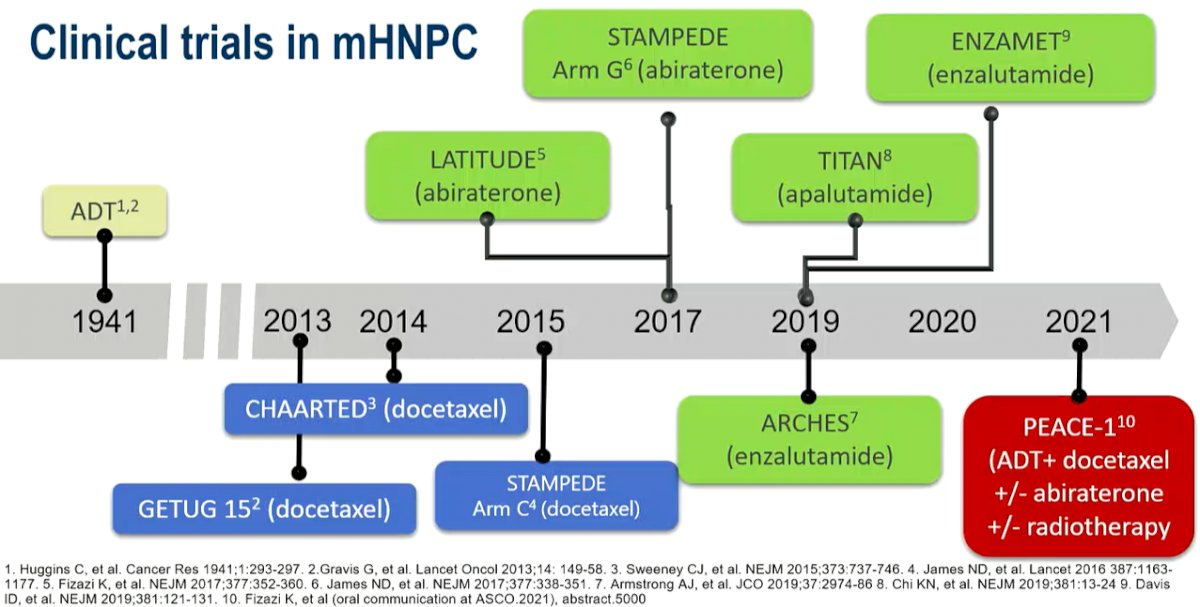 In terms of comparative data, only an indirect comparison of these treatments is available, suggesting that, in terms of overall survival, abiraterone and docetaxel are similarly efficacious when added to ADT, though with different toxicity profiles. Thus, according to 2020 ESMO guidelines, each of these systemic agents is recommended (strength I, A). Further, among those with low-volume disease, radiotherapy to the primary tumor is also recommended on the basis of subgroup analyses from STAMPEDE.

Based on the final analysis of the ARCHES trial, Dr. Oudard asked “what’s new?” This report provides more mature data from this cohort, with demonstrated improved overall survival by an absolute difference of 4% at 2 years, 9% at 3 years, and 14% at 4 years. He emphasized that overall survival benefits increased with ongoing follow-up.

In subgroup analyses, he emphasized that the magnitude of effect was larger among those with high-volume disease. Additionally, among those who received prior docetaxel before randomization, the benefit of enzalutamide is no longer significant, though power in this group is limited due to small sample size. Finally, among the 11% of patients with visceral metastasis, Dr. Oudard emphasized that the benefit of enzalutamide was again not statistically significant.

Moving to adverse events, he highlighted that enzalutamide toxicity was similar to the pattern we are used to seeing based on its indication in mCRPC.

Dr. Oudard then compared this report of the ARCHES trial to previous publications examining all treatment options in this disease space. In general, across all the studies, the evidence of overall survival benefit depends on the duration of follow-up.

In terms of the importance of disease volume, Dr. Oudard emphasized that this is not entirely clear in mCSPC. While CHAARTED demonstrated that the benefit of docetaxel was among those with high-volume disease, the analysis from STAMPEDE showed a benefit to docetaxel regardless of disease. Similarly, the STAMPEDE analysis examining abiraterone showed a benefit independent of volume while LATITUDE included only high-risk patients and cannot provide these subset data. In TITAN, analyses favoured a benefit of apalutamide in the high-volume group though was not powered to assess this. The data are even muddier for enzalutamide as the ENZAMET analysis favoured its use in low-volume disease and the ARCHES analysis favour high-volume. However, it is clear that disease volume is important when considering the role of local prostate radiotherapy in patients with metastatic disease with the benefit of this approach restricted to patients with low-volume disease.

Considering the type of metastasis, Dr. Oudard demonstrated that all of these trials using novel hormonal approaches have demonstrated an attenuated (and non-significant) effect of treatment in patients with visceral disease.

Dr. Oudard then moved to the question of whether we should combine agents with proven benefit, namely docetaxel and enzalutamide. On the basis of data from ENZAMET (which notably were not directly randomized), failed to demonstrate a survival benefit to the addition of enzalutamide for patients who also received docetaxel. Similarly, in the subgroup of patients in ARCHES who had previously received docetaxel, no significant benefit to the use of enzalutamide was demonstrated.

Dr. Oudard then considered the question of how to chose between ADT + docetaxel or ADT + a novel hormonal therapy. This remains a debated topic without strong evidence to guide decision making. However, he highlighted the importance of considering disease-related pain, pre-existing comorbidity, the risks of polypharmacy and drug-drug interactions, and particularly patient preference in well-informed patients. He further highlighted the eagerly awaited PEACE-1 data which will be presented September 19th at the ESMO meeting and should inform the role of combinations of docetaxel and abiraterone and local radiotherapy and the ARASENS trial which will examine the role of the combination of docetaxel and darolutamide.


Presented by: Stéphane Oudard, MD, PhD, is Professor of Oncology and Chief of the Oncology Clinical Research Unit at the Georges Pompidou Hospital in Paris, France.