In previously reported findings from the primary analysis of this study, ARCHES (NCT02677896) demonstrated that the addition of enzalutamide to androgen deprivation therapy (ADT) reduced the risk of radiographic progression and improved secondary outcomes in men with mHSPC. This approach, along with the use of abiraterone, apalutamide, or docetaxel, has now become a standard of care in this disease space.

Overall survival (OS) represents a key secondary endpoint of the ARCHES trial which was immature at the time of primary analysis and reporting. At this point, there have not been 356 OS events, allowing for final analysis.

To briefly summarize, ARCHES enrolled men with de novo or relapsed mHSPC (n=1150) and then randomized these men in a 1:1 fashion to receive enzalutamide (160 mg/day) + ADT or placebo + ADT, stratified by disease volume and prior docetaxel use.

Based on the evident benefits of adding enzalutamide at the time of data cut-off and unblinding for the primary outcome analysis, 180 (31.3%) patients treated with placebo + ADT crossed over to open-label enzalutamide + ADT among 184 patients who did not have progression while on placebo. A stratified log-rank test was performed at a two-sided significance level of 0.04 for OS based on an O’Brien-Fleming boundary and a planned 342 events. Kaplan-Meier estimates of OS and time to subsequent antineoplastic therapy (TTNAnti) were reported and hazard ratios (HRs) were estimated from a stratified Cox proportional hazards model. Safety was assessed via treatment-emergent adverse events.

As previously reported, the baseline characteristics were similar between treatment arms. However, those who did not progress on placebo at the time of primary data analysis and subsequently crossed over had somewhat more favorable disease characteristics.

These findings were relatively consistent in most prespecified subgroups. 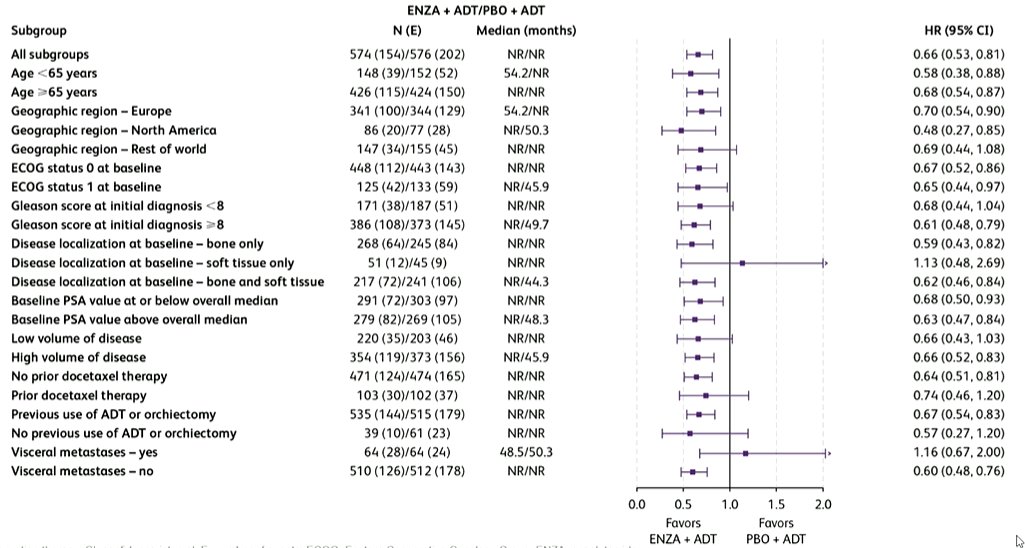 Dr. Armstrong noted that the point estimate of effect did not appear to differ meaningfully between those who had or had not previously received docetaxel.

Further, enzalutamide + ADT continued to prolong TTNAnti vs placebo + ADT. Including those who crossed over, 42% of patients in the placebo arm received enzalutamide and 70% received any proven life-prolonging therapy. 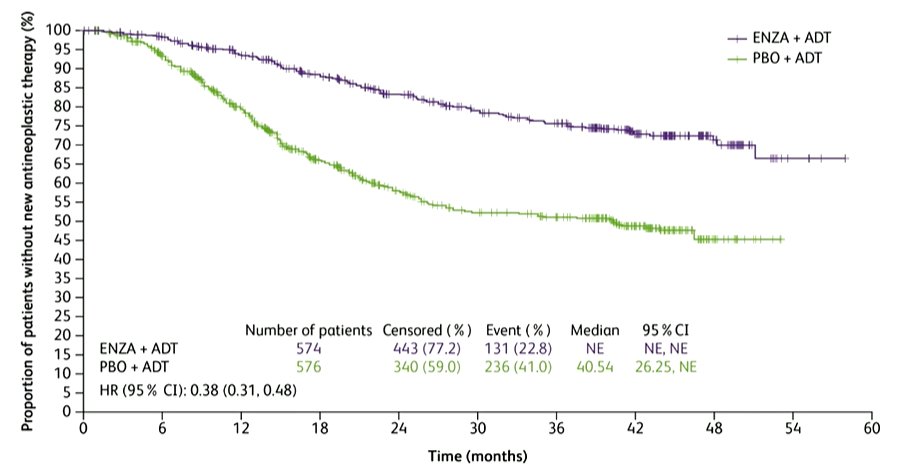 The safety profile of enzalutamide + ADT vs placebo + ADT was consistent with findings from the primary analysis. Notably, interpreting these results depends on understanding that the duration of time of treatment is substantially longer for those on the active agents.

Presented by: Andrew J. Armstrong, MD, Professor of Medicine, Associate Professor in Pharmacology and Cancer Biology, and Professor in Surgery at Duke University School of Medicine and a member of the Duke Cancer Institute, Durham, NC, United States of America

Related Content: ESMO 2021: Discussion on the Final Overall Survival Analysis From the ARCHES Study: Enzalutamide + ADT in Men With mHSPC