(UroToday.com) As a portion of the European Society for Medical Oncology (ESMO) Annual Congress, an Educational Session focused on improving outcomes in bladder cancer was held. In this context, Dr. de Wit discussed new developments in muscle-invasive disease.

Dr. de Wit began by highlighting the role of chemotherapy as it evolved through the 1980s and 1990s, utilizing a cisplatin backbone in various combinations. MVAC was the first regime to demonstrate a median overall survival exceeding one year in metastatic disease. Subsequently, in 2000, a randomized comparison of gemcitabine and cisplatin versus MVAC was published showing comparable results with median overall survival of 13.8 and 14.8 months, respectively. However, gemcitabine cisplatin was found to be significantly less toxic and became the standard of care for elderly “fit” patients, including those without renal dysfunction, with performance status 0-1, and without significant comorbidity to preclude treatment. Further, it also became a frequently used approach in the neoadjuvant setting. For patients with renal dysfunction, cisplatin may be substituted for carboplatin but is less efficacious.

In the neoadjuvant setting, the EORTC/MRC trial demonstrated a benefit to the use of three cycles of neoadjuvant CMV compared to no neoadjuvant therapy. However, he emphasized that this is not the most effective chemotherapy regime available and nearly 1 in 7 patients did not receive planned cystectomy. Thus, these results may not provide the most relevant data. Additionally, Dr. de Wit emphasized that the extent of pelvic lymphadenectomy (quantified with a nodal yield) is associated with disease free survival. Thus, he concluded that, using modern neoadjuvant approaches, a benefit greater than 6% observed in the EORTC/MRC trial would be expected.

While gemcitabine-cisplatin has become a standard neoadjuvant approach, he suggested that dose dense MVAC may be superior. Based on data presented at ASCO GU 2020, the pathological complete response rate was higher for patients receiving ddMVAC and, in data being presented at ESMO 2021, 3-year progression free survival was higher as well (66% vs 56%, HR 0.70, 95% CI 0.51-0.96).

Dr. de Wit then discussed the use of adjuvant chemotherapy. While he suggested that it is likely to provide a similar benefit, logistically provisioning chemotherapy after surgery is more complicated and the studies supporting its use are less methodologically robust, precluding conclusive answers. The EORTC 30994 trial was seeking to assess the role of immediate chemotherapy versus at the time of relapse in high-risk patients following cystectomy. However, it closed due to slow accrual. Among those accrued, the data suggest a potential benefit in patients with node negative disease.

However, considering upper tract urothelial disease, the POUT trial has demonstrated a disease-free survival benefit to the use of adjuvant chemotherapy following nephroureterectomy in UTUC.

However, to date, there is no significant difference in overall survival, though the trial was not powered to assess this outcome.

Dr. de Wit then moved to discuss the role of immunotherapy in metastatic urothelial carcinoma, highlighting the role of both pembrolizumab in the second-line setting and avelumab maintenance following induction chemotherapy.

Additionally, one-year of adjuvant nivolumab has demonstrated a benefit in disease-free survival based on presented data from the CheckMate274 trial. This result was found in the ITT cohort as well as the PD-L1 positive population. In subgroup analyses, Dr. de Wit emphasized results based on initial tumor local (with a bigger benefit among those with primary bladder tumors) and among those who received neoadjuvant cisplatin-based chemotherapy. Ongoing follow-up will be coming and an OS benefit is likely necessary to drive approval. Further, this ongoing data will assist with understanding efficacy in subgroups.

However, in the same setting, IMVigor010 failed to show a benefit for the use of atezolizumab. The ongoing Ambassador trial will report on the role of pembrolizumab in this disease space. 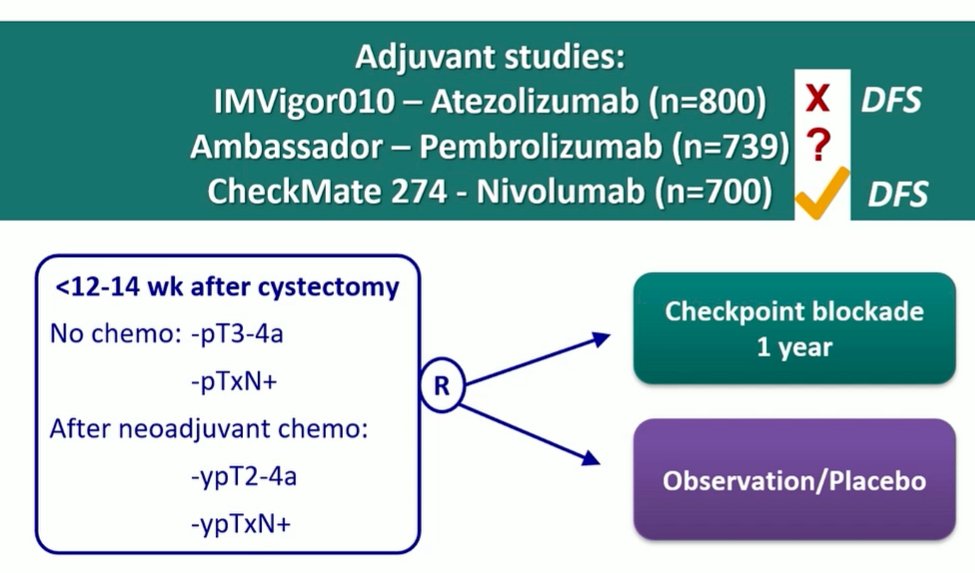 Dr. de Wit then discussed emerging phase II data concerning the use of checkpoint inhibition in the peri-operative setting for patients with MIBC. As highlighted in the table below, there are four trials including two with monotherapy and two with combination therapy. 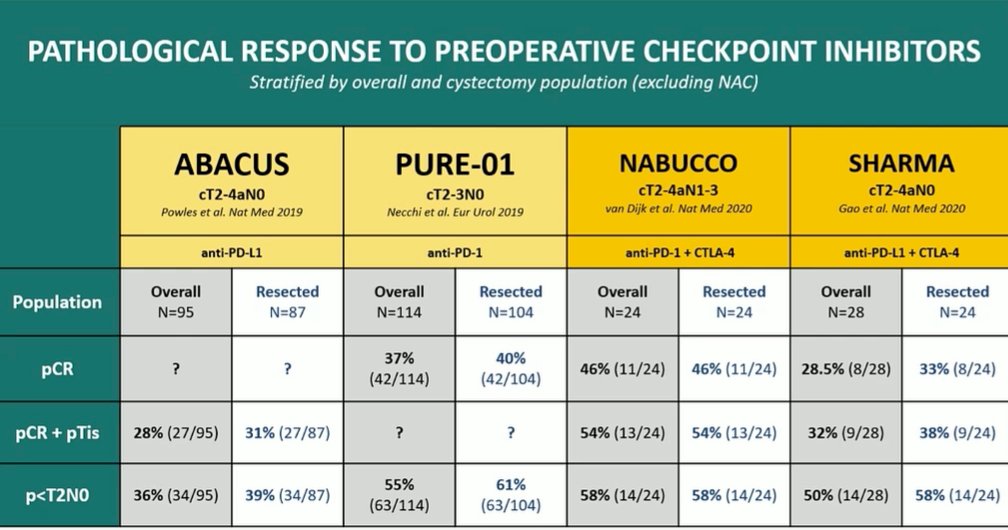 In conclusion, he emphasized that neoadjuvant cisplatin-based chemotherapy is the standard of care. However, the long-term OS benefit is potentially limited and may be augmented by adjuvant checkpoint inhibition though OS data is still needed.