— In KEYNOTE-426, a phase 3 randomized controlled trial comparing pembrolizumab+ axitinib versus sunitinib in first-line treatment of aRCC, benefit was demonstrated

In this presented work, the authors’ objective was to evaluate the lifetime survival and cost-effectiveness of Nivo+Ipi compared with other systemic treatments (pembrolizumab+ axitinib, cabozantinib, and sunitinib) for first-line treatment of patients with intermediate/fall-risk aRCC in a US setting.

Evidence was included from CheckMate 214, KEYNOTE-426, and CABOSUN for progression-free survival [PFS] and overall survival (OS) with a median follow-up of 25 months for PFS analysis and 35.4 months for OS analysis.

PFS extrapolations provided a good fit to the trial data, including the apparent plateau in PFS for Nivo+Ipi after approximately two years (Figure 2A). PFS for Pembrolizumab + Axitinib was seen to drop below that of Nivo+Ipi from approximately 18 months and converges toward sunitinib (Figure 2A), which is also reflected in the extrapolated PFS over a 40-year time horizon (Figure 2B). Nivo+Ipi showed a benefit in terms of PFS compared with both sunitinib and pembrolizumab + axitinib over the 40-year time horizon of the model (Figure 2B). 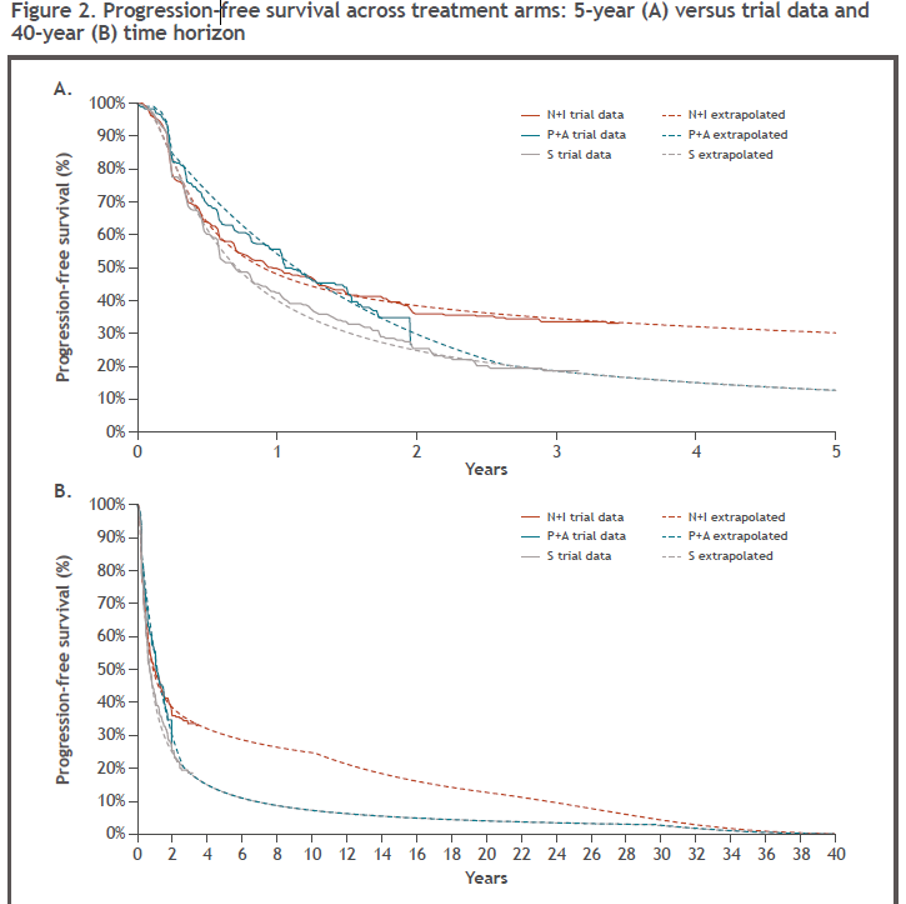 Landmark survival estimates were in line with reported data within the observed trial periods. OS estimates at 5 and 10 years were higher for Nivo+Ipi and for pembrolizumab + axitinib than for Sunitinib (Table 2). While extrapolations fit in-trial estimates well for Cabozantinib, the 5- and 10-year estimates relative to sunitinib estimates were deemed clinically implausibly low, due to the CABOSUN results. This could be due to differences in the availability of subsequent therapies given the timing of both trials.

The five-year extrapolated OS curves were compared with Kaplan–Meier curves, reported in the relevant randomized controlled trial publications (Figure 3A). These extrapolations were in line with data reported from the trials. Over the 40-year model time horizon, the extrapolated OS curve for Nivo+Ipi showed a survival benefit over both sunitinib and pembrolizumab + axitinib, while OS for pembrolizumab + axitinib appeared to converge toward that of sunitinib after ten years (Figure 3B). 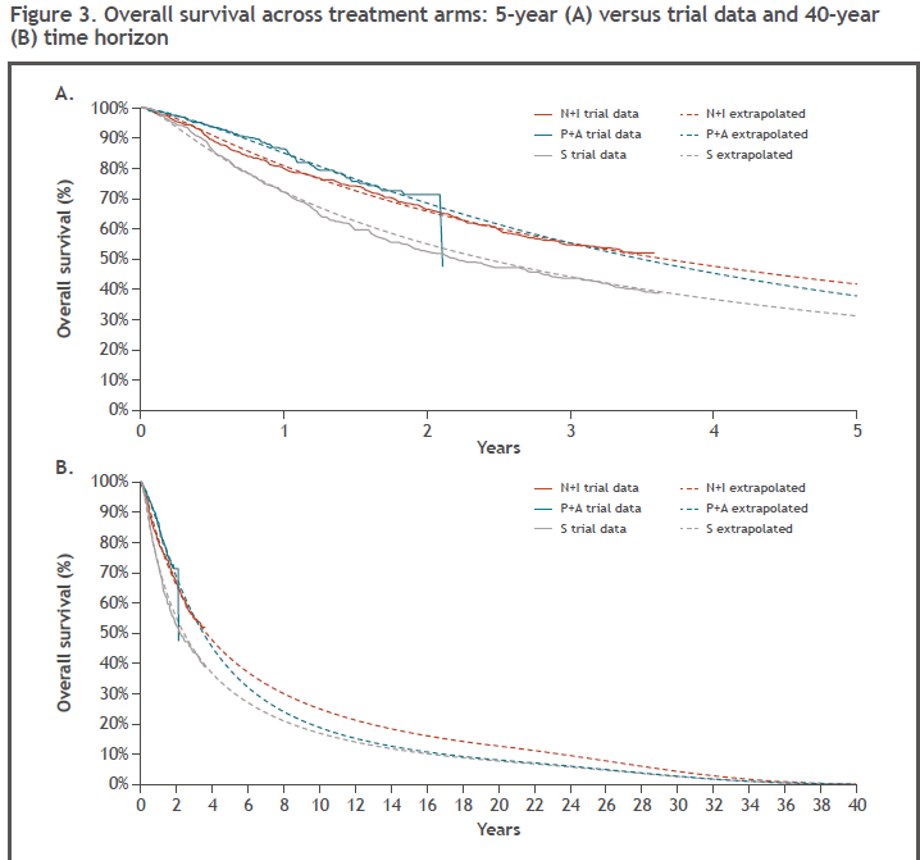 Some of the limitations of this study include the lack of ability to correct for heterogeneity between studies. Also, the follow-up for pembrolizuab+axitinib was limited at the time of analysis, and survival data from KEYNOTE426 were immature.

In conclusion, Nivo+Ipi offers aRCC patients with intermediate or poor-risk a potential cost-effective treatment option with higher estimated mean long-term survival versus other first-line treatments in the United States. Over a lifetime, Nivo+Ipi led to increased survival when compared to sunitinib and pembrolizumab + axitinib with lower total incremental costs, when compared to sunitinib and compared with pembrolizumab + axitinib treatment.

When putting it all together, these results suggest that Nivo+Ipi is a more effective first-line treatment than pembrolizumab + axitinib and sunitinib.