(UroToday.com) Combination immune checkpoint blockade (ICB) therapy with the anti-PD1 antibody nivolumab in combination with the anti-CTLA4 antibody ipilimumab (nivo + ipi) is approved as a first-line therapy option in advanced renal cell carcinoma based on the Phase III CheckMate 214 trial. In the most recent update on trial patients, with a minimum follow-up of 42 months, this combination continued to demonstrate improved progression-free and overall survival relative to sunitinib. 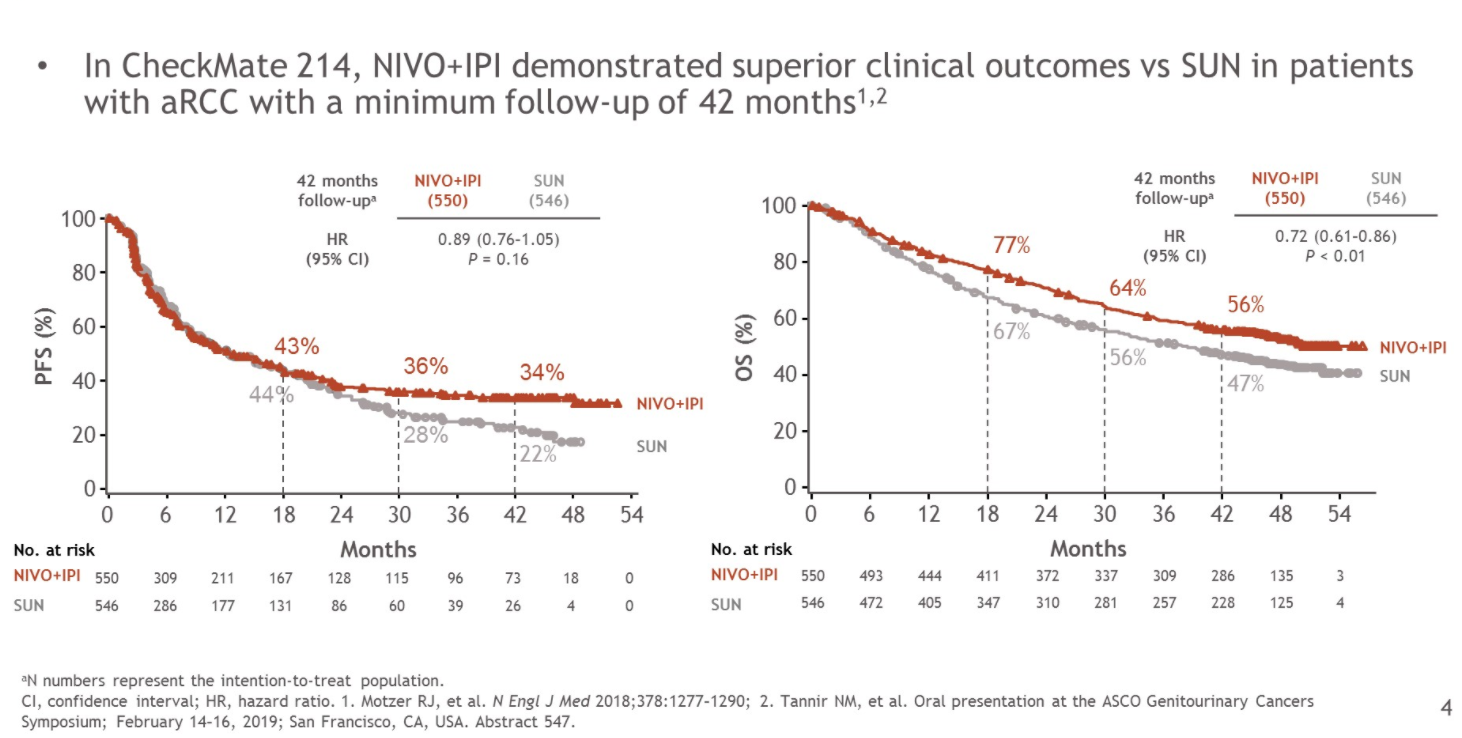 The biomarkers of response to therapy remain to be fully characterized. In this presentation, Dr. Robert Motzer presented an analysis of the molecular correlates studied from pre-treatment biopsies of patients enrolled on CheckMate 214. The framework for molecular analysis is shown below. The vast majority of samples were profiled for either tumor-specific PD-L1 or combined (tumor and immune cell) PD-L1 expression by immunohistochemistry. Just under half the samples in each arm underwent DNA profiling by whole-exome sequencing, and approximately 100 samples in each arm were profiled by RNA sequencing. 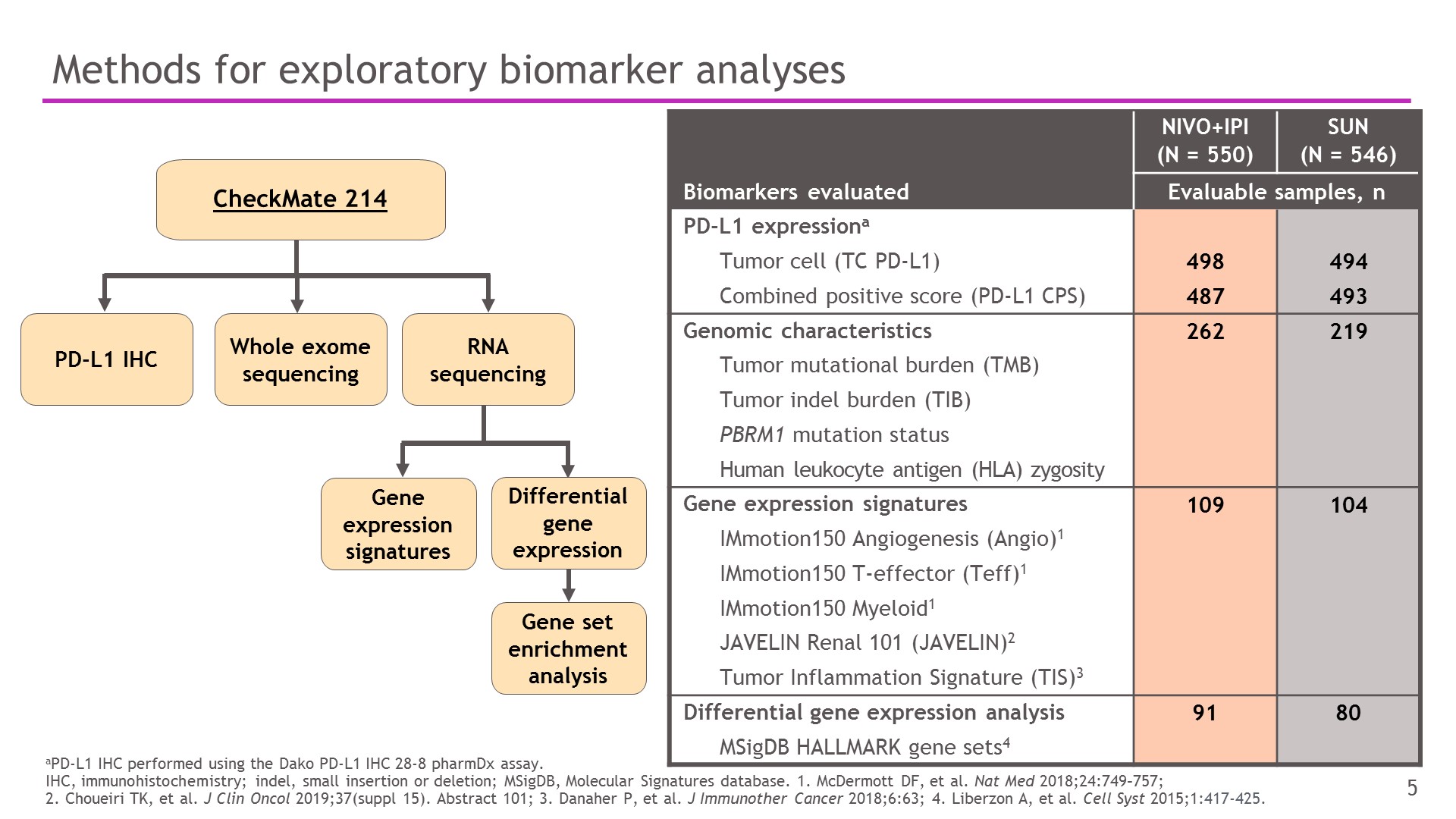 Neither tumor cell nor combined tumor and immune cell positivity for PD-L1 expression were associated with overall survival. 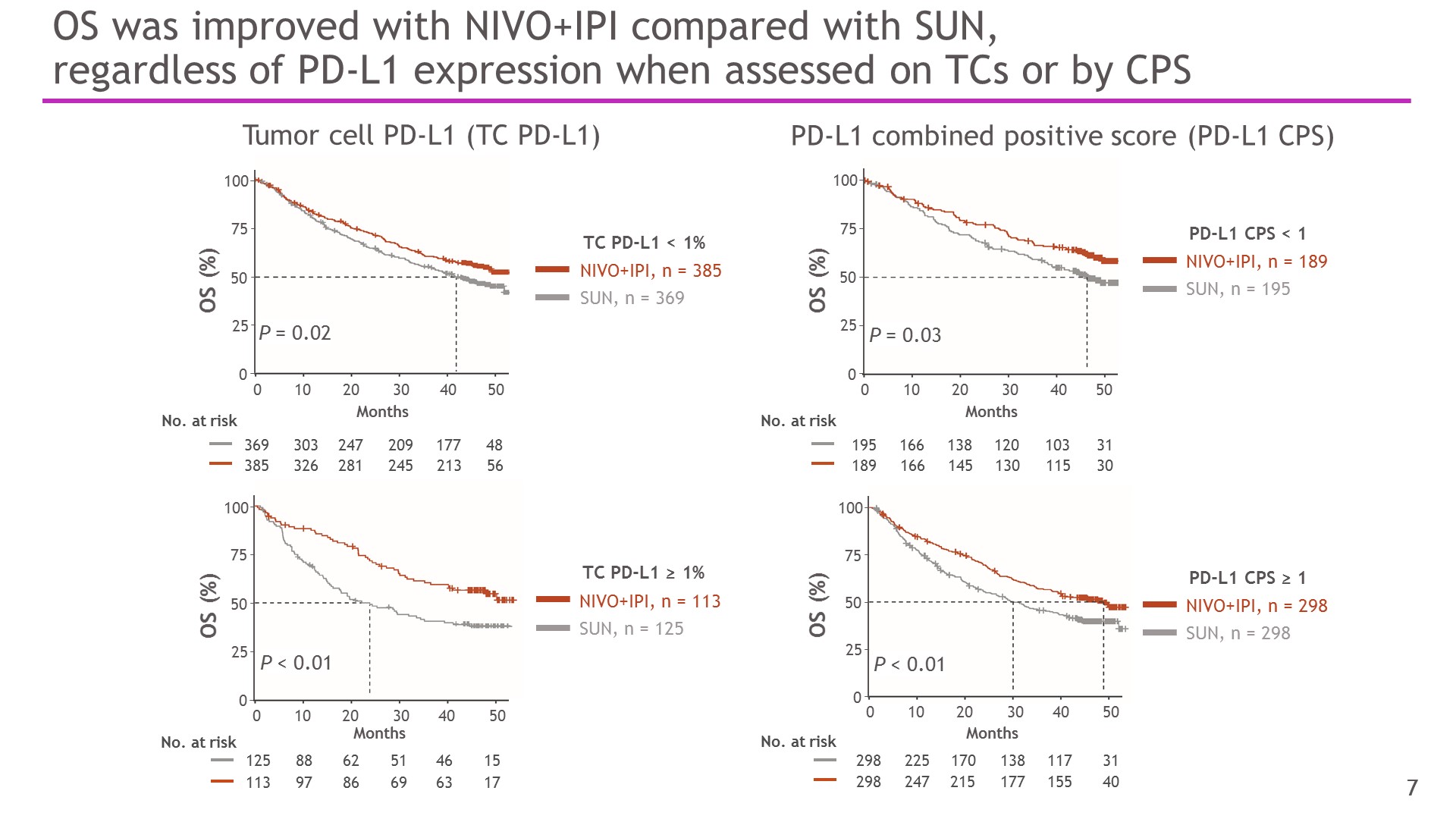 For samples subjected to whole-exome sequencing, the association between response and four previously reported genomic metrics were analyzed: (1) tumor mutational burden (higher or lower than median, (2) tumor indel burden (higher or lower than median), (3) PBRM1 mutation status, and (4) HLA zygosity. As shown below, none of these metrics were associated with overall survival in patients treated with nivo + ipi, however, a high tumor indel burden was associated with improved progression-free survival (PFS) in patients treated with sunitinib. 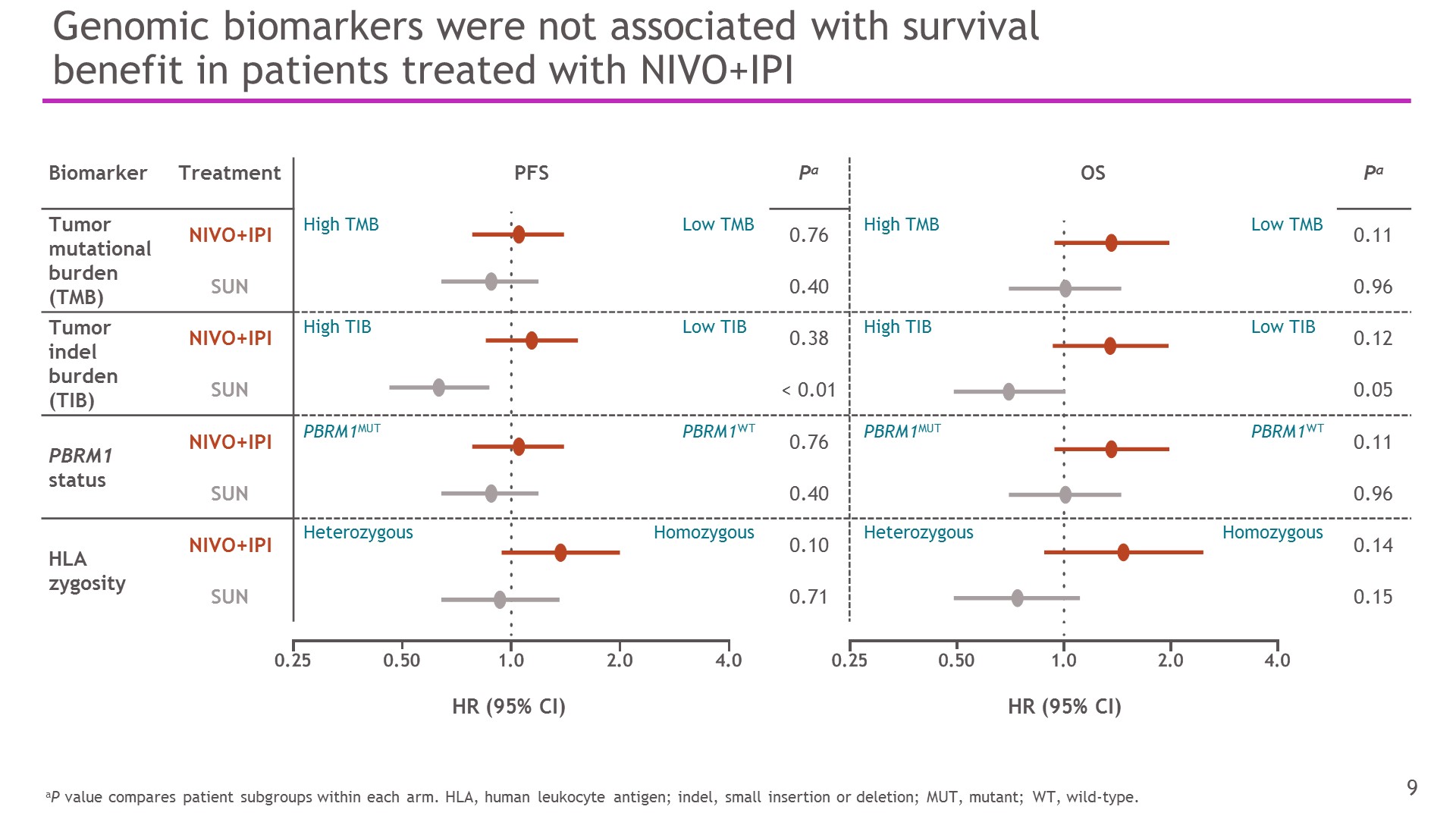 Two types of analysis were done on RNA expression data from CheckMate 214 samples. First, previously derived RNA expression signatures associated with angiogenesis or immune infiltration were applied. Sunitinib treated tumors with a high INMotion 150 angiogenesis score did have better PFS (hazard ratio [HR] ~0.6, p = 0.02), but this did not extend to overall survival. As shown below, no association between survival and immune-related gene expression signatures was observed. Dr. Motzer noted that these signatures were developed in patients treated with PD-1/PD-L1 axis ICB +/- anti-VEGF therapy and not in patients treated with anti-CTLA4 therapy, which may limit their applicability in this context. 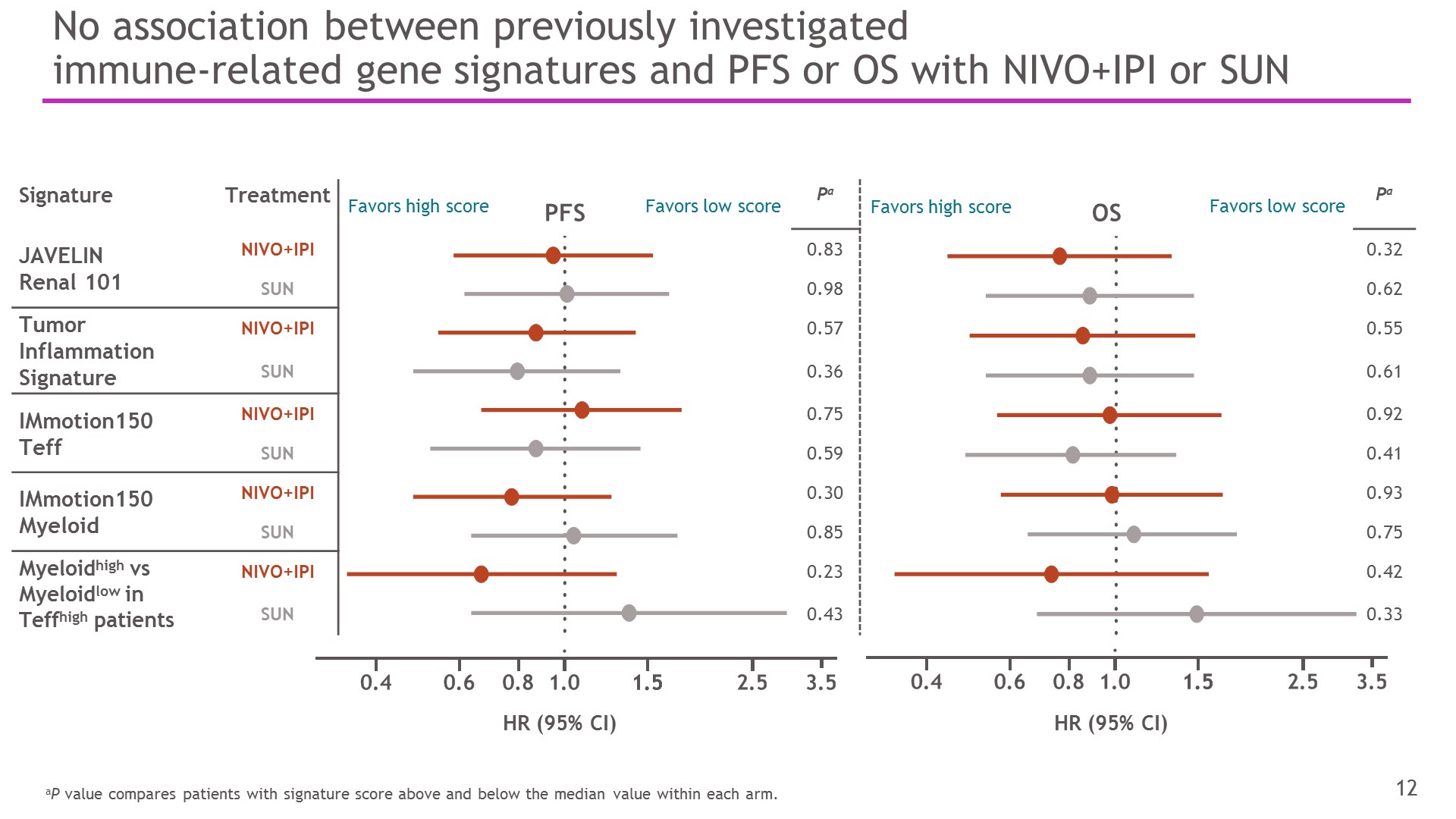 Finally, gene set enrichment analysis was used to compare patients at relative extremes of response to identify biological processes associated with outcome. Tumor sample RNA expression from patients with a progression-free survival of less than 18 months were compared to the same from patients progressing after 18 months of therapy. Enriched gene sets are shown below. 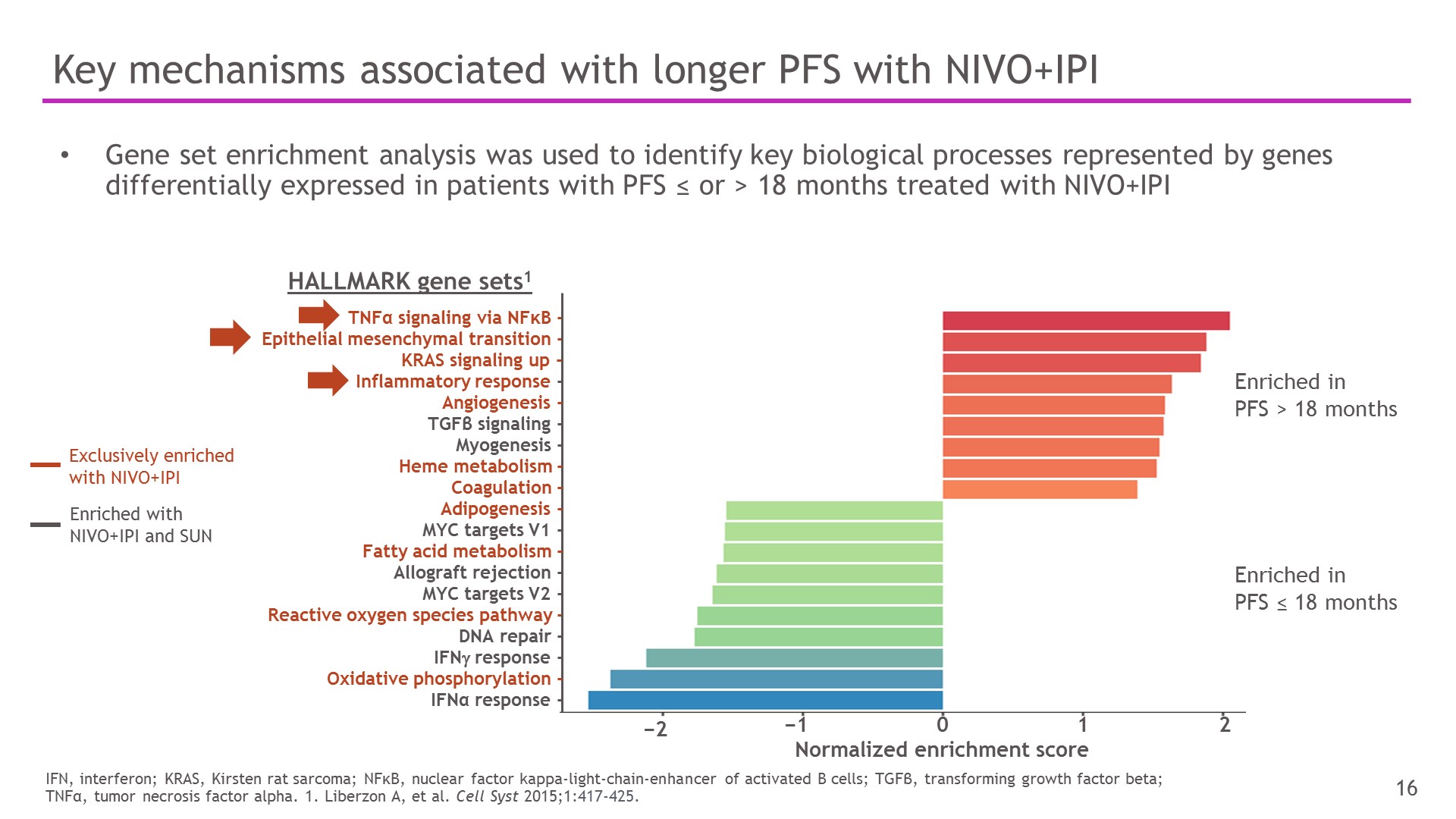 In summary, the genomic and expression biomarkers evaluated were not associated with patient outcome for those treated with nivo + ipi, though high tumor indel burden and angiogenesis score expression were associated with improved PFS in sunitinib-treated patients. Further analysis is required to validate the gene set enrichment results seen and identify additional biomarkers relevant to nivo+ipi treatment.