Dr. Kollmannsberger notes that the management of refractory germ cell tumors is difficult, as these patients often fail to respond and ultimately do quite poorly. Several small studies have assessed agents in this disease space, including everolimus, imatinib, pazopanib, sunitinib, tivantinib, and oxaliplatin + bevacizumab, all with generally no response rate or at best minimal response. APACHE is an open-label, randomized, three-stage, phase 2 study of patients who have failed ≥2 chemotherapy regimens that received durvalumab 1.5 gr q4w, x 13 cycles (arm A) or durvalumab plus tremelimumab 75 mg q4w, x 4 cycles, followed by durvalumab alone x total 13 cycles (arm B). As Dr. Kollmannsberger highlights, the combination arm had a very modest activity with a response rate of 5% and a median OS of 5.25 months.

The biologic rationale for immunotherapy in refractory germ cell tumors is that PD-1/PD-L1 expression is present in >50% of cases, there are tumor infiltrating lymphocytes present in approximately 40-50% of cases, and there is a T-cell inflamed microenvironment present in 40-50% of cases. However, the mutational burden for these patients is low and there is very low to absent microsatellite instability. So, Dr. Kollmannsberger questions whether germ cell tumors are a good immunotherapy target. As he notes, there are several ongoing phase II clinical trials in this population: 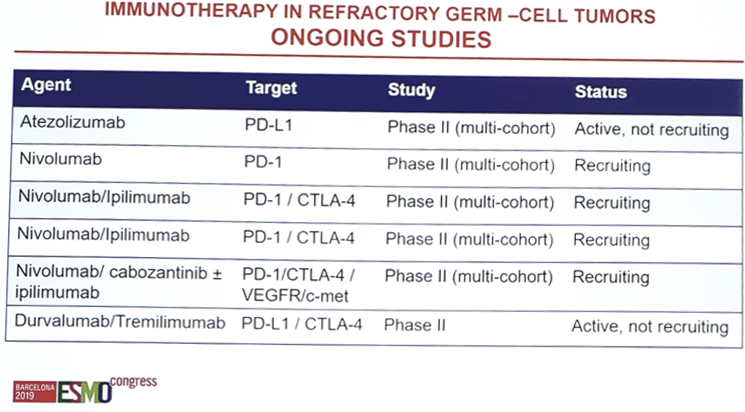 Dr. Kollmannsberger’s conclusions from the APACHE study are as follows:

Discussing Dr. Seidel’s abstract assessing the prognostic impact of HGC in seminoma patients, Dr. Kollmannsberger notes that this study assessed pre-orchiectomy, not post-orchiectomy HCG levels, which is not typically the case when assigning a prognosis. In a multivariable analysis from this study, an HCG level >= 2,000 was associated with a HR of 3.59 (95% CI 1.01-12.77, p=0.048) for mortality. Dr. Kollmannsberger notes that HCG levels >2,000 are very rare, as there were only 17 patients in the current study and 15 patients in the original IGCCCG analysis.1 In his opinion, data on the prognostic value of pre-chemotherapy elevated HCG levels in metastatic seminoma is controversial, as it is not prognostic in IGCCCG nor other studies.

There are several open-ended questions based on the data presented by Seidel and colleagues: (i) Pre- or post-orchiectomy markers: which one is reflective of tumor load? In personal communication with Dr. Seidel, Dr. Kollmannsberger notes that post-orchiectomy/pre-chemotherapy HCG was not significant in this study; (ii) What about pathology review? Is a seminoma with an HCG of 20,000 a pure seminoma or may there be a non-seminoma component? As Dr. Kollmannsberger points out, seminoma with syncytiotrophoblasts and choriocarcinoma can be difficult to differentiate. Additional issues with this analysis include that there was an extremely small number of patients in the HCG high group (n=17), an even smaller number of mortalities in the HCG high group (n=5), very wide confidence intervals, there is no information as to how these patients were treated, there was missing treatment information on 22% of patients, and there was no correlation with recurrence-free survival, which is often the norm in testicular cancer studies.

Dr. Kollmannsberger’s concluding remarks on this study are as follows:

The final abstract Dr. Kollmannsberger presented was the IKCC’s survey of kidney cancer patients and caregivers from 43 countries. There were 1,983 responses recorded from 43 countries: 1,400 patients and 583 caregivers. Among the patients, 23% had localized kidney cancer, 33% had no evidence of disease after treatment, and 44% had metastatic disease. The analysis revealed that at diagnosis, 43% of all respondents had no understanding of their RCC sub-type, 38% were not told their subtype at diagnosis, and 11% still did not know their subtype at the time of the survey. While 96% of respondents reported psychosocial impacts, surprisingly, only 50% disclosed them to their healthcare team. Of the 70% of patients who were never asked to participate in a clinical trial, 89% responded they would have “fairly likely” done so if asked. Shared decision making remains aspirational across major cancer centers and community hospitals: globally, 29% of all patients reported no involvement in their treatment decision, responding ‘my doctor decided for me’.

Dr. Kollmannsberger notes that there are several limitations and potential biases from this survey including: (i) what were the eligibility/inclusion criteria? (ii) how many responses were there per question? (iii) Do respondents represent the population at large (selection bias)? (iv) What was the non-response rate? (v) Within which time period from the cancer diagnosis was the survey administered (recall bias)? (vi) Did the patients fill out the survey repeatedly (response bias)? (vii) There was a standard set of questions, but patients were from diverse backgrounds, cultures, and levels of education.

Dr. Kollmannsberger’s conclusions from this study are as follows: