Barcelona, Spain (UroToday.com) Though significant progress has been made in elucidating molecular alterations in metastatic castration-resistant prostate cancer (mCRPC), no biomarker-selected targeted therapeutic options have existed in this disease until today. Dr. Hussain and colleagues presented analysis of the PROfound study, a randomized phase III biomarker driven trial in mCRPC of olaparib in patients harboring alterations in selected DNA damage repair genes that contribute to homologous recombination repair.

In order to be included on study, patients had to have mCRPC, have had disease progression on either enzalutamide or abiraterone, and have alterations in one more pre-selected DNA damage repair genes as assays by a customized FoundationOne® sequencing test. Patients with a DNA damage repair alteration were stratified into 2 cohorts: (1) Cohort A with BRCA1, BRCA2 or ATM alterations, as these have the strongest preclinical and prior trial support data, and (2) Cohort B with other alterations as shown below. Patients in each cohort were randomized 2:1 to either olaparib 300 mg BID or physician’s choice of therapy. Patients progressing on physician’s choice therapy could crossover to olaparib upon progression. The primary endpoint was radiographic progression-free survival by multiple criteria in cohort A. 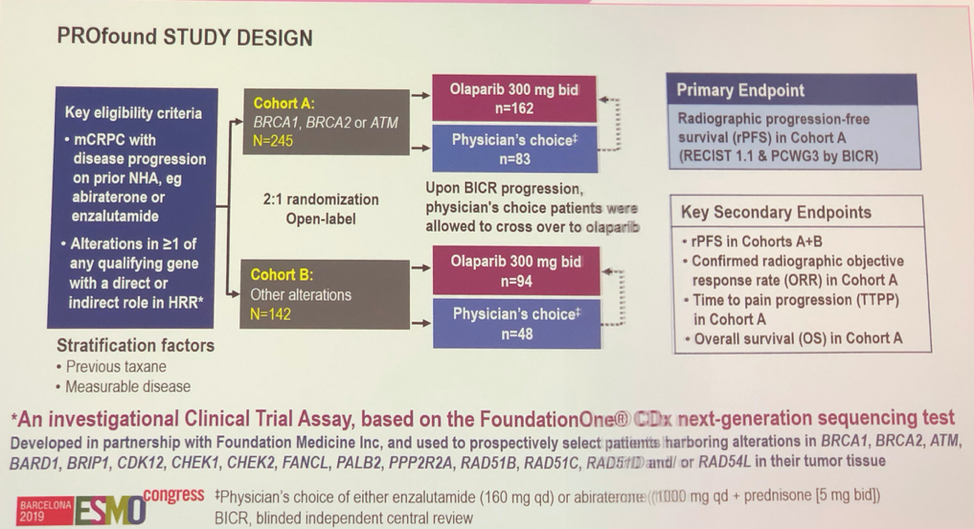 A total of 245 patients were recruited to cohort A, and 142 patients were recruited to cohort B. Of note in the tables below is that the median PSAs in each cohort between the olaparib and physician’s choice cohorts were different, though the interquartile ranges were similar. Other notable patient characteristics are that age was well balanced with patients in their 90s enrolling on trial, most patients had received prior taxane, and about a quarter of patients presented with de novo metastatic disease, 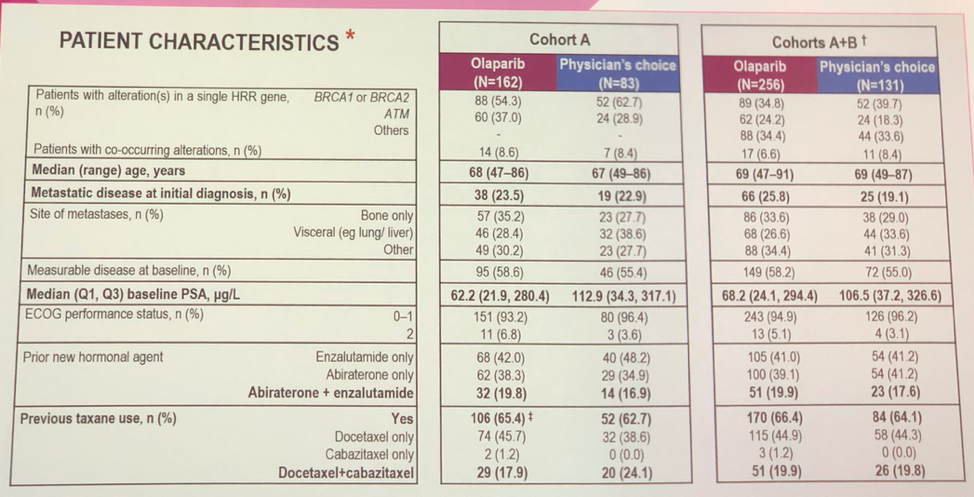 Treatment in this cohort was reasonably well tolerated in this heavily pre-treated population though more adverse events were reported in the olaparib arm. Anemia, nausea, fatigue, asthenia and decreased appetite were the most common adverse effects. 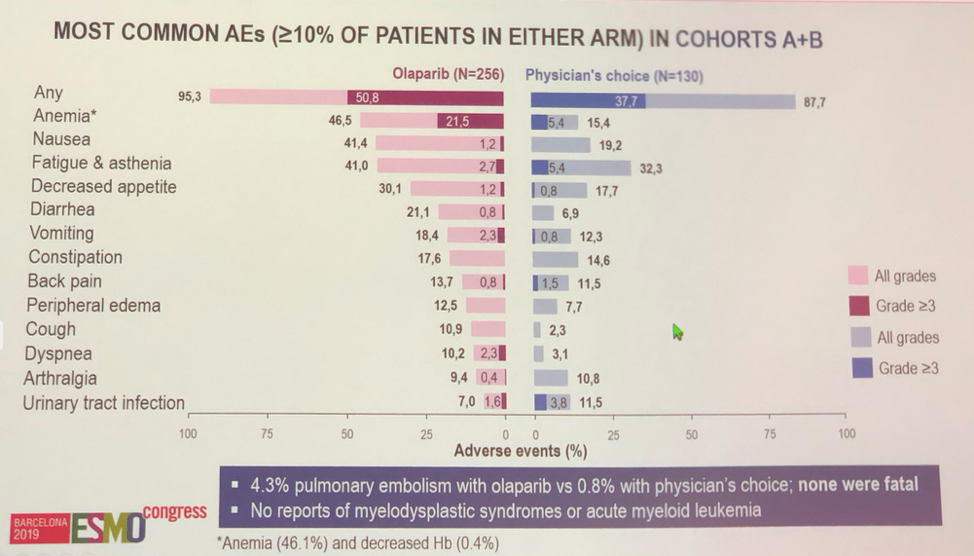 With regards to outcome, the trial met its primary outcome and showed a statistically significant benefit for radiographic progression free survival for olaparib. Subgroup analysis showed that all subgroups tested received benefit from olaparib. The olaparib arm also had superior secondary endpoints, with a clearly superior overall response rate (OR 20.86, P< 0.0001), and time to pain progression (HR 0.44, P = 0.0192). Though survival data are immature, there is a clear trend towards an overall survival benefit with olaparib both in cohort A alone, as well as in all trial patients in an intention to treat analysis. 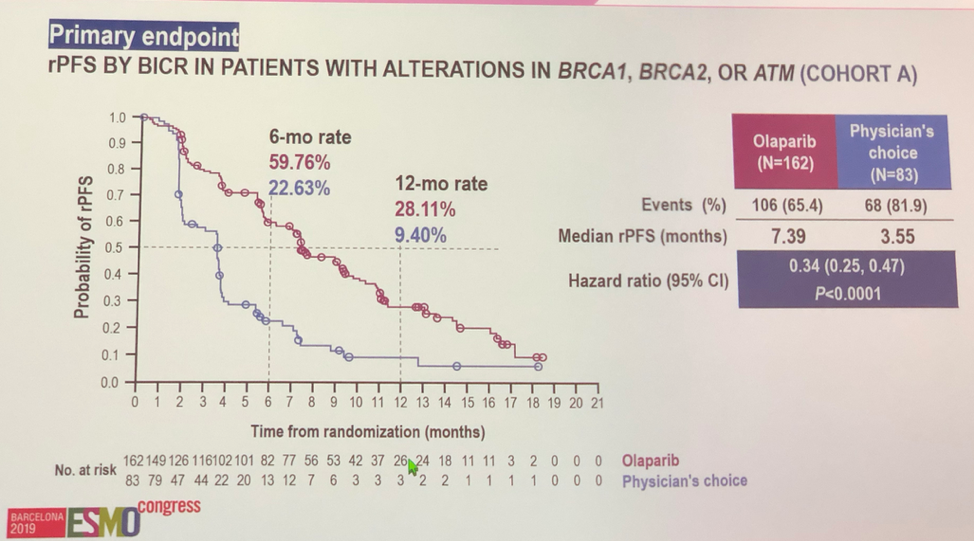 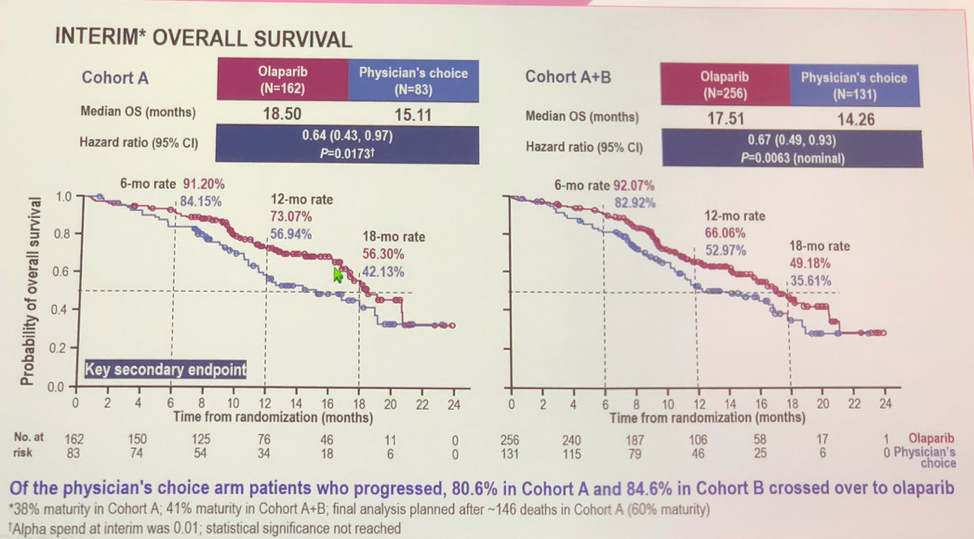 Finally, an exploratory analysis was conducted to look at the gene-by-gene effect on radiographic progression free survival. Though not a directly tested outcome that may be confounded by multiple factors, BRCA2 mutation seemed to have the greatest predictive value of response to olaparib.

In summary, Dr. Hussain argued that olaparib for patients with selected DNA damage repair gene alterations should represent a new standard of care for mCRPC patients who have progressed on abiraterone or enzalutamide, regardless of prior treatment with taxane chemotherapy. This finding represents the first randomized phase 3 biomarker driven clinical trial in mCRPC, and offers another therapeutic option to prolong the lives of patients with this disease and defects in DNA damage repair in their tumors.