Barcelona, Spain (UroToday.com) Men who undergo surgery as definitive therapy for their localized prostate cancer generally only receive subsequent radiation therapy if their surgical pathology shows certain adverse pathologic features (adjuvant radiotherapy) or if they experience biochemical recurrence (salvage radiotherapy). Given prior conflicting clinical trial data that utilized outdated definitions and assays for biochemical recurrence, three trials are underway to compare adjuvant radiotherapy (aRT) with early salvage radiotherapy (eSRT): 1. RADICALS-RT, summarized here, 2. GETUG-AFU 17, and 3. RAVES. The GETUG data has not been publicly presented, but eSRT data was shared for the purpose of the meta-analysis. The RAVES data was presented at ASTRO 2019.

To prospectively aggregate and harmonize the results from these trials in a meta-analysis, the ARTISTIC (Adjuvant Radiotherapy or is it Salvage Therapy International Consortium) was formed in 2014.  The analysis plan includes a phased approach to allow for reporting of outcomes as data matures. Planned subgroups are to be stratified by pre-surgical PSA, Gleason score, seminal vesical invasion, surgical margins, as well as CAPRA-S validated risk groups. The data reported at ESMO is a meta-analysis of event-free survival, defined as time from randomization until any of: 1. PSA ³ 0.4 ng/mL and rising, 2. clinical progression, 3. initiation of non-trial treatment, 4. death from prostate cancer after radiotherapy, or 5. PSA ³ 2.0 ng/mL any time after randomization.

Though all trials have randomized patients to aRT or eSRT, several key differences exist as illustrated in part in the trial characteristics summary image below. Notably, RADICALS-RT had a more stringent definition for biochemical recurrence, allowed for two different RT regimens, and has a primary outcome of freedom from distant metastasis. The GETUG and RAVES trials define recurrent as PSA ³ 0.2 ng/mL and have endpoints of event free survival and freedom from biochemical failure, respectively. Additionally, RAVES was designed as a non-inferiority trial. Finally, the GETUG trial mandated concurrent short course hormonal therapy with radiotherapy. 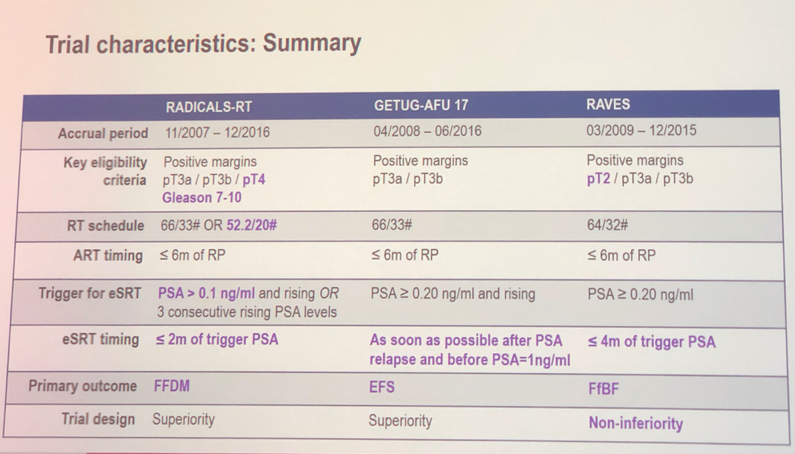 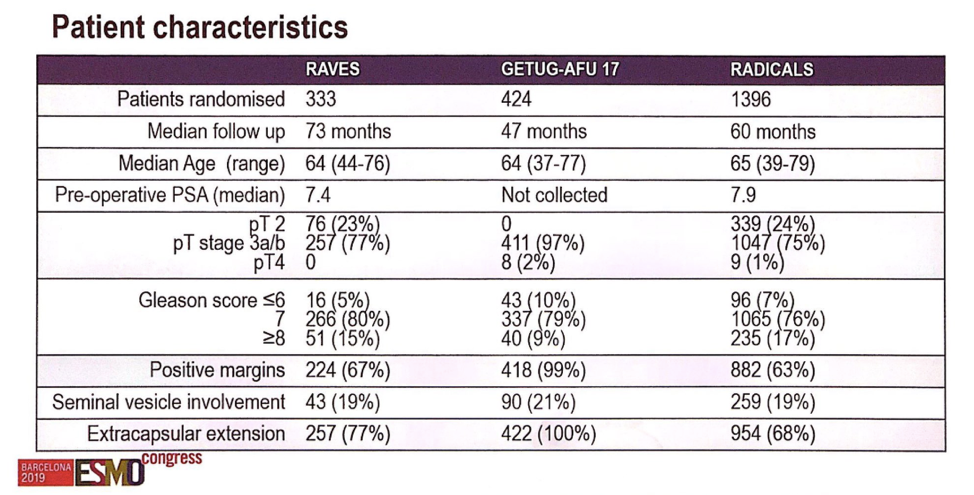 Across the three trials, 1074 men were randomized to aRT, and 1077 were randomized to the eSRT arm. Of the eSRT cohort, 37% have received radiotherapy. There have been 248 failure events, dominated by biochemical failures, and the overall event free survival rate at 5 years approaches 90%. The forest plot for event-free survival by treatment is shown below.

Though not statistically significant, the meta-analysis suggests a small potential absolute benefit for eSRT at 5-year follow-up with regards to event free survival. There is no clear benefit for adjuvant radiotherapy in this cohort. Longer-term outcomes such as freedom from metastasis and overall survival will take much longer to report. It remains unclear whether there is a role for adjuvant radiotherapy therapy in some men, but the ARTISTIC effort may be uniquely powered to detect this given their pre-planned subgroup analyses.