Dr. Bellmunt highlighted that NABUCCO was a single-arm phase IB trial testing the feasibility of pre-operative ipilimumab + nivolumab in stage III urothelial carcinoma patients who were either cisplatin ineligible or refused chemotherapy. Feasibility was the primary endpoint, which was met in that 96% of patients had a radical cystectomy within 12 weeks of the first infusion. Safety was a secondary endpoint: 55% of the total population had grade 3-4 treatment related adverse events, which decreased to 42% when excluding clinically insignificant lipase elevations. 30-day mortality was 0% and one patient suffered 90-day mortality from progression of disease. Although a small study, it was quite efficacious given the setting of locoregionally advanced disease and a pCR rate of 46%, as well as a noninvasive disease rate of 58%. A subset of patients showed a pCR in the bladder, with an abundant immune infiltration, accompanied by lymph node micrometastasis (mixed response) – the clinical significance of a mixed response is not yet known. As such, we have good evidence that neoadjuvant/preoperative immunotherapy works for bladder cancer with pCR rates ranging from 29%-46%: 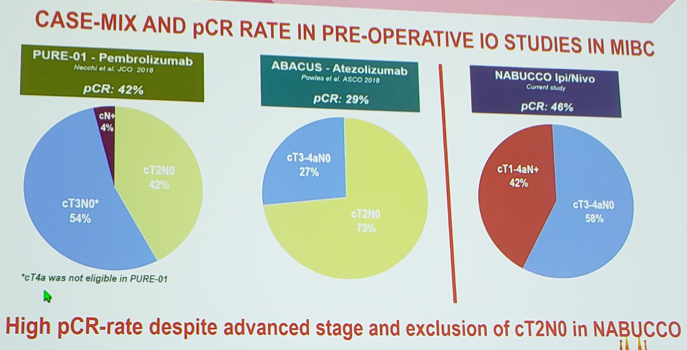 Dr. Bellmunt notes that there are other ongoing nivolumab/ipilimumab neoadjuvant trials ongoing:


Dr. Bellmunt highlighted the following comments for the NABUCCO trial:

The subset analysis of the PURE-01 study investigated FGFR3 alteration as a predictor of non-response to neoadjuvant pembrolizumab for patients with muscle-invasive bladder cancer. The PURE-01 protocol was amended to include a more heterogeneous population (n=136) and focused on potential predictive markers. Necchi and colleagues found that FGFR3 alterations are not associated with pathologic response to pembrolizumab: 29.5% of patients harbored ESCAT tier >=1-2 genomic alterations suggesting benefit from approved or investigational targeted therapies. Tier 1B was represented by FGFR3 genomic alteration (n=17, 15.2%). Furthermore, there were no significant differences in the frequency of genomic alterations between the pathologic response categories, including FGFR3 genomic alteration. The Immune190 score is an expression of immune genes inversely correlated with PPAR-gamma expression. The RNA immune signatures are statistically significantly associated to pathological response to neoadjuvant pembrolizumab but not neoadjuvant chemotherapy. Dr. Bellmunt notes that genetic alteration is a vague term and we need to better define SNV or mRNA expression. Additionally, he notes that there is conflicting evidence as to what FGFR alteration tumors response best to: in 22 patients previously treated with immunotherapy, the ORR was 59% for erdafitinib. Further work assessing how best to treat FGFR alteration patients is required.