Munich, Germany (UroToday.com) LATITUDE is a double-blind, placebo-controlled, phase 3 trial which randomized patients with metastatic castration sensitive prostate cancer (mCSPC) to ADT + Abiraterone + Prednisone or ADT + Placebo1.  In addition to having metastatic disease, eligibility also required the presence of two of three high-risk features, including a Gleason score of 8, at least 3 bone lesions, or the presence of visceral metastases.

This landmark study demonstrated that there is an overall survival benefit for giving upfront abiraterone in patients with newly diagnosed metastatic prostate cancer, similar to the results seen in STAMPEDE2. In LATITUDE, median overall survival was not reached compared with 34.7 months in the placebo group, with a hazard ratio for death of 0.62. In STAMPEDE, the hazard ratio was 0.61. These two studies led to the approval up front abiraterone and were practice changing.  This abstract explores the relationship between PSA response and correlation with overall survival and radiographic progression-free survival. 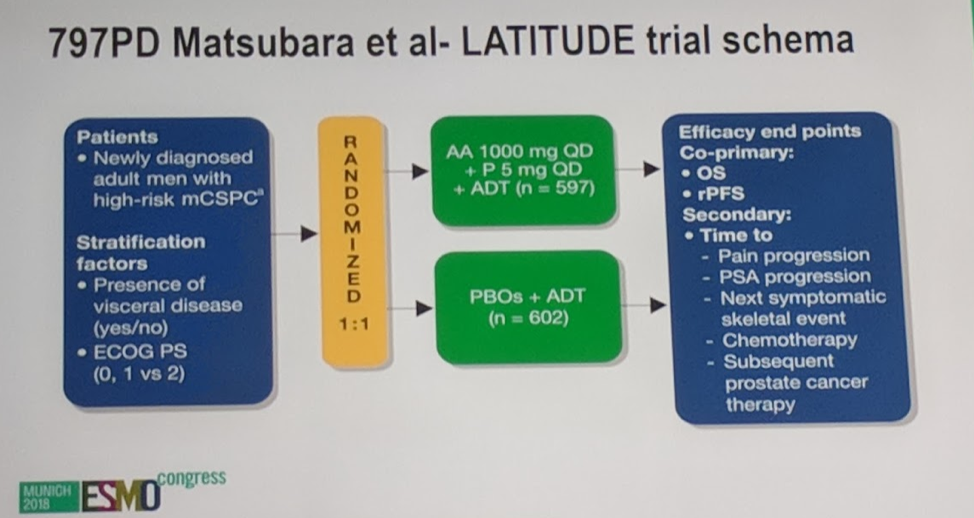 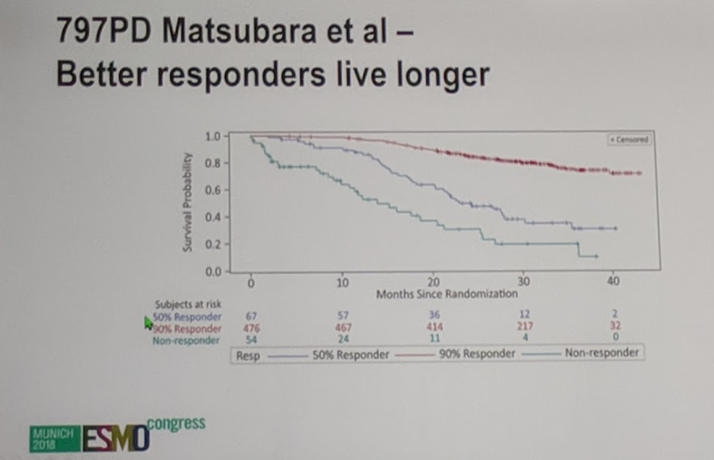 Compared to placebo + ADT, AAP increased the percentage of patients achieving a PSA <0.2 at 3, 6, and 12 months. 58% of patients receiving AAP attained a PSA<0.2 compared with 12.8% of patients on placebo+ADT. The median PSA nadir for patients on AAP was 0.09 ng/mL compared with 2.36 for patients on placebo+ADT. The time to nadir was explored as well and those who have a greater time to nadir do better, as they typically have a lower nadir, which is better for prognosis.  AAP dramatically increased the time to PSA progression compared with placebo+ADT (33.2 months vs 7.4 months), and this time to PSA progression strongly correlated with radiographic PFS. 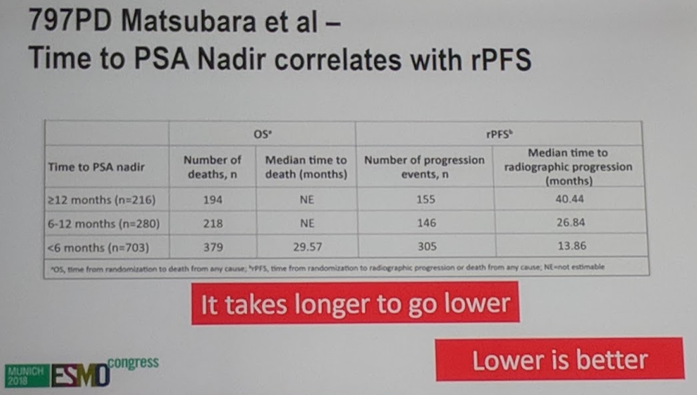 Abiraterone and docetaxel have greatly improved the overall survival of our patients with metastatic castration sensitive prostate cancer (mCSPC). This is terrific for our patients but has made it more challenging to design clinical trials as median overall survival data has not yet been reported for LATITUDE but is over 3 years and radiographic progression-free survival was 30.8 months. Thus, several investigators are looking to discover surrogate endpoints which may help guide future clinical trial development.

The discussant raised several important points regarding the data variables discussed here, namely PSA nadir and time to PSA nadir. While these variables were prognostic, they can only be determined in a retrospective fashion and thus are challenging to use in the clinic. In terms of PSA response and correlation to rPFS and OS, this is clearly dependent on the therapy and thus will not always correlate with overall survival. This will be very challenging to use as PSA response clearly depends on the therapy, and there have been some therapies with minimal PSA response but with overall survival, namely Radium 2234 and Sipeulecel-T5.

During the Q&A session, several additional points of analysis were brought up which may be interesting to correlate with overall survival, including the rate of PSA decline and early PSA response at 4 weeks. It will also be important to establish relationships between the biology of patients and their therapies with PSA and radiographic response.