(UroToday.com) The European Association of Urology 2021 Annual Meeting included a joint session of the EAU and the Advanced Prostate Cancer Consensus Conference and a discussion regarding current gaps in the evidence, specifically adjuvant versus early salvage radiotherapy. Participants in this discussion included Drs. Derya Tilki, Gert De Meerleer, Alberto Bossi, and Arnulf Stenzl.

Dr. Tilki started by presented the case of a 67-year-old male who underwent a TRUS biopsy that demonstrated high-risk prostate cancer: Gleason 5+4 in 12 out of 12 cores positive for prostate adenocarcinoma. His PSA was 12 ng/ml, his DRE was 40 grams and he was cT2c. His mpMRI was suggestive of T3b prostate cancer, his family history was negative for malignancy and he had no relevant medications or comorbidities. Dr. Tilki notes that in view of the evidence of the randomized, multi-center proPSMA trial1, replacing bone scan and abdominopelvic CT with more sensitive imaging modalities may be a consideration in patients with high-risk prostate cancer undergoing initial staging. In the proPSMA trial, PSMA PET/CT had a 27% greater accuracy than that of conventional imaging (92% versus 65%). Also of note for this patient is the significance of Gleason Group 5 prostate cancer. Dr. Tilki states that at diagnosis, patients with primary Gleason 5 disease have a PSA recurrence rate of approximately 55% at 5 years after primary therapy, and this failure rate is likely in great part secondary to micrometastases given the negative conventional imaging at diagnosis. Ultimately, this patient underwent robotic radical prostatectomy and extended lymphadenectomy, with pathologic pT3b, Gleason 5+4, pN0 (0/22), tumor volume 37 mL. The surgical margin was positive with multiple contacts on both sides with contact up to 8 mm of Gleason 4 and 5. The next step in management according to Dr. Tilki is “adjuvant or early salvage radiation, with or without ADT”?

When discussing adjuvant versus salvage radiotherapy it is important to discuss side effects of treatment, which tend to be worse (specifically for cystitis and hematuria) for patients receiving adjuvant radiotherapy: 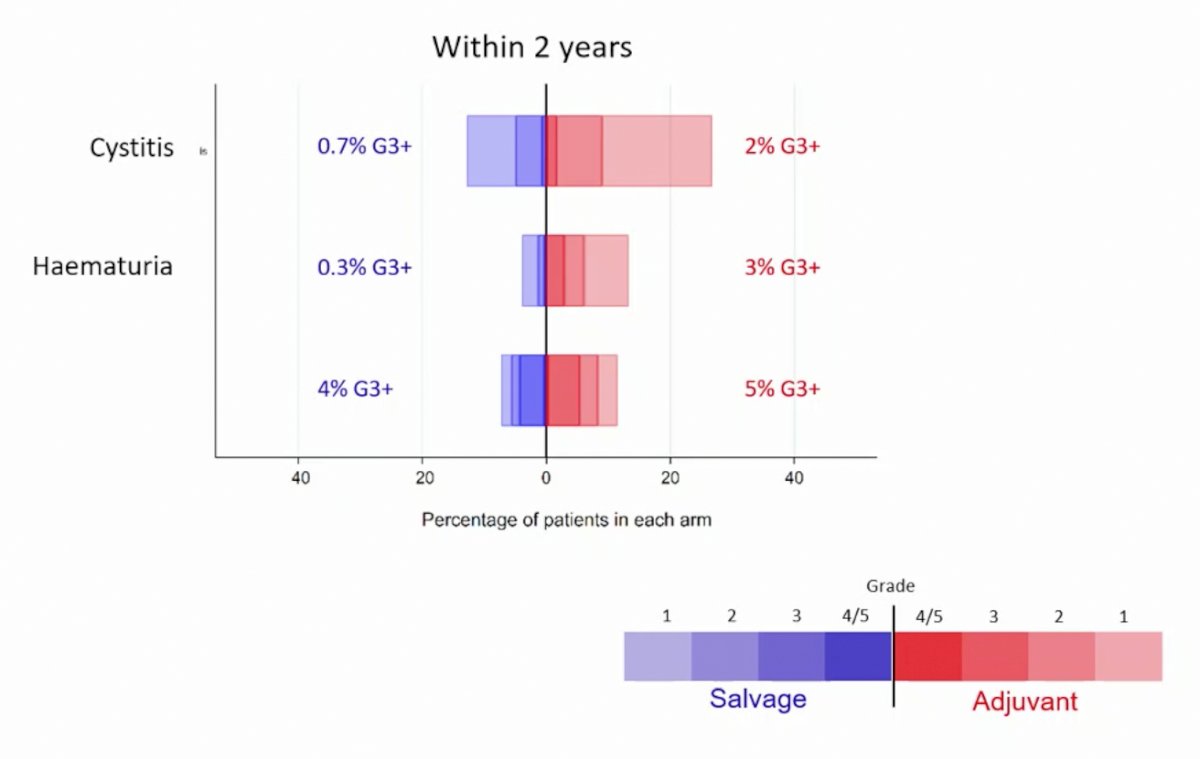 Last month, Tilki and colleagues3 published data evaluating the impact of adjuvant versus early salvage radiotherapy on all-cause mortality risk in men with adverse pathology defined as positive pelvic lymph nodes or pathologic Gleason score 8-10 prostate cancer and disease extending beyond the prostate (pT3/4). Over a median follow-up of 8.16 (IQR 6.00-12.10) years, of the 26,118 men in the study cohort, 2,104 (8.06%) died, of which 539 (25.62%) were from prostate cancer. After excluding men with a persistent PSA, adjuvant compared with early salvage radiotherapy was associated with a significantly lower all-cause mortality risk among men with adverse pathology at radical prostatectomy when men with pN1 prostate cancer were excluded (HR 0.33, 95% CI 0.13-0.85; p = 0.02): 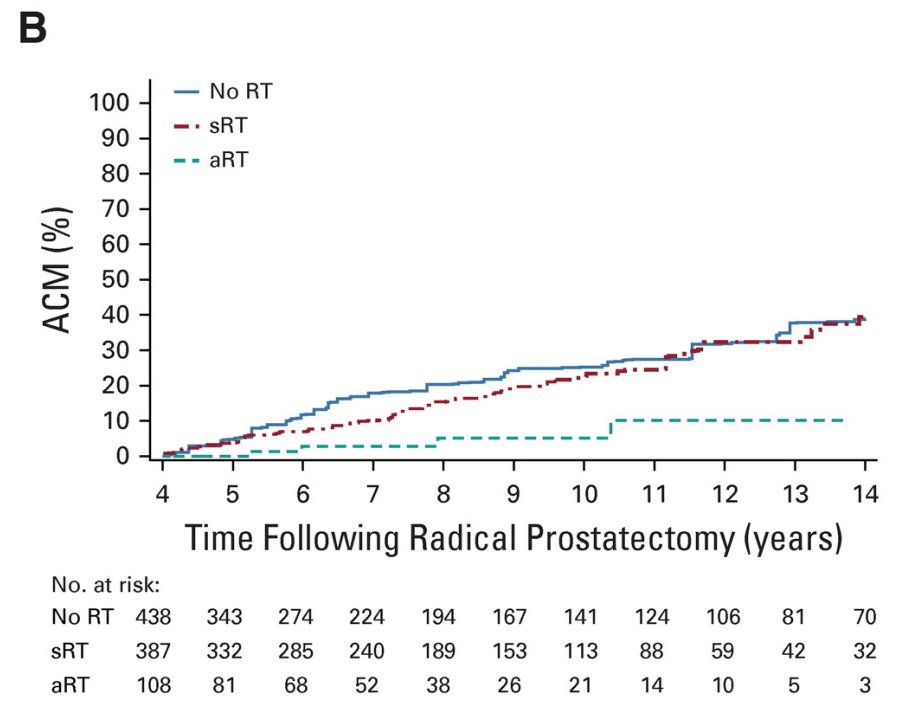 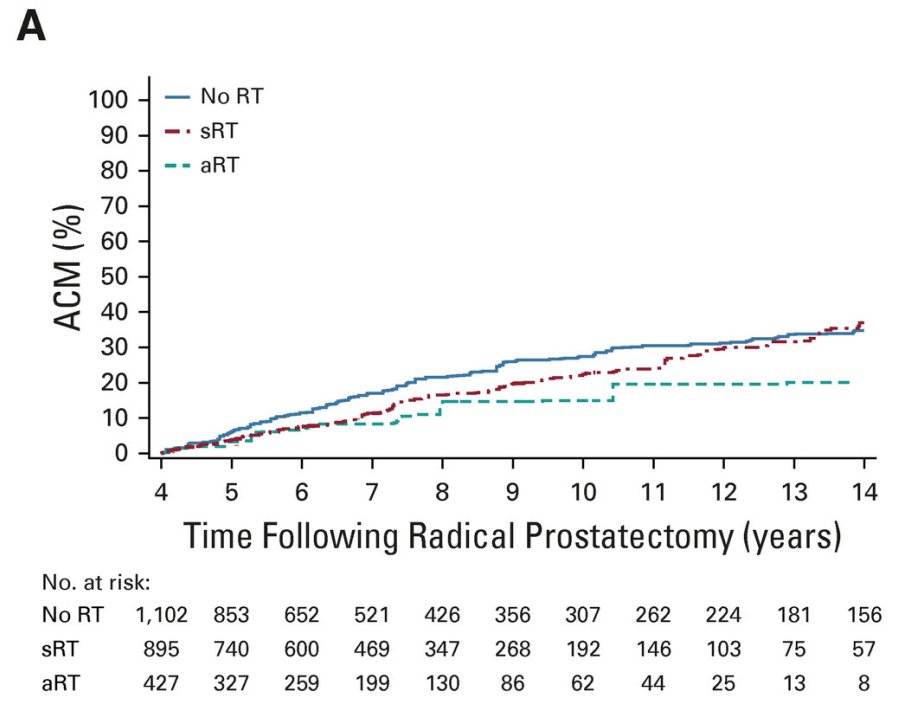 Dr. Bossi then discussed the utility and arguments for early salvage radiotherapy. Dr. Bossi emphasized that in a patient with the pathology report as the aforementioned patient discussed by Dr. Tilki, the two most important questions are (i) what is the risk of a rising PSA? And (ii) what is the risk of death secondary to prostate cancer? Based on available nomograms we know that the risk of rising PSA at 2 years is 54%, at 5 years is 75%, and at 10 years is 86%. The risk of dying of prostate cancer at 15 years is estimated at 20%.

Dr. Stenzl then provided a brief summary of this discussion noting that the recent publications of the RAVES, RADICALS, and GETUG-AFU 17 trials, in addition to the ARTISTIC collaborative meta-analysis, have certainly tipped the favor towards early salvage radiotherapy given the similar efficacy, low/no risk of overtreatment, and decreased side-effects of adjuvant treatment. In his practice, even with high-risk men in which he may consider adjuvant radiotherapy; he is still inclined to wait up until 6 months post-radical prostatectomy in order to allow the patient to fully heal from their operation and perhaps decrease the risk of functional side effects of treatment.