(UroToday.com) As part of the EAU 2020 virtual meeting, the prostate cancer session highlighted a series of talks on the primary treatment of pelvic lymph node metastatic prostate cancer. Karim Touijer, MD, MPH, discussed the role of surgery alone for these patients.

Ultimately, the question is whether locoregional control halts disease progression and metastases. Previous surgical data suggests that in patients with cN0 disease the internal iliac lymph nodes may be positive in 58% of patients, and internal iliac lymph nodes alone may be positive in 19% of patients. Thus, a lymph node dissection along the internal iliac (hypogastric) vessels is essential for representative staging. There are several important considerations for using lymph node dissections for correctly staging patients, including (i) extended pelvic lymphadenectomy being the most accurate staging procedure, (ii) accurate staging may inform and improve future decision making, and (iii) >30% of cN1 patients are in fact pathologically negative.

Furthermore, the EAU guidelines suggest that for patients with locally-advanced disease, clinicians may offer a radical prostatectomy in highly selected patients with cT3b-T4N0 or any T N1 as part of multimodal therapy.2 For these patients, they should also undergo an extended pelvic lymph node dissection given their high-risk prostate cancer.

Taken together, there is a disconnect between the size of positive nodes (median ~4 mm) and the ability of preoperative imaging to detect these nodes: PSMA avid median diameter 7mm; mpMRI median diameter 11.7 mm. Additionally, up to 35% of lymph nodes land outside the site of an extended template lymph node dissection. 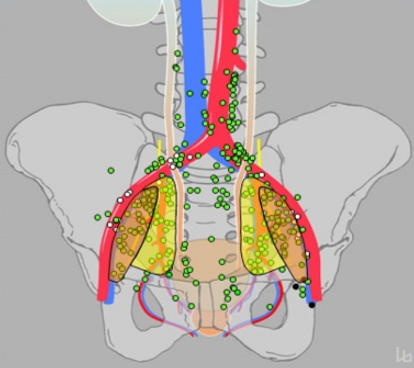 Several challenges that should be part of future directions according to Dr. Touijer include (i) micrometastatic nodes that undetectable by modern imaging, and (ii) micrometastatic nodes on PSMA PET that are outside the extended pelvic lymph node dissection template. The age-old question of whether there is an oncological benefit to treat the lymph nodes will be attempted to be answered by two clinical trials: 1) Role of Lymph Node Dissection in Men with Prostate Cancer Treated with Radical Prostatectomy (PREDICT) and 2) Trial Modifications to Radical Prostatectomy: PLND versus no PLND.

To conclude, Dr. Touijer noted that: