The advanced prostate cancer consensus conference 2017 guideline recommended that imaging be performed at baseline, PSA nadir, and progression, at least in patients with the usual presentation of metastatic hormone-sensitive prostate cancer, and castrate-resistant prostate cancer.

As recommended by the prostate cancer working group 3 consensus statements, PSA progression alone for men on the treatment of metastatic CRPC should not be the sole reason to change therapy.

Based on the growing knowledge, a new endpoint for clinical studies in CRPC was created - the radiographic progression-free survival (rPFS). Recently, a new era had begun with the approval of more than eight drugs in the treatment of castrate-resistant prostate cancer, based on positive studies, including radiographic progression-free survival as an endpoint.

CT scan has several limitations, including a relatively poor performance for the detection of bone metastasis and limited assessment of lymph node metastasis.

Bone scan also has limitations, which include the fact that new bone formations responding to therapy can appear as a new lesion, which is called the ‘flare response.’ Therefore, the prostate cancer working Group 3 guidelines require new bone lesions to be seen on two consecutive scans, and new lesions to be seen on the second scan before progression can be defined. Other limitations include an inherent delay to the need for confirmatory scans and difficulties in quantifying disease and therefore track progression.

According to the European Association of Urology (EAU) guidelines, choline PET/CT, PSMA PET/CT, and MRI provide a more sensitive detection rate of lymph nodes and bone metastasis than the classical work up associated with bone scans and abdominopelvic CT scan. Although it might be tempting to conclude that bone scans and CT scans should be replaced by more sensitive tests in all patients undergoing initial prostate cancer staging, the clinical benefit of detecting metastasis at an earlier time point remains unclear!

The prognosis and ideal management of patients diagnosed as metastatic by these more sensitive imaging tests are currently unknown. It is still unclear whether patients with metastasis, detectable only with PET CT or MRI, should be managed using systemic therapies or whether they should be submitted to aggressive local and metastasis directed therapies.

Dr. Loidl moved on to discuss when additional imaging is needed in castrate-resistant prostate cancer patients:

Dr. Loidl ended his discussion with some important take-home messages. These include the concept that there is clearly a value in PET-PSMA imaging. However, many times there is no significant added value in this imaging to the management plan that has already been decided upon. There are many situations where PET PSMA imaging will not alter the decided treatment plan, and therefore it is not worth performing.

There are many upcoming studies in the near future that will help us answer some pressing questions regarding new generation imaging studies, with various forms of PET scans, including immune-PET with PD-1/PD-L1 (Table 1).

Other compounds that will be assessed with novel imaging include CD8+ T cells antibody fragments, and Granzyme B (a serine protease released from CD8+ T cells and natural killer cells). 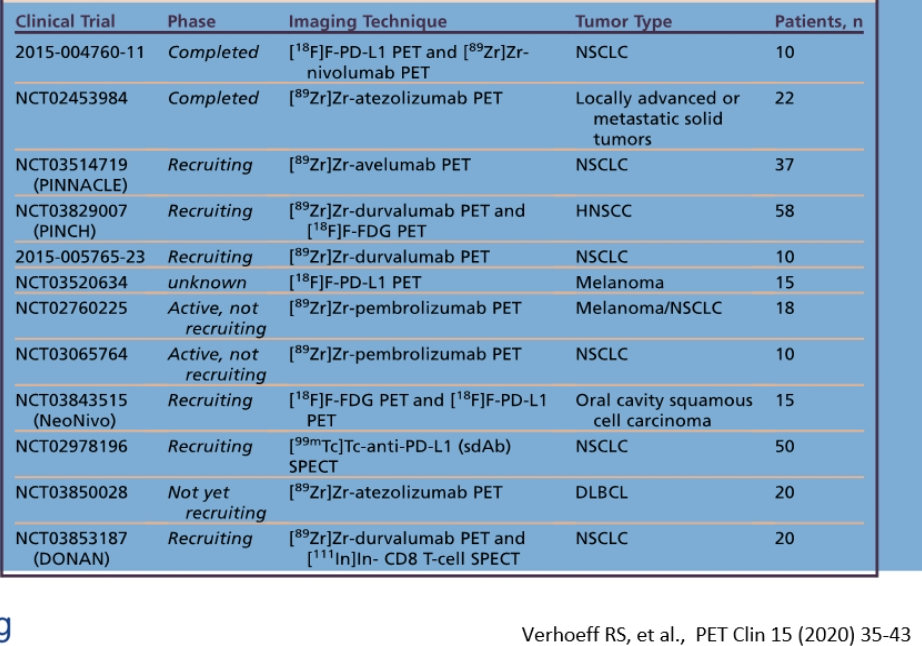