Most patients newly diagnosed with bladder cancer have non-muscle invasive disease (NMIBC). For patients with intermediate or high-risk NMIBC and those with carcinoma in situ (CIS), adjuvant treatment with BCG is guideline-recommended on the basis of proven benefits in disease recurrence. While BCG is efficacious, many patients eventually develop BCG-unresponsive disease and are at risk for tumor recurrence and progression. For many years, there have been very limited options for these patients. Radical cystectomy has remained the gold standard though numerous approaches including intravesical and systemic therapies have been investigated. One of the alternatives to radical cystectomy in patients with BCG-unresponsive NMIBC is nadofaragene firadenovec, a novel intravesical gene-mediated therapy that delivers the human IFNα2b gene resulting in sustained IFNα2b expression, and provided durable responses in a previous Phase 2 trial.

The authors, through the auspices of the SUO CTC, conducted a multicenter, open-label Phase 3 study investigating nadofaragene for high-grade NMIBC (carcinoma in situ [CIS ± Ta/T1], or PD [Ta/T1 alone]) unresponsive to BCG (NCT02773849).

Nadofaragene (3X1011 vp/mL [75 mL]) was administered intravesically once every 3 months for up 4 doses in the initial 12 months. Patients without evidence of high-grade disease at month 12 were offered continued treatment at the investigator’s discretion. While the primary outcome was complete response rate (CR) among patients with CIS which has previously been reported, key secondary end points included rate and durability of high-grade-recurrence-free (HGRF) survival as well as safety.

Patients were stratified into those with CIS (n=107) and those with papillary only disease (n=50). In general, characteristics were similar between these groups, though BCG-refractory, rather than relapsed disease, was more common in the papillary subgroup. In keeping with an expected bladder cancer population, mean patient age was over 70 years and the vast majority were male. 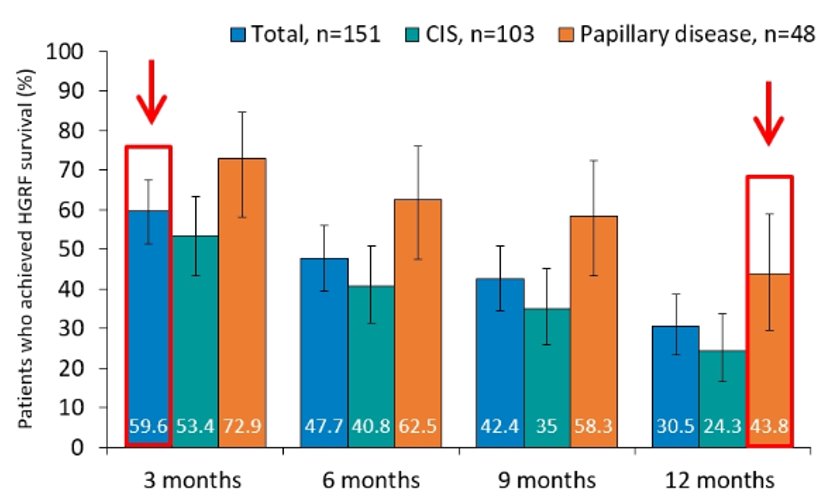 The authors conclude that nadofaregene firadenovec demonstrates clinical response in patients with BCG-unresponsive NMIBC for patients with both CIS and papillary disease. Further, it is well tolerated.