For this study, the authors used the Canadian Kidney Cancer information system to prospectively identify patients from 16 institutions between 2011 and 2017 with RCC. Baseline patient, tumor, and treatment characteristics between Indigenous Canadians and non-Indigenous Canadians were performed using descriptive statistics: 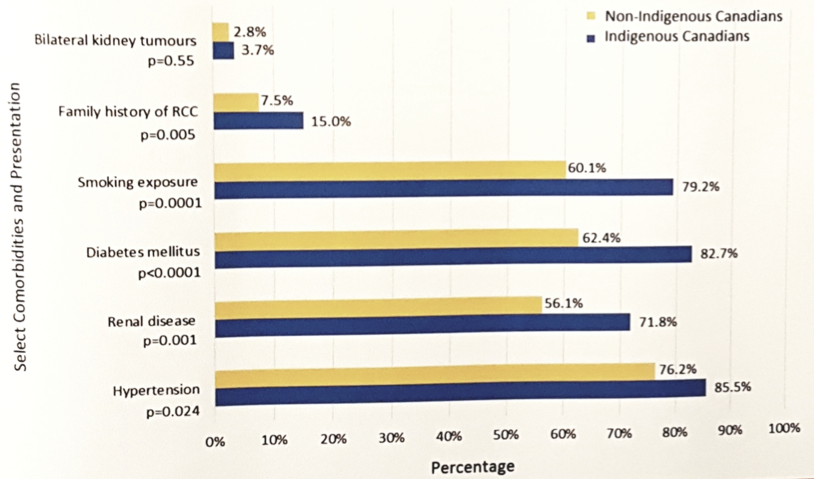 During the study period, there were 5,031 patients with RCC, of which 110 (2.2%) self-identified as Indigenous Canadians. These patients were significantly younger at the time of clinical diagnosis (mean 56.9 vs 61.2 years; p=0.0002) and had a twofold greater prevalence of family history of RCC (15% vs 7.5%; p=0.005). There was no difference in clinical stage at diagnosis between the groups (p=0.98), including those presenting with metastatic disease (10% vs 11%). Indigenous Canadians more commonly had prevalent comorbid conditions that may impact the management of RCC, including higher rates of obesity, hypertension, renal disease, diabetes mellitus, and smoking. Furthermore, Indigenous Canadians received significantly fewer renal tumor biopsies (16.4% vs 28.9%) and a lower rate of active surveillance (4.6% vs 13.1%; both p<0.05). From the time of clinical diagnosis, Indigenous Canadians had a longer median time to biopsy and surgery, however surgical, ablative, and systemic treatment rates were not different between the two groups. Over a median follow-up of >2 years for both groups, interestingly the 5-year overall survival rate was significantly higher among Indigenous Canadians compared to non-Indigenous Canadians: 93.7% vs 83.9% (p=0.025). Time to recurrence and progression between groups was comparable.