(UroToday.com) In this session, Dr. Christopher Evans began the session presenting an index case of a man with a PSA of 5.2, who later underwent a prostate biopsy demonstrating Gleason grade Group 1 cancer only. Later, the patient had an Oncotype test done, showing a GPS score of 21. The patient went on to undergo a multiparametric Magnetic resonance imaging (MRI) and was told that there were no signs of any significant cancer and was consequently put on active surveillance protocol, which he has been on for the last two years. The patient is wondering whether he needs a biopsy every two years, or can he have a biomarker test instead of or perhaps a multiparametric MRI reassuring him that he can forgo the biopsy.

Multiparametric MRI is used for pre-biopsy risk stratification, assessment of biopsy naive patient, evaluation of men with a previous negative prostate biopsy, for staging procedures, for assessment of the need of a confirmatory biopsy, therapeutic planning and for active surveillance monitoring.

When looking at the European Association of urology (EAU) guidelines for active surveillance, prostate-specific antigen (PSA) testing is recommended every six months, and repeat biopsy should be performed if there is evidence of PSA progression, clinical progression on digital rectal examination or radiological progression on multiparametric MRI. During follow-up, if the multiparametric MRI is negative (i.e., PIRADS<=2) and clinical suspicion of prostate cancer progression is low (e.g., low PSA velocity, long PSA doubling time), it is recommended to omit the biopsy-based on shared decision making with the patient.

Dr. Emberton began his talk stating the two big issues in active surveillance. These include the insecure status of the patient and the uncertain transition to a more aggressive disease.

Multiparametric MRI has a role in several timepoints along the active surveillance pathway (Figure 1), according to Dr. Emberton.

As of today, several systematic reviews have shown that risk stratification is enhanced by the use of MRI in a biopsy compared to traditional transrectal ultrasound-guided biopsy.1 The MAPPED study, the Effect of Dutasteride on Magnetic Resonance Imaging Defined Prostate Cancer (MAPPED), was the first randomized trial using a change in prostate MRI as a primary endpoint. In this study, men with low-risk prostate cancer with a visible lesion on MRI greater than 0.2 ccs were enrolled. The intervention included the administration of Dutasteride 0.5 milligrams once daily for six months. The control arm was given a placebo, and the outcome was a 20% change in the volume of MRI T2 lesions. The authors concluded that Dutasteride was associated with a significant reduction in prostate cancer volume on T2-weighted magnetic resonance imaging compared to placebo.2

In a more recent observational study, 672 men with Gleason grade Group One or two were enrolled in an MRI based active surveillance protocol from 2004 to 2017 with a median follow-up of 58 months.3 The results demonstrated an event-free survival (after 5 years) off 83% for Gleason 3 + 3 disease, and 63% for Gleason 3 + 4 disease. 72% of the patients remained on active surveillance after five years, with 24 deaths occurring, of which none were prostate cancer-related. Metastasis had occurred in eight men, and 27 men were upgraded to Gleason grade Group 3 or above.

Dr. Emberton concluded that MRI based active surveillance protocol is well tolerated by patients, and similar to a standard active surveillance protocol. MRI visibility was shown to be the most powerful predictor of transition to active treatment at five years follow-up. MRI visible prostate cancer lesions appeared to have a distinct radiological, pathological, and clinical trajectory. Lastly, the optimal interval for imaging still needs to be determined.

In the next part of this session, Dr. Eric Klein gave an overview of the currently available biomarkers. Biomarkers can be used from serum, urine, or tissue (Figure 2).

The biomarkers that have been tested in active surveillance are shown in Table 1.

It has been shown that histologic grading of prostate adenocarcinoma can be further optimized. For example, cribriform growth is highly predictive for postoperative metastases and disease-specific death in Gleason Score 7 prostate cancer.4 Additionally, a higher Oncotype GPS score has been associated with cribriform histology on biopsy. Oncotype GPS has been shown to predict outcome 20 years after radical prostatectomy.

Patients and clinicians would like to know what the likelihood is of harboring a potentially lethal cancer with a:

Several factors have been associated with grade reclassification at biopsy and pathological grade at radical prostatectomy. These include age, PSA density, PSA trajectory, risk group (low risk vs. very low risk), unilateral vs. bilateral cancer on biopsy, number of biopsies without grade reclassification, and cancer extent on biopsy volume.

In conclusion, Current serum, urine, and tissue-based biomarkers are probably insufficient alone to obviate the need for interval biopsy in men on active surveillance. There are some new markers that hold promise for identifying cribriform disease that has been shown to be associated with long-term outcomes. There is a need for prospective studies that combine these biomarkers together with MRI. One of the possible approaches is using artificial intelligence or machine learning approach to move forward.

In the next part of this session, Dr. William Catalona gave a talk on biomarkers and began describing the ideal substitute for surveillance biopsies in the active surveillance protocol. The ideal substitute would need to have a 100% positive predictive value and negative predictive value. It would add independent predictive information about risk, and it will work for all different subtypes of prostate cancer. It would detect alterations in tumor status overtime and yield reproducible results across institutions and populations. Lastly, it should be convenient and cost-effective.

There are currently many commercially available biomarkers, as can be seen in figure 3.

Dr. Catalona continued and gave the example of the 4K score. Although this biomarker predicted Gleason score upgrades on the initial surveillance biopsy, its utility was diminished on subsequent biopsies, as was seen in the Canary cohor5. This suggests that this biomarker may only be useful in the initial active surveillance protocol.  When assessing the GPS score, the Canary consortium reported that this score did not improve the ability to stratify risk for adverse pathology and showed no association with biopsy upgrade.5 These results are quite inconsistent with previously published data, which showed that each five-point increase in the GPS score was associated with an increased risk of biopsy upgrading with a hazard ratio a 1.286. Additionally, absolute GPS results at the 1st and 2nd biopsies were associated with Gleason upgrading.

Adding to all this, prostate cancer has been shown to exhibit a spectrum of molecular abnormalities in variable clinical courses. Biomarker performance may differ from different prostate cancer subtypes. Biomarkers also may have different operational characteristics among different racial and ethnic groups, for example - ERG fusions in African Americans.

Noncompliance leads to a higher risk of both treatment failure and the development of metastasis.10 Patients who were non-compliant with their confirmatory biopsy had higher rates of recurrence post-treatment (19% VS. 12%) and metastases (7% vs. 2%).

According to Dr. Catalona, surveillance biopsies are more accurate than biomarkers in all important regards. They have higher positive and negative predictive values; they work for all subtypes of prostate cancer and for all ethnic and racial populations. They yield reproducible results across institutions and detect longitudinal alterations in tumor status. Lastly, they provide independent predictive information, which is considerably better than that provided by MRI and all biomarkers.

Currently, genetic testing can supplement the standard parameters that are used for active surveillance, which can provide 85% accuracy. The genetic testing most likely adds an additional 5% more information.

The last part of this session was given by Dr. Samir Taneja, who was opposed to using MRI alone for monitoring men on active surveillance. According to Dr. Taneja, the goals of active surveillance include an accurate selection of low-risk candidates, adherence to well-planned follow-up testing regimen, careful monitoring to identify disease progression, and identification of triggers to allow treatment without delay.

MRI can help in active surveillance by giving better baseline risk stratification and, perhaps, enable fewer biopsies during follow-up. However, it is not a good enough modality to avoid biopsies altogether. This is due to an inadequate negative predictive value, lack of reproducibility, and measure of progression. MRI targeted biopsy in active surveillance improves baseline risk assessment and allows the reduction of biopsies in follow-up due to greater confidence in the results. However, MRI targeted sample alone detects only half of the grade reclassification, and it is often unable to detect small amounts of cancer that are seen in the active surveillance population. There are few quantitative metrics to allow monitoring of change over time. Due to these limitations of MRI, it is insufficient to be used alone in surveillance.

Furthermore, the original Prostate Imaging Reporting and Data System (PIRADS) score was not designed or intended for use in active surveillance patients at all. The MRI technique is currently not standardized among centers around the world. There is considerable Inter-reader variability that remains unacceptably high, even among experts. The longitudinal value of MRI remains poorly defined, and the negative predictive value of MRI in the active surveillance population is inadequate if based only on the PIRADS score. The PIRADS score was formulated on lower prevalence populations. It lacks sufficient measures to allow assessment of change over time, and it is highly subject to MRI acquisition protocol, which changes over time.

It has been shown that the negative predictive value of MRI declines with increasing disease prevalence, as seen in Figure 4. Additionally, the rates of cancer detection on MRI targeted biopsy vary by biopsy indication, as can be seen in Figure 5. 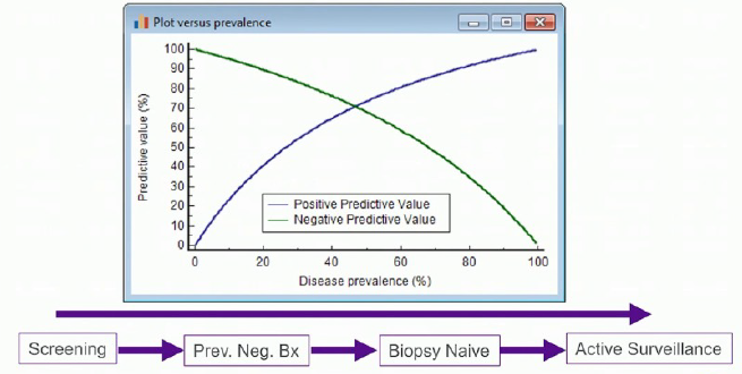 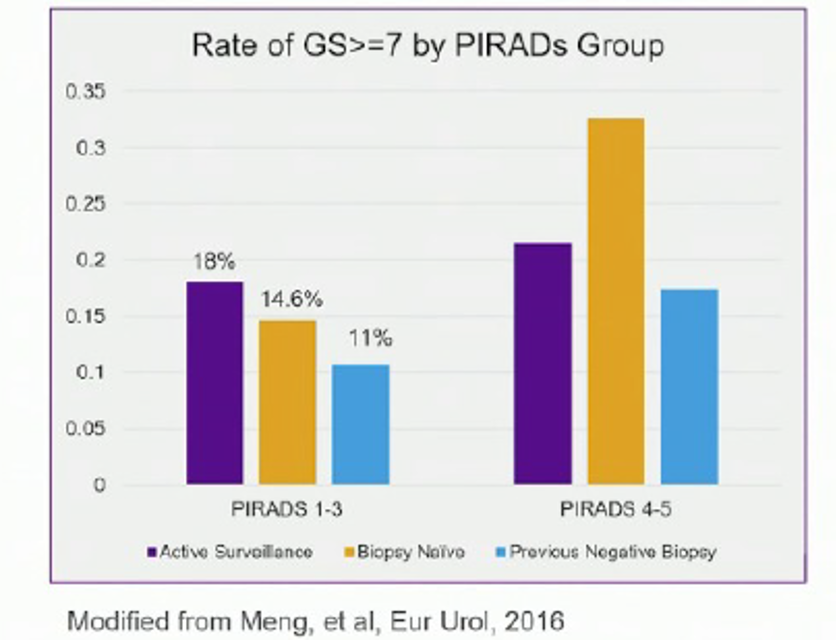 For the MRI to replace the biopsy in active surveillance monitoring, a suspicion scale trained upon a surveillance population would need to be formulated. Considerable improvement in MRI performance and interpretation reproducibility would need to be shown. Additionally, better measures of MRI change over time would need to be seen. We would also need to accept that “missing” progression, typically from Gleason grade 1 to Gleason grade 2, is not generally clinically significant. All these changes may be feasible with time, according to Dr. Taneja, but currently, we are not at that point. Dr. Taneja believes that every active surveillance patient will still require a confirmatory biopsy regardless of his MRI findings.

According to the guidelines, PSA is the only biomarker that is recommended every six months for an active surveillance patient. Other biomarkers may have a role in the selection stratification for active surveillance but have not been properly tested or validated during the monitoring phase. Currently, an opportunity exists for proper randomized clinical trials to define the potential role of available and novel biomarkers.

Multiparametric MRI has a role in the initial evaluation of a patient who is biopsy-naive or has had an initial negative prostate biopsy or is undergoing selection for active surveillance. The current modality of MRI is evolving, especially in its role in active surveillance monitoring, but now, it cannot replace a prostate biopsy. The technique of the MRI and the inter-reader variability are not universally adequate, and negative predictive values are still inadequate. It is currently best considered as a complementary test for assessing disease progression in combination with a prostate biopsy. It can be used to supplement the prostate biopsy in select patients based upon age, the clinical scenario, and patient preference.

Eric Klein, MD, Chairman of the Glickman Urological & Kidney Institute and a staff member in the Taussig Cancer Institute at Cleveland Clinic, Ohio