(UroToday.com) In conjunction with the Scientific Congress held as part of the American Society of Clinical Oncology’s (ASCO) Annual Meeting in May 2020, an Educational Symposium was convened on August 8 to 10th. In a session entitled “Sorting Through the Maze of Treatment Options for Metastatic Castration-Sensitive Prostate Cancer”, Dr. Alicia Morgans from Northwestern University presented a plenary talk discussing the treatment considerations for patients who received combination therapy for metastatic castration sensitive prostate cancer (mCSPC). This followed prior presentations from Dr. Carmel Pezaro and Dr. Neal Shore regarding the role of chemotherapy and novel androgen axis inhibitors in patients with mCSPC.

Dr. Morgans began by highlighting that, as per National Comprehensive Cancer Network (NCCN) guidelines, combination therapy with androgen deprivation therapy and another agent (apalutamide, abiraterone, docetaxel, or enzalutamide) is recommended. 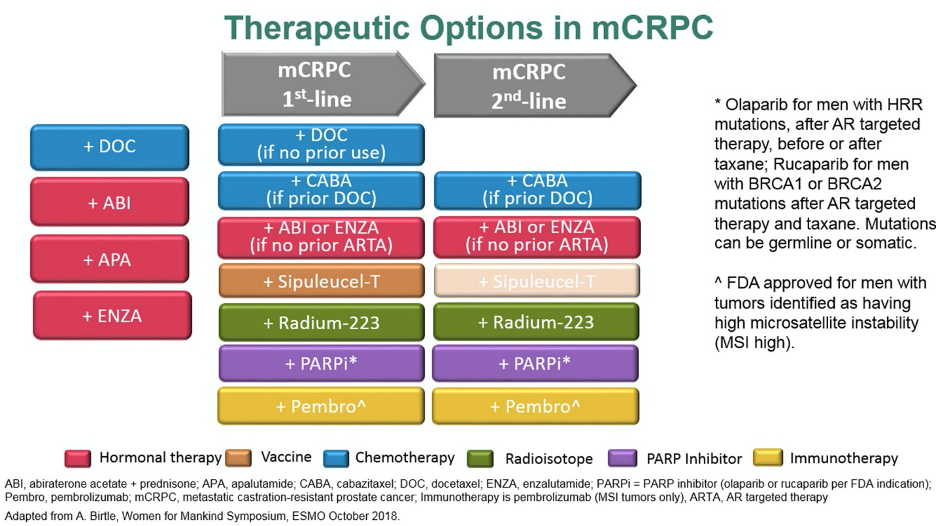 Clearly, prior lines of therapy (including those used in the mCSPC space) influence future treatment choices when the patient progresses to mCRPC. In the mCRPC disease space, treatment choices may be guided by the following factors, among others:

1. prior treatment received, with a preference for novel mechanisms of action
2. treatment availability in practice setting/location
3. presence of visceral metastasis or restriction to bone-only metastasis
4. candidacy for chemotherapy, on the basis of patient comorbidity and frailty
5. histologic characteristics, including the presence of small cell/neuroendocrine differentiation
6. targetable genetic or genomic characteristics including actionable DNA damage repair mutations or presence of microsatellite instability high status
7. availability of clinical trials

Dr. Morgans highlighted that resistance mechanisms can spread through metastasis-to-metastasis seeding and similar resistance patterns are often seen in geographic proximity suggesting an element of interclonal cooperativity. As a result, at the time of disease progression, the use of therapy with a novel treatment mechanism is necessary to counter to acquired resistance.

Apart from these randomized data, there are a number of other studies that have assessed response rates for sequencing of androgen axis targeting agents demonstrates generally short progression-free survival.

Dr. Morgans then highlighted data that may guide specific treatment considerations in particular populations. First, she reviewed data from the PROCEED observational registry of patient’s treated with sipuleucel-T. In a prostate-specific antigen (PSA) matched analysis, median overall survival was significantly longer for African American men (35.3 months) as compared to Caucasian men (25.8 months) (hazard ratio 0.70, 95% confidence interval 0.57 to 0.86). Further, baseline PSA at the time of initiating sipuleucel-T therapy was associated with survival – patients with PSA below the median (29.5 ng/mL) had improved survival (hazard ratio 0.52, 95% confidence interval 0.37 to 0.72).

In an international early access program, observational data suggested that asymptomatic patients receiving radium-223 had significantly improved overall survival compared to those who were symptomatic at the initiation of therapy (hazard ratio 0.49, 95% confidence interval 0.33 to 0.73).

Beyond clinicodemographic factors, Dr. Morgans discussed genetic and genomically targeted approaches. She first examined data from TRITON2 in which patients with mCRPC and deleterious mutations in DNA defect repair (DDR) genes who had progressed on androgen axis targeting agents received rucaparib in a single-arm design. The vast preponderance of patients had a beneficial PSA response. Subsequently, the PROfound study reported a randomized comparison of Olaparib versus physician’s choice among a similar patient population. They demonstrated significantly improved radiographic progression-free survival among those receiving olaparib (median 5.8 months) versus physician’s choice of therapy (median 3.5 months; hazard ratio 0.49, 95% confidence interval 0.38 to 0.63). Great detail regarding the data for PARP inhibitors in prostate cancer is provided in a UroToday Center of Excellence article.

On the basis of these data, rucaparib has been approved for men with BRCA1/2 mutations who have progressed following androgen receptor-targeted therapy and taxane chemotherapy while olaparib has been approved for men with Homologous Recombination Repair (HRR) mutations following androgen receptor-targeted therapy, with or without prior taxane treatment.

Dr. Morgans closed by highlighting the importance of shared decision making for patients with advanced prostate cancer. This is particularly important where there are so many treatment options. Patient preferences may be driven by home or work obligations, by past or vicarious experiences or fears, by insurance restrictions, and other factors. 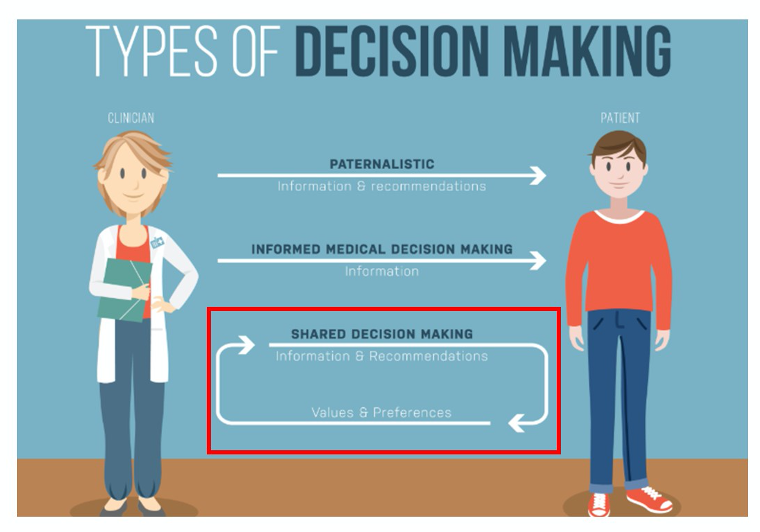 Moving forward, Dr. Morgans highlighted the potential for theranostics, including the therapeutic role of Lutetium-177-prostate-specific membrane antigen (LuPSMA). A number of ongoing trials will assess the role of Lu-PSMA, including in a comparison against cabazitaxel in patients who have progressed following docetaxel and in comparison against best supportive or standard of care in patients who have progressed following both taxane chemotherapy and an androgen axis inhibitor.

Presented by: Alicia Morgans, MD, MPH, Associate Professor of Medicine in the Division of Hematology/Oncology at the Northwestern University Feinberg School of Medicine in Chicago, Illinois