This website uses cookies to ensure you get the best experience on our website. Privacy Policy
(UroToday.com) In conjunction with the Scientific Congress held as part of the American Society of Clinical Oncology’s (ASCO) Annual Meeting in May 2020, an Educational Symposium was convened on August 8 to 10th. In a session entitled “Sorting Through the Maze of Treatment Options for Metastatic Castration-Sensitive Prostate Cancer”, Dr. Shore from the Carolina Urologic Research Center presented a plenary talk discussing the multitude of hormonal treatment options for patients with metastatic castration sensitive prostate cancer (mCSPC).

Dr. Shore highlighted the heterogeneity of patients with mCSPC including those with de novo versus relapsed disease, a spectrum of performance status (from young/health to elderly/frail), and a spectrum of tumor burden (from oligometastatic disease to widespread disease).

Dr. Shore then highlighted the development of novel hormone therapy and chemotherapy in mCSPC beginning with CHAARTED and leading to ARASENS which remains to be reported.

Dr. Shore then highlighted differences in the trial design between the three most recently reported of these trials, TITAN, ARCHES and ENZAMET. As highlighted in the table below, ENZAMET did not allow for prior docetaxel use while the other two did, though utilization was relatively low in these trials (11-18%). In contrast, ENZAMET allowed early concomitant docetaxel which was received by 45% of the study cohort. Further, the duration of therapy was much longer in the ENZAMET trial.

Dr. Shore highlighted that definitions of “high-volume” or “high-risk” disease varied with some studies using 4 or more bone metastasis including at least one outside the pelvis or spinal column or visceral metastases while others used a definition comprising 3 or more bone metastases, visceral metastasis or Gleason score of 8 or greater, respectively.

In TITAN, patients were randomized to apalutamide or placebo in conjunction with androgen deprivation therapy. Similar to LATITUDE, primary analysis of TITAN demonstrated significant improvements in radiographic progression free survival and overall survival (hazard ratio 0.67, p = 0.005), which were qualitatively comparable to those seen in LATITUDE for patients receiving abiraterone acetate and prednisone.

The ARCHES trial assessed the role of enzalutamide in patients with mCSPC. This trial was powered to assess radiographic progression free survival and demonstrated a significant improvement in this metric for patients receiving enzalutamide (hazard ratio 0.39, 95% confidence interval 0.30 to 0.50). However, to date, overall survival data remain immature with only 14.4 months median follow-up and only 84 events. As a result, this trial did not demonstrate a significant improvement in overall survival for those receiving enzalutamide (hazard ratio 0.81, 95% confidence interval 0.53 to 1.25).

However, the ENZAMET trial also examined the role of enzalutamide in this patient population and was powered to assess overall survival as the primary outcome. In contrast to other studies which randomized patients to a placebo control, this trial utilized an active comparator, using first-generation non-steroidal anti-androgens in the control arm. This trial took a fairly pragmatic approach and had varied inclusion including low and high volume disease, de novo and metachronous metastases, and allowed the use of concurrent docetaxel. In analyses stratified by receipt of concurrent volume, receipt of enzalutamide (versus non-steroidal anti-androgen) was associated with improved progression free survival in those who received docetaxel (hazard ratio 0.48, 95% confidence interval 0.37 to 0.62) and those who did not (hazard ratio 0.34, 95% confidence interval 0.26 to 0.44) though overall survival was significantly better with receipt of enzalutamide only among those who did not receive docetaxel (hazard ratio 0.53, 95% confidence interval 0.37 to 0.75).

Dr. Shore then highlighted that all agents being considered for patients with mCSPC are associated with clinically meaningful rates of toxicity, though the specific patterns and issues differ between agents. Issues regarding cardio-oncology and neuro-oncology may affect treatment selection and ongoing management.

It is well known that there is a relationship between androgen deprivation therapy and cardiovascular toxicity. In particular, androgen deprivation therapy may contribute to cardiometabolic changes (including changes in body composition, loss of muscle mass, obesity, diabetes, and dyslipidemia) though the association to overt cardiovascular disease is somewhat less clear.

Dr. Shore then moved to discussing the HERO trial, a phase III trial of oral relugolix, an oral GnRH receptor antagonist, which was presented at the 2020 ASCO Virtual Annual Meeting, in May 2020. Compared to leuprolide therapy, HERO demonstrated that relugolix achieved and sustained castration in a statistically significantly superior manner to leuprolide. Further, relugolix was associated with significantly higher sustained castration rates, early (< day 15) castration and profound castration rates, prostate specific antigen (PSA) response, and also testosterone recovery following the cessation of therapy. Further, the risk of major adverse cardiovascular events was 54% lower among those receiving relugolix as compared to those receiving leuprolide.

Moving from systemic therapy, Dr. Shore then discussed the role of primary tumor therapy in mCSPC. He highlighted data from the STAMPEDE trial which examined the role of radiotherapy to the primary tumor in patients with metastatic disease. Overall, these data found no benefit to the addition to radiotherapy to standard of care systemic therapy, though there was a statistically significant benefit among the subgroup of men with a low burden of metastatic disease.

In the setting of oligometastasis, Dr. Shore highlighted a number of outstanding questions:

The role of metastasis-directed therapy also remains to be resolved. A recent systematic region examined 15 single-armed case series of a total of 450 patients. This review concluded that, although this is a promising approach, this cannot be considered standard of care. Moving forward, there are a number of issues to consider in the treatment of patients with oligometastatic disease: how many lesions should we consider? lesions in which locations should be considered? has the primary tumor already been treated? what imaging has been employed and what is the sensitivity/accuracy of this approach? what is the goal of therapy – to improve survival or delay the need for systemic androgen deprivation therapy? Given this uncertainty, randomized phase III data are needed to better delineate the role for metastasis directed therapy.

In spite of all these promising data, Dr. Shore presented some sobering real world data. In an analysis of patients treated between June 2018 and June 2019 for 1360 patients with mCSPC treated by 156 physicians in the United States, the vast majority were treated with LHRH alone, with a small proportion receiving abiraterone, enzalutamide, apalutamide, or docetaxel. 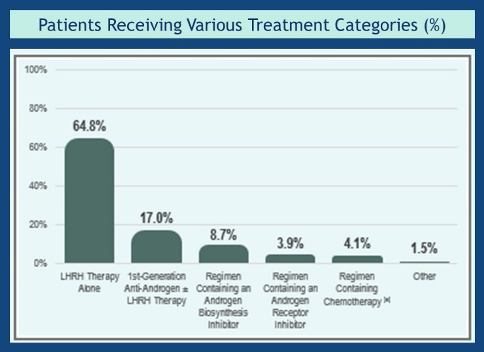 Dr. Shore then highlighted the phase III trials for patients with mCSPC. While 7 trials have already reported (and many of them have been highlighted in this article), a number of ongoing trials remain to be reported. These will delineate the role of apalutamide +/- docetaxel, darolutamide + docetaxel, enzalutamide + pembrolizumab, and abiraterone + capivasertib.

Given the many treatment options available, Dr. Shore then considered a number of factors that are likely to play into treatment decision making for patients with mCSPC including clinical benefit of each treatment (manifest through improvements in overall survival and quality of life), disease specific considerations including the volume and risk of disease as well as specific genomic or genetic alterations, patient specific characteristics including comorbidity, age, and laboratory values, and drug specific factors including toxicity, cost, availability, administration, and duration of treatment course. He presented the following table summarizing much of these data for the agents that are currently available in this disease space.

In conclusion, Dr. Shore highlighted that the standard of care for patients with mCSPC requires consideration for the early addition of docetaxel or an androgen axis targeting agent (such as abiraterone acetate, apalutamide, or enzalutamide) in addition to androgen deprivation therapy. The survival benefit from each of these approaches is similar. Ongoing randomized controlled trials (RCT)s will be necessary to understand the efficacy and safety of combination therapies in this disease space.