(UroToday.com) In conjunction with the Scientific Congress held as part of the American Society of Clinical Oncology’s (ASCO) Annual Meeting in May 2020, an Educational Symposium was convened on August 8 to 10th. In a session entitled “Immune Checkpoint Blockade for Prostate Cancer: Niche Role or Next Breakthrough?”, Dr. Matt Rettig from the University of California Los Angeles’s Jonsson Comprehensive Cancer Center and the West Los Angeles VA Medical Center presented a plenary talk discussing the use of biomarkers to select patients for immune checkpoint blockade with PD-1/PD-L1 inhibitors.

1. Mismatch repair deficiency/microsatellite instability-high. Among patients with advanced prostate cancer (metastatic castration-resistant disease, mCRPC), the incidence is low but variable with reports between 2-12%. Approximately 1% are germline (MSH2 or MSH6) while the remainder are somatic mutations. These biomarkers may be assayed through microsatellite testing or direct evaluation of the mutation and expression status of relevant mismatch repair genes.

There are a number of limitations to this approach including assessment of the number of microsatellite loci, difficulties performing the assay on circulating tumor DNA which thus leads to the requirement for tissue to assay, and the fact that the classic five-marker microsatellite instability panel was developed for patients with colorectal, rather than prostate, cancer.

This is done through targeted sequencing of these genes, including MLH1, MSH2, MSH6, and PMS2, or through immunohistochemical analysis for MMR proteins in tumor tissue. 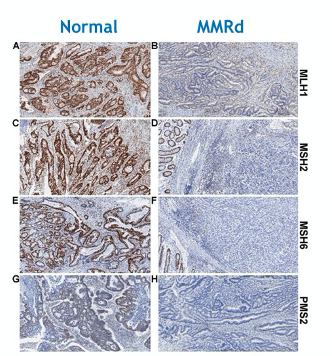 Limitations to this approach include that epigenetic silencing will not be detected in a sequencing-based approach, that sequencing may further fail to detect structural rearrangements, insertion and deletion events, and copy number variations, and limitations in the specificity of immunohistochemical specificity.

Further, regardless of assay approach, Dr. Rettig highlighted that evidence of mismatch repair deficiency (MMRd) or microsatellite instability-high (MSI-H) status does not necessarily correlate to response to pembrolizumab in patients with advanced prostate cancer, as shown in the studies highlighted in the image below in which prostate-specific antigen (PSA) reductions and objective response rates were relatively low in these patients.

2. Tumor mutational burden. This was approved as a biomarker for the use of pembrolizumab in June 2020 by the United States Federal Drug Administration (FDA). Dr. Rettig highlighted data from KEYNOTE-158 which examined pembrolizumab in patients with high tumor mutational burden solid tumors, in a histology agnostic fashion. In this cohort, there had to be at least 10 mutations per megabase, while the median tumor mutational burden in prostate cancer is closer to 2 mutations per megabase. 102 patients were enrolled representing 13% of patients who had tumors tested for TMB status. The objective response rate was 29% with long durations of response (57% exceeding 12 months and 50% exceeding 24 months).

There remain a number of important questions including:

1. the role of immunotherapy in the preponderance of prostate cancers (90-95%) that don’t have MMRd/MSI-H status.
2. why not all patients with MMRd/MSI-H status respond to immune checkpoint blockade?
3. If there are other biomarkers of sensitivity to PD-1/PD-L1 blockade.

Dr. Rettig then highlighted the KEYNOTE-199 trial of pembrolizumab in patients with mCRPC. Among 258 patients, objective response rates were low across all three defined cohorts, though somewhat higher among those with BRCA1/2 or ATM mutations (12%). 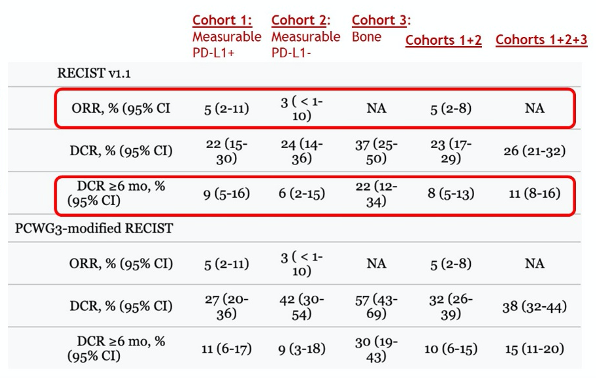 In CheckMate-650, patients with metastatic castration-resistant prostate cancer (mCRPC) and measurable disease received nivolumab and ipilimumab in either the pre-chemo or post-chemo setting. Overall response rates were somewhat higher than in KEYNOTE-199 but still remained below 30%. Severe toxicity was also common.

Moving to the question of alternative biomarkers, Dr. Rettig highlighted CDK12 inactivation. This is again uncommonly found in patients with mCRPC (~7%) but demonstrates some ability to identify those with the response to PD-1 blockade. CHOMP is an ongoing prospective study of pembrolizumab in patients with CDK12 mutated and MMRd mCRPC with blood and tissue correlates.

In conclusion, Dr. Rettig stressed that unselected patients with mCRPC have a very poor response to immune checkpoint blockade using PD-1/PD-L1 targeting agents. While MMRd is the most well-validated biomarker of response, many patients with MMRd will fail to respond and, to date, we do not understand why these patients fail to respond and are unable to identify them prior to therapy. PD-L1 status is not a predictive biomarker for immune checkpoint therapy in this patient population. However, there are a number of other potential biomarkers including HRD, PDK12 inactivation, and others which are currently under evaluation. In his mind, tissue-based correlative analyses of clinical trials are needed to better identify patients who will benefit from immune checkpoint blockade.