(UroToday.com) In this presentation, Dr. Merseburger presented results from the PRESIDE study. PRESIDE is a randomized, double-blind, placebo (PBO)-controlled, phase 3b study of the efficacy and safety of continuing enzalutamide (ENZA) in chemotherapy-naïve, metastatic castration-resistant prostate cancer (mCRPC) patients treated with docetaxel (DOC) plus prednisolone (PDN) who have progressed on ENZA.

ENZA is approved for the treatment of patients with metastatic hormone-sensitive prostate cancer (mHSPC), non-metastatic CRPC, and metastatic CRPC. Clinical data demonstrate that using DOCE following progression on ENZA limits its effectiveness. However, continuing ENZA to target the androgen receptor beyond disease progression may be of clinical benefit. The objective of the PRESIDE study was to compare the efficacy of DOCE plus ENZA versus DOCE plus PBO in chemotherapy-naïve mCRPC patients who had progressed on ENZA. The investigators hypothesized that continued administration of ENZA would maintain control of responding tumor lesions and enable docetaxel to target clonal subpopulations that adopted accessory pathways of survival.

Eligible patients had asymptomatic or minimally symptomatic chemotherapy-naïve mCRPC. The study then implemented a two-stage design. In the first stage, 816 participants were started on open-label ENZA and underwent PSA and imaging at 13 weeks. Patients who progressed at this time were excluded (n=392; 57%). The remaining patients (n=273) continued on ENZA until confirmed disease progression at which time they entered the second stage and were randomized to DOCE plus PBO or ENZA. The primary endpoint was progression-free survival (PFS) with progression defined as radiographic progression, unequivocal clinical progression, or death. 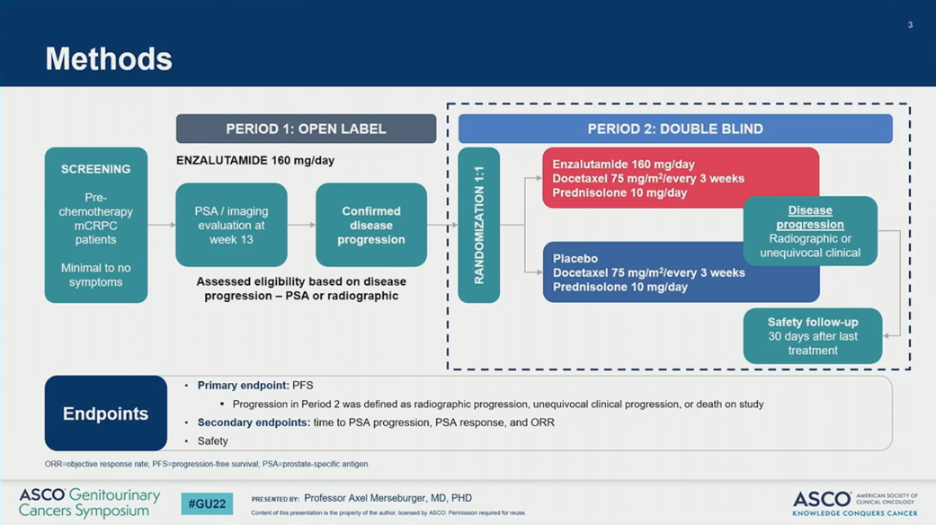 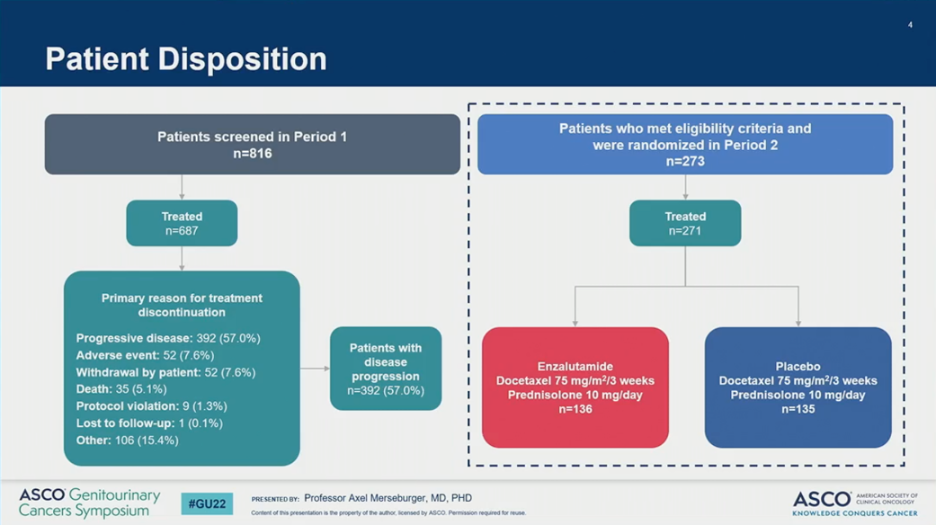 In the analytical cohort, 136 patients were randomized to receive ENZA and 135 to receive PBO. Overall, patient demographics and disease characteristics were similar between the two arms. Notably, median PSA was higher on the ENZA arm than the PBO arm (36.9 versus 28.1). 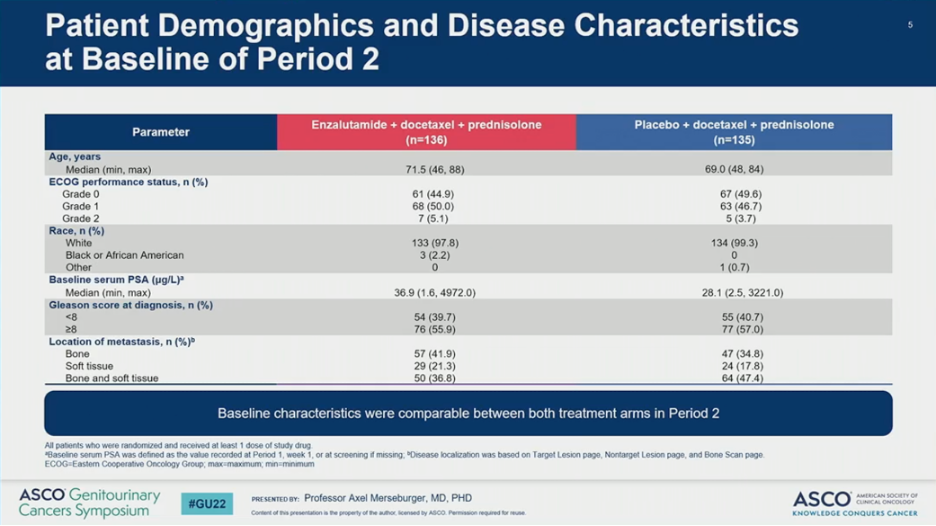 The PRESIDE study met its primary endpoint. The addition of ENZA to DOCE significantly prolonged PFS (HR = 0.72, 955 CI 0.53-0.96; P = 0.027), resulting in a 1.3 month improvement in median PFS. The benefit of ENZA was observed across all subgroups with the greatest benefit in patients with soft tissue or visceral disease. Notably, subgroup analysis was not pre-specified. 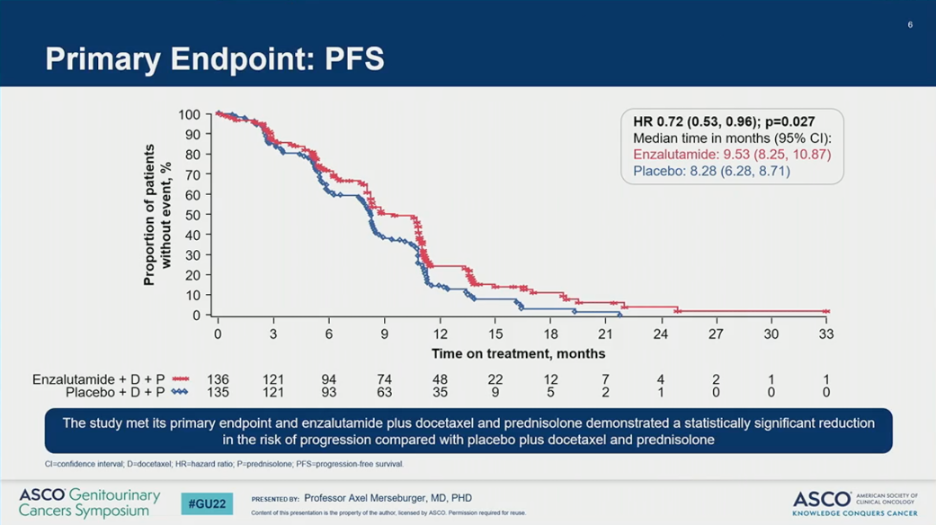 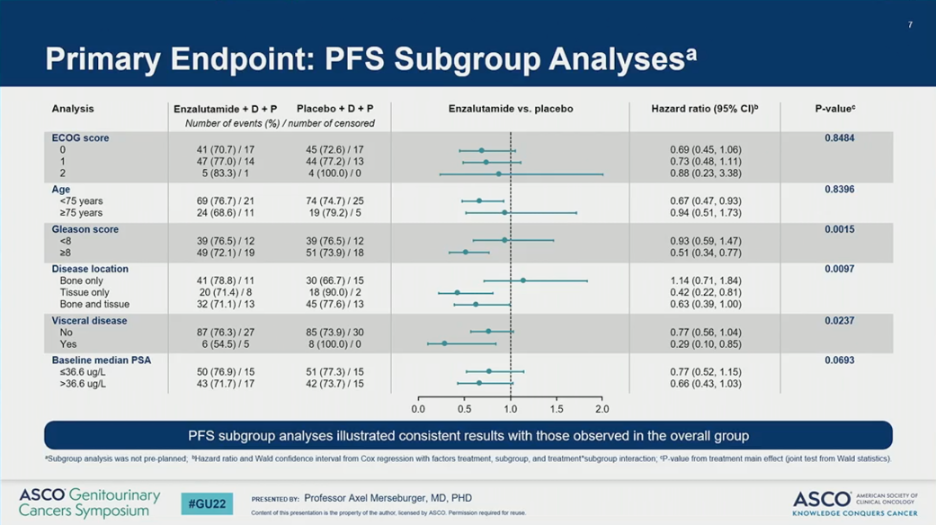 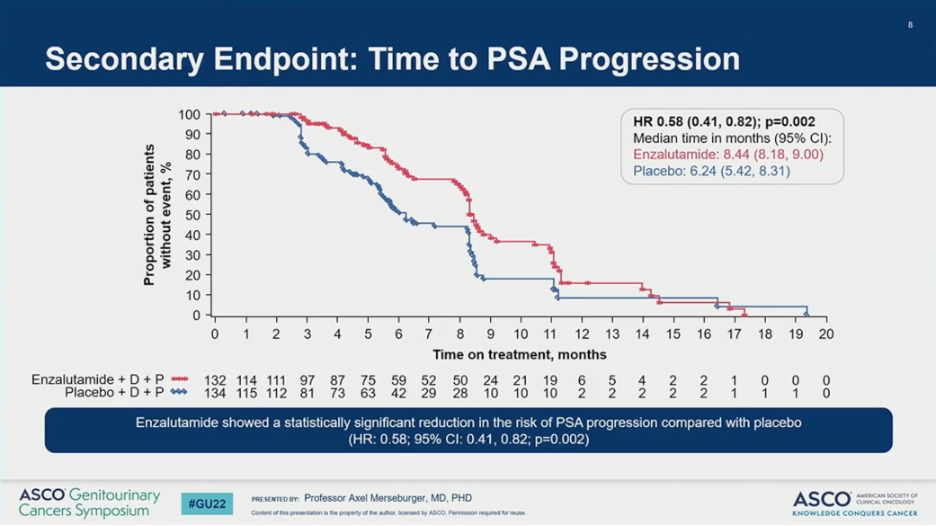 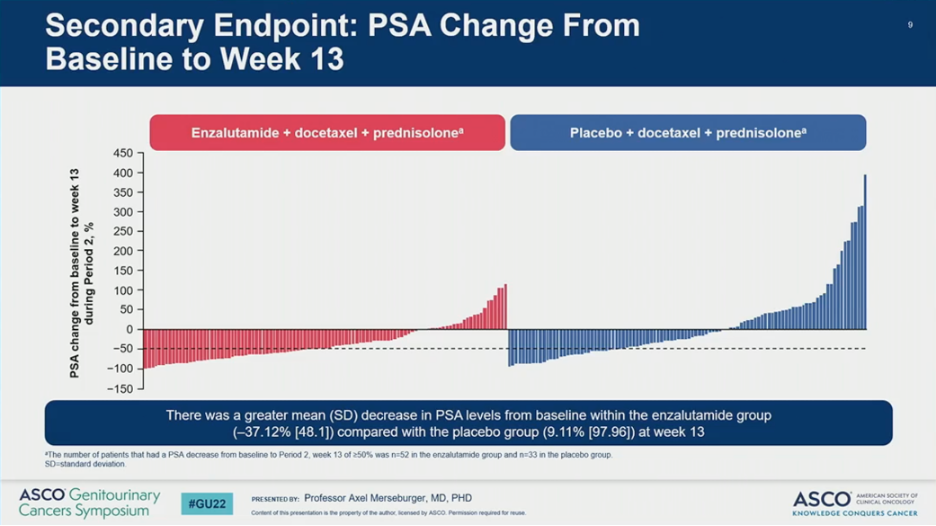 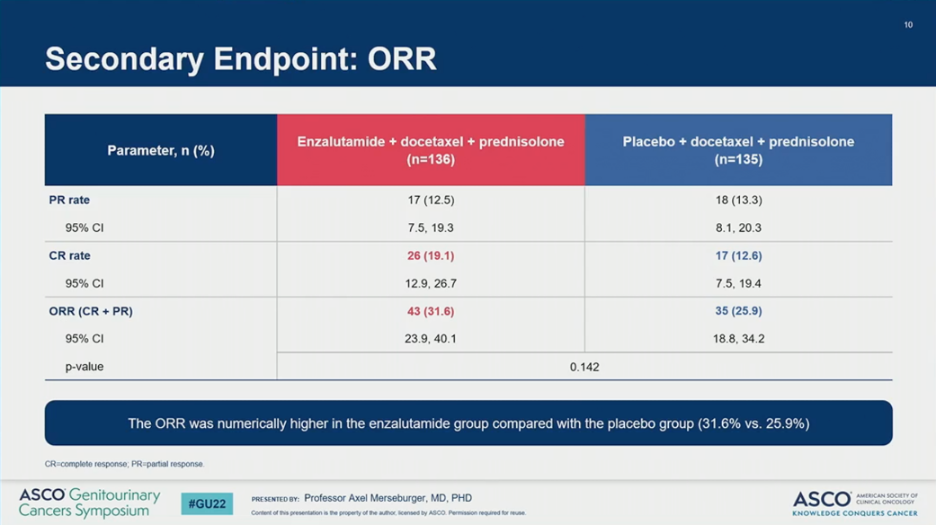 The addition of ENZA to DOCE did result in increased toxicity. While overall treatment-related adverse events (AEs) were similar, serious treatment-related AEs (49% versus 39%) and deaths (9.6% versus 5.2%) were higher in those receiving ENZA than PBO. The median number of cycles of docetaxel received was similar on both arms. 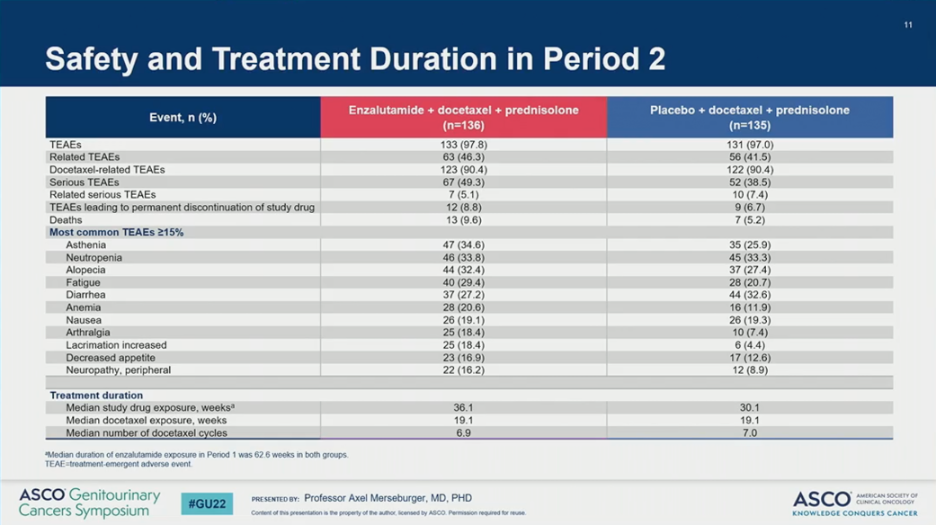 Dr. Merseburger concluded that in patients who had progressed on ENZA, continuing ENZA in combination with DOCE led to a significant improvement in PFS compared with DOCE alone. Secondary endpoints of time to PSA progression and PSA response also favored continuing ENZA. ENZA plus DOCE retained an acceptable safety profile consistent with the known individual safety profiles of these drugs. These data suggest that continued treatment with ENZA plus DOCE offers clinical benefit and could be a future treatment option for some patients with mCRPC who progress on ENZA alone.

Presented by: Axel Merseburger, MD, Ph.D., is Professor of Urology and Chairman of the Clinic of Urology at University Hospital Schleswig-Holstein in Lübeck, Germany