(UroToday.com) The treatment landscape in metastatic hormone-sensitive prostate cancer (mHSPC) has rapidly evolved over the past 5 years, first beginning with data from CHAARTED and STAMPEDE which demonstrated an overall survival benefit to the use of chemotherapy, with docetaxel, in addition to a standard of care backbone of androgen deprivation therapy (ADT). Subsequently, a number of trials demonstrated similar benefits to treatment intensification with novel androgen axis inhibitors including abiraterone acetate (LATITUDE and STAMPEDE), apalutamide (TITAN), and enzalutamide (ENZAMET and ARCHES). Subsequently, in data presented at ASCO and ESMO, the PEACE-1 trial demonstrated that there may be additional benefit from combined triplet treatment intensification with abiraterone acetate, docetaxel, and ADT provided additional benefit beyond docetaxel and ADT.

Darolutamide is a related, but structurally distinct, androgen receptor inhibitor which has demonstrated improved metastasis-free survival and overall survival in patients with nonmetastatic castration-resistant prostate cancer (CRPC). In an oral abstract presentation on the first day of the American Society for Clinical Oncology (ASCO) Genitourinary Cancer Symposium 2022 focusing on prostate cancer, Dr. Smith presented the first results of the ARASENS trial which examined darolutamide in combination with docetaxel and ADT compared to docetaxel and ADT. Results of this trial were concurrently published in the New England Journal of Medicine.1

The ARASENS trial is an international, double-blind, phase 3 study that enrolled patients with mHSPC and ECOG performance status 0 or 1 (NCT02799602). Once accrued, patients were randomized 1:1 to darolutamide 600 mg twice daily or matching placebo in addition to standard of care comprising ADT and docetaxel. This randomization was stratified by extent of disease according to TNM staging (M1a vs M1b vs M1c) and alkaline phosphatase levels ( < vs ≥ upper limit of normal).

The authors assessed the primary endpoint of overall survival in addition to a number of secondary efficacy endpoints such as time to CRPC, time to pain progression, time to first symptomatic skeletal event (SSE), and time to initiation of subsequent systemic antineoplastic therapies and safety.

The authors randomized 1306 patients between Nov 2016 to June 2018, of 651 were allocated to receive darolutamide and 655 to placebo, in combination with ADT and docetaxel. Baseline patient characteristics were in keeping with this disease population, with a median age of 67 years. Most patients (78%) had Gleason score 8 or greater at diagnosis and 85% we diagnosed with de novo metastatic disease. At the time of study screening, the median PSA was 30 ng/mL among those randomized to darolutamide and 24 ng/mL among those randomized to placebo. 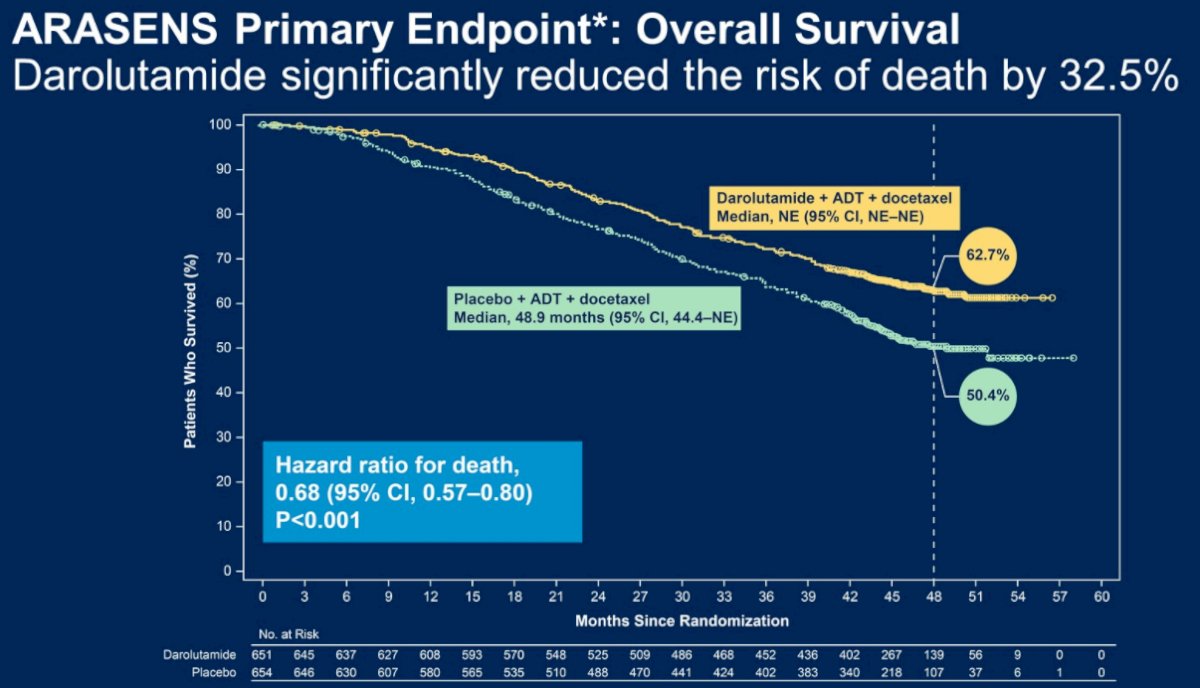 Additionally, this effect was identified across all relevant pre-specified subgroups with a consistent effect.

Assessing patients stratified by metastatic stage at the time of initial prostate cancer diagnosis, the authors found a larger effect among patients who initially presented with localized disease and subsequently progression to metastasis at the time of recurrence.

Further, early use of darolutamide, along with docetaxel, in mCSPC was associated with prolonged time to first SSE and time to initiation of subsequent systemic antineoplastic therapy.

In terms of safety, the authors found similar rates of treatment emergent adverse events (TEAEs), with the incidences of the most common TEAEs (≥10%) were highest during the overlapping docetaxel treatment period for both arms, with grade 3/4 TEAEs of 66.1% for patients randomized to darolutamide and 63.5% for those randomized to placebo, mainly due to neutropenia (33.7% vs 34.2%, respectively).

Further, TEAEs led to treatment discontinuation among 13.5% of patients randomized to darolutamide and 10.6% of patients randomized to placebo. The authors further assessed adverse events of special interest for androgen receptor pathway inhibitors, finding comparable rates of fatigue, fracture, falls, and rash, among others, between the two groups.

Dr. Smith finished by concluding that, among patients with mHSPC, early triplet combination therapy with darolutamide, docetaxel, and ADT significantly increased overall and improved key secondary endpoints compared with ADT and docetaxel alone with similar rates of treatment emergent adverse events between the two arms. Thus, Dr. Smith emphasized that this should become a new standard of care.