Published 13 February 2021
(UroToday.com) Rucaparib is an inhibitor of poly (ADP-ribose) polymerase – PARP – that is approved for the treatment of BRCA1 and BRCA2 mutated metastatic castration-resistant prostate cancer (mCRPC) based on the recently published TRITON2 study. Enzalutamide is an androgen receptor antagonist that is approved for the treatment of mCRPC as well as metastatic castration sensitive prostate cancer (mHSPC). Preclinical studies have demonstrated potential synthetic lethality between androgen receptor signaling inhibition and PARP inhibition, which led to the investigation of these two drugs in combination. As enzalutamide strongly induces CYP3A4, which may contribute to the processing of rucaparib into its oxidative metabolite, the phase 1 RAMP study (NCT04179396) was designed to investigate potential drug-drug interactions and pharmacokinetics in genomically unselected patients as well as safety with the combination of enzalutamide and rucaparib. In this abstract, Arpit Rao presented pharmacokinetic, safety, and preliminary efficacy data for this drug combination in eight patients.

Patients with prostate carcinoma who had previously received 0-2 lines of AR-directed therapy and less than 2 chemotherapeutic agents were eligible for this study. There was a one week run-in period of rucaparib monotherapy, then therapy with 28-day cycles of rucaparib at standard dosing and enzalutamide at standard dosing was begun. The characteristics of the eight patients enrolled in the study are shown below. 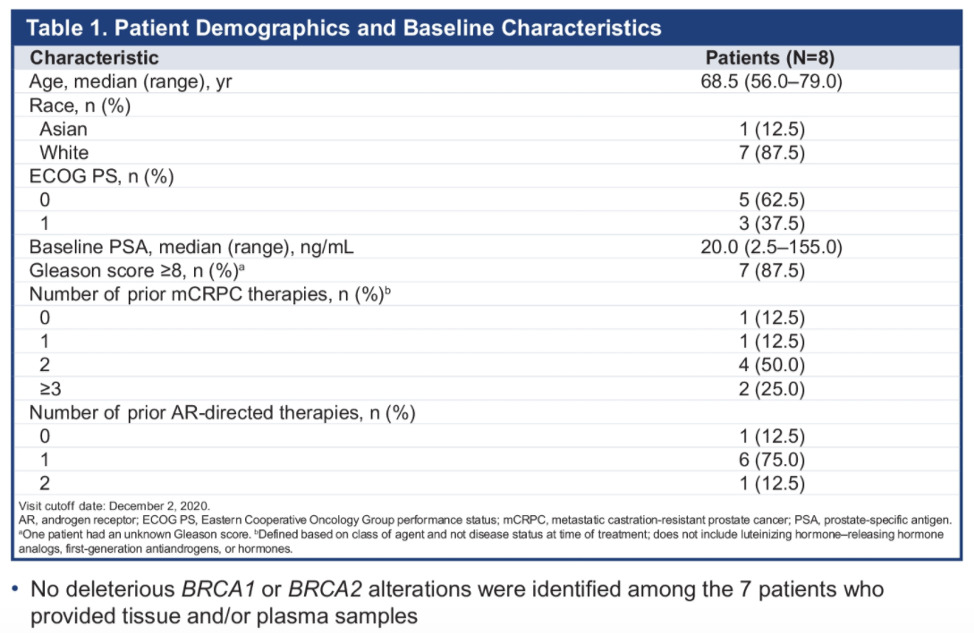 In seven patients who could be evaluated for pharmacokinetics, enzalutamide therapy did not lead to significant decreases in rucaparib concentration, and concentrations of rucaparib were comparable to those seen in the TRITON2 study of rucaparib monotherapy. Enzalutamide concentrations were also within the expected range. Six out of seven patients required dose reductions during the first two cycles due to treatment-emergent adverse events. The most common adverse events were nausea, decreased appetite, and fatigue, and the most common grade 3+ adverse events were anemia and fatigue.

Preliminary efficacy data showed that 6 of 8 patients had a decline in PSA, with 4 patients having a decline in PSA of greater than 50%. Only 1 patient had measurable disease at baseline, and that patient did have a confirmed complete radiographic response. Three patients remained on the study at the time of data cutoff. 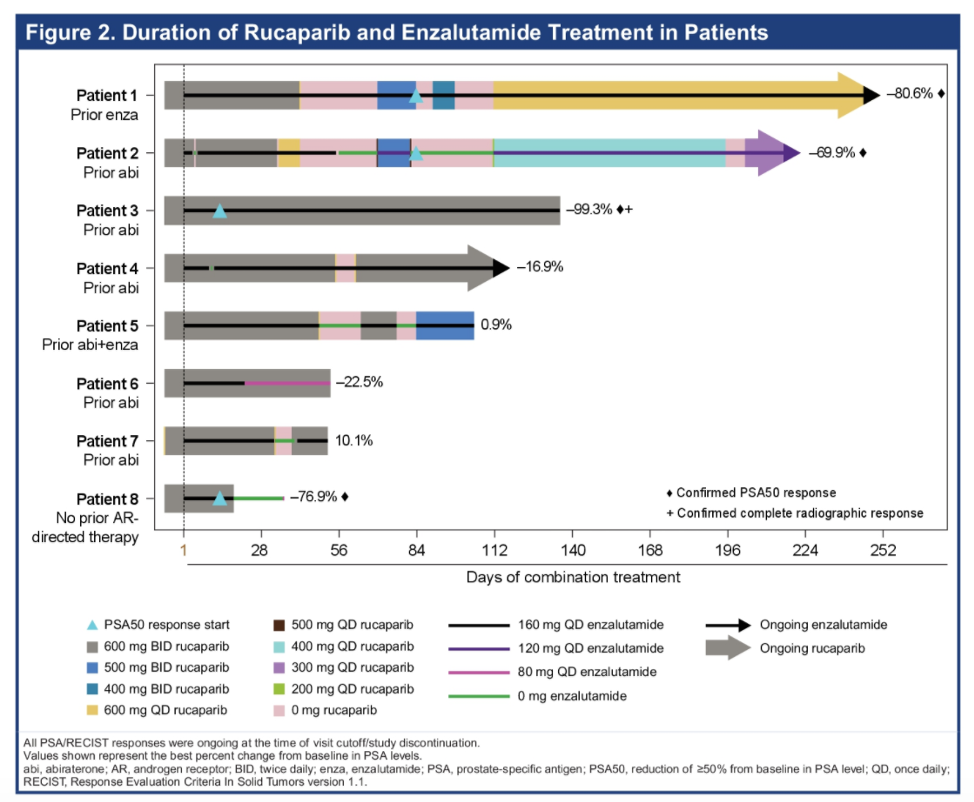 In conclusion, this data from the phase 1 RAMP study showed that combination treatment with rucaparib and enzalutamide had no significant effect on the pharmacokinetic profiles of either drug. The overall safety profile of the combination was consistent with each drug as monotherapy, with no dose-limiting toxicities. There were promising signs of anti-tumor activity that warrant further study. A randomized phase 3 trial is planned of this drug combination (NCT04455750).