(UroToday.com) In this discussion, Dr. Alumkal discussed two presentations looking at molecular correlates of response to apalutamide in non-metastatic castration-resistant prostate cancer (nmCRPC) and data from the ACIS trial of androgen annihilation with abiraterone and apalutamide in chemotherapy naïve mCRPC.

He first discussed the biomarker analysis of SPARTAN. This analysis looked at archival tumor specimens from 233 patients who experienced relative extremes of response to therapy, identifying early progressors (EP) as patients who developed metastatic disease in the first time quartile of the trial duration, and identifying long term responders (LTR) as patients who did not progress or develop metastatic disease in the last quartile of the trial duration. This is illustrated below.

The authors used parallel statistical methods to identify differential gene signature expression between EP and LTR groups as well as signatures associated with response across all patients. Notably, gene signatures of T-cell stimulation and antigen presentation were enriched in LTRs, whereas signatures of tumor angiogenesis and proliferation were downregulated in LTR. In contrast, placebo treated patients who were classified as EP had increased expression of signatures of hormone independence and metastatic capacity.

Dr. Alumkal weighed the results of this study, describing the strengths as (1) this utilized a well-annotated cohort, (2) used two different statistical methods to identify significant signatures, and (3) validated results across the entire cohort. Limitations of the study were that only a small subset of the overall trial population were used as the discovery cohort, there was no discussion of multiple hypothesis testing, and the impact of the results in a multivariable analysis incorporating other potential determinants of response to apalutamide are unknown. Further questions raised by the study include (1) why is the microenvironment of the primary tumor reflective of response at the time of CRPC, (2) can these signatures be validated in independent cohorts, (3) do any of these expression signatures predict overall survival, and (4) what are molecular features of the tumors from patients in the early progressor group.

He then went on to discuss results from the ACIS study, looking at combination of the androgen receptor antagonist apalutamide in combination with abiraterone (androgen annihilation) as compared to abiraterone alone as first line therapy for chemotherapy naïve mCRPC. The schema is shown below.

This study met its primary endpoint of investigator-assessed rPFS at a median of 25.7 months of follow-up. In this updated presentation with median 54.8 months of follow-up, the study continued to show superior rPFS for the combination, with a median rPFS of 24 months for the combination versus 16.6 months for abiraterone alone. This conferred a hazard ratio for radiographic progression or death of 0.70 (95% CI 0.6 – 0.83). However, there was no statistically significant overall survival benefit from the combination therapy (HR for survival 0.95, p = 0.498). Importantly, the overall survival of the abiraterone only cohort was comparable to the initial registration trials for abiraterone in mCRPC, suggesting that this trial was conducted in a similar patient population. Other secondary endpoints such as second progression-free survival were comparable in each study group. A significant proportion of patients in both arms went on to receive docetaxel chemotherapy, and given the overall survival similarity, this could suggest that patients who first got androgen annihilation and then subsequently got docetaxel had lower response rates due to unique biological mechanisms induced by the combination.

Higher rates of toxicity were noted with combination chemotherapy relative to abiraterone alone, as might be expected, but no new safety signals were detected.

Dr. Alumkal then stated that the strength of this study was that it was a large international trial that was blinded and had an appropriate control group. Limitations on the study included the fact that rPFS was investigator-assessed and there was no overall survival benefit with greater toxicity and financial cost.

For additional discussion, Dr. Alumkal then posed a key question, which is how to optimally utilize the available androgen receptor signaling inhibitors (ARSI) available. Multiple studies have looked at this, some of which are summarized in the table below. Staggering abiraterone after enzalutamide seems not be uniquely better than combination abiraterone and enzalutamide. Enzalutamide after abiraterone results in longer 2nd PSA responses as compared to abiraterone after enzalutamide. The CARD trial (DOI: 10.1056/NEJMoa1911206) showed that for patients who progressed on an ARSI in less than 12 months, cabazitaxel subsequent therapy is superior to the alternative ARSI. He summarized that he did not believe results from ACIS were sufficient to change clinical practice at this time. 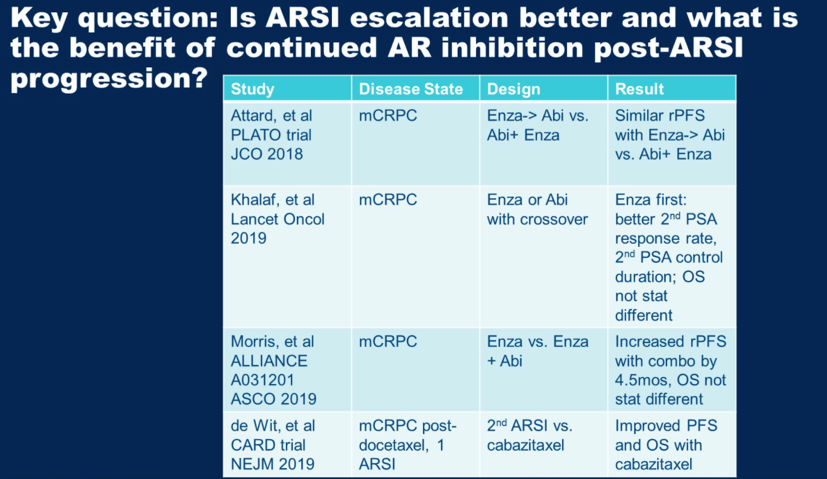 Subsequent studies to identify therapeutic avenues for patients who do not respond to ARSI will require a biological understanding of the active pathways in this context. For example, in a recent study, Dr. Alumkal’s group identified transcriptional programs consistent with stemness and low androgen-receptor activity as being associated with enzalutamide resistance.