(UroToday.com) The SPARTAN clinical trial was a randomized phase 3 placebo-controlled patients evaluating the efficacy of the Androgen Receptor antagonist apalutamide in combination with androgen deprivation therapy (ADT) in patients with nonmetastatic castration resistant prostate cancer (nmCRPC) whose PSA doubling time was less than 12 months. The schema of the study is shown below. Patients were randomized 2:1 to either apalutamide or placebo in combination with ADT. The primary outcome of the study was metastasis free survival (MFS), which is a surrogate for overall survival. Secondary and exploratory outcomes of the study are shown below.

In this presentation, Dr. Feng described the transcriptomic characteristics of the extremes of response in this trial. Time to progression events (metastasis or death) were divided into quartiles, with long term responders defined as no events until the fourth time quartile, and early progressors having events in the first quartile of time. In total, 233 tumors from radical prostatectomy or diagnostic biopsy were included in this biomarker analysis, with a mean time from sample generation to analysis of 6.7 years.

The authors utilized transcriptomic analysis of these baseline tissue samples to apply predefined molecular signatures to analyze pathways enriched at baseline in long term responders to apalutamide plus placebo. They used two statistical methods: (1) a t-test comparing signature enrichment in responders versus early progressors, and (2) a Cox proportional hazards model to relate transcriptomic score to outcome. Signatures associated with long term response by both metrics were nominated as potential pre-treatment biomarkers. 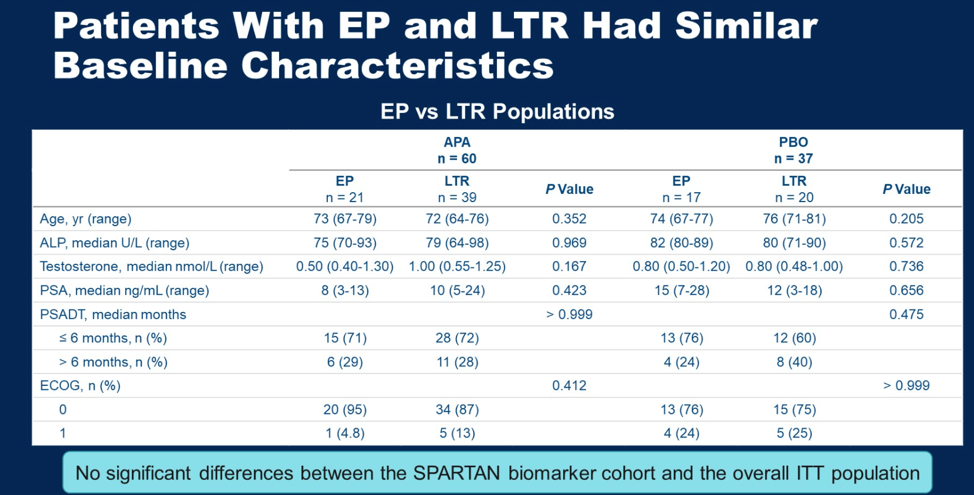 In patients in the apalutamide treatment group, transcriptional signatures of T cell stimulation as well as antigen presentation were enriched in baseline tissue of long-term responders. Long term responders had lower levels of tumor vascularization and proliferative capacity signatures. None of these signatures were associated with long term response in the placebo group. In the placebo group, signatures of increased hormonal independence and metastatic capcity were associated with early progressors.

Molecular signatures associated with long term response that were significant by both methods are shown below, indicated by yellow dots. 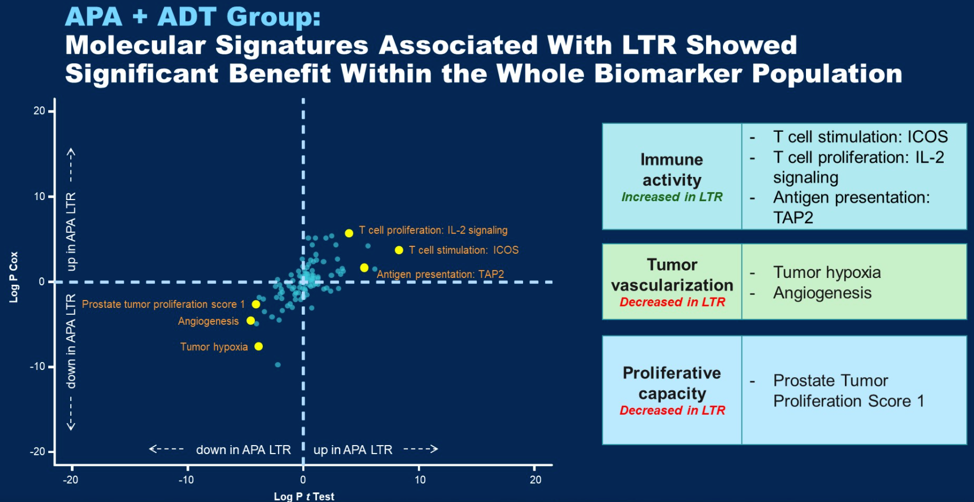 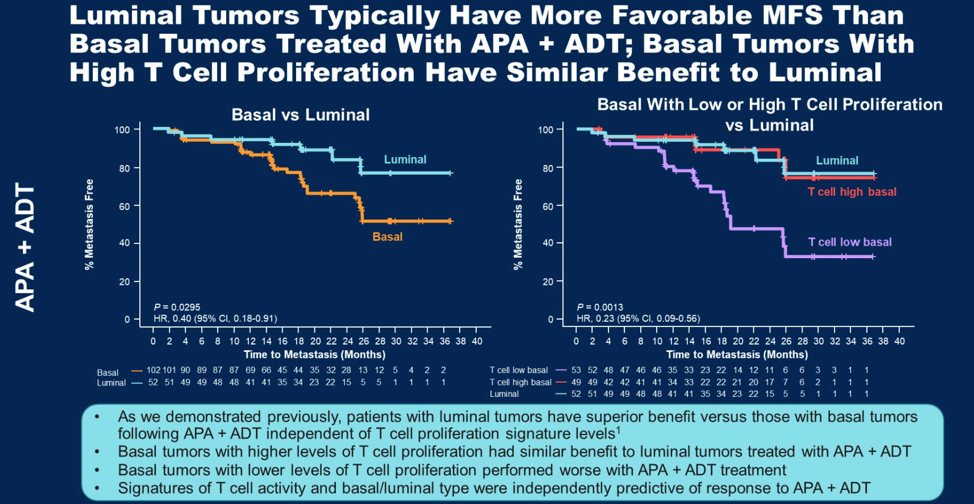 In summary, Dr. Feng concluded that nmCRPC patients with PSADT < 10 months and intrinsic features of increased immune activity, hormonal dependence or lower proliferation at baseline may be more likely to have long-term benefit from apalutamide. Importantly, basal tumors with higher levels of T cell proliferation had similar response rates to luminal tumors.