Published 12 February 2021
(UroToday.com) Stage 1 testicular seminoma, which is defined as pure seminoma confined to the testis with no elevated tumor markers, has an excellent prognosis. Current management has shifted towards surveillance rather than adjuvant radiotherapy or chemotherapy for most patients. Most patients who experience recurrence remain curable with salvage therapies, which typically consist of either radiotherapy or chemotherapy.

Surveillance for recurrence consists of history and physical exam, tumor marker profiling, and intermittent imaging with CT scans. However, the evidence supporting any particular surveillance strategy is quite limited. Furthermore, the many CT scans typically utilized for surveillance may cause unnecessary radiation exposure. To determine if the number of CT scans utilized for surveillance could be decreased or replaced with MRI, the randomized phase 3 trial TRISST was designed.

The phase 3 non-inferiority trial design is shown below. Patients were eligible for enrollment if diagnosed with Stage 1 seminoma and no planned adjuvant therapy. Patients were randomized to either CT or MRI surveillance, and then to either 7 scans or 3 scans on the schedule shown below out to 5 years. The primary outcome was the 6-year incidence of relapse with disease >= 5 cm (Royal Marsden Hospital stage 2C or worse), with tumor size greater than 3 cm as a secondary outcome. The study hypothesized a relapse rate with disease over 5 cm of 5.7% and aimed to exclude an increase to more than 11.4 % recurrence rate with either MRI or fewer scans. 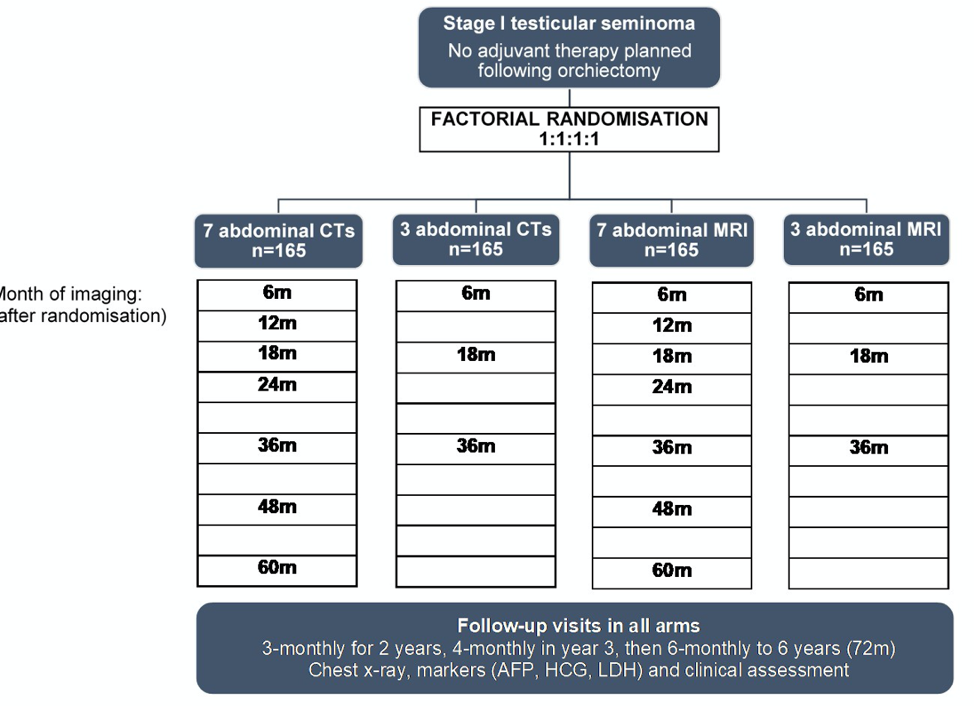 In total, 669 patients were recruited and randomized to the four treatment arms. Patient characteristics in each arm were balanced by age, maximum tumor size, and percentage of tumors greater than 4 cm. Patients were followed for 72 months per study design. Of the patients who completed this surveillance time period, 94% of planned scans were performed, 79% of which were completed within 4 weeks of their planned date.

Regarding the primary outcome of 6-year incidence of stage 2C or greater relapse, the overall incidence of this outcome was lower than expected at 1.5% (10 events, 9 in the 3-scan arm and 1 in the 7 scan arm). This represented an increase of 17% in the proportion of patients who relapsed at this higher stage. Of the 9 relapses in the 3-scan arm, 4 would have had earlier opportunities for relapse detection if they had been in the 7-scan arm. By the planned statistical analysis, these results met criteria for non-inferiority with the 3-scan approach in both the intention to treat and per protocol analysis (upper 90% CI < 5.7%).

With regards to the CT versus MRI comparison, fewer events of relapse at stage 2C or higher were detected with MRI, which statistically was non-inferior to CT scanning.

The outcomes of patients who relapsed are illustrated in the slide below, and is notable for no tumor related deaths and high overall survival.

In summary, the authors conclude that the incidence of relapse rate overall was quite low regardless of imaging modality of frequency, and there were no deaths due to testicular cancer in the cohort. Per the statistical analysis, MRI was non-inferior to CT, and a 3-scan schedule was non-inferior to 7 scans, though the incidence of relapse events was far lower than anticipated when planning the statistical analysis.