Published 14 February 2021
(UroToday.com) Venous tumor thrombus extension occurs in 4-15% cases of renal cell cancer (RCC). The Mayo classification distinguishes four levels of venous tumor thrombus extension between the renal vein and supradiaphragmatic inferior vena cava. Although surgery is performed with curative intent, mortality is high (5-15%) with complications increasing with the level of the venous tumor thrombus. Ultimately, 5-year survival rates are poor in these patients at ~40-65% if they are non-metastatic at the time of surgery. It is hypothesized that neoadjuvant targeted therapy could downstage the venous tumor thrombus reducing the extent of surgery, leading to reduced surgical morbidity and mortality, and increased survival. However, level I or II evidence is lacking. The NAXIVA trial provides the first level II evidence in this patient group, assessing the response of venous tumor thrombus to axitinib. At the Renal Cell Cancer Rapid Abstract Session at the 2021 American Society of Clinical Oncology (ASCO) Genitourinary (GU) Cancers Symposium, Dr. Grant Stewart and colleagues presented results of the NAXIVA Phase II trial.

NAXIVA was a single-arm, single agent, multi-center Phase II feasibility study of axitinib in patients with both metastatic and non-metastatic clear cell RCC prior to nephrectomy and thrombectomy. A Simon two stage minimax design was adopted and the trial designed for adequate power to distinguish a <5% from a >25% improvement in the Mayo venous tumor thrombus level. There were 21 patients recruited over a 24-month period between December 15, 2017, and January 6, 2020, at five sites across the UK. Patients were treated with 8 weeks of axitinib (starting dose 5mg twice daily [BD], increasing to 10mg BD as tolerated) prior to planned surgery. The trial design of NAXIVA is as follows:

The primary endpoint was the percentage of evaluable patients with an improvement in venous tumor thrombus according to the Mayo classification (assessed using MRI abdomen scans at screening and week 9, prior to surgery). Secondary endpoints were percentage change in surgical approach, percentage change in venous tumor thrombus height, response rate (by RECIST), and evaluation of surgical morbidity assessed by Clavien-Dindo classification.

Among the 21 patients enrolled, 15 were male and the median age was 69 years old. There were 11 patients that were M0 and 10 M1 patients. The percentage of evaluable patients with an improvement in venous tumor thrombus according to the Mayo classification was 31.3% (80% confidence interval [CI] 19.6%-44.8%): 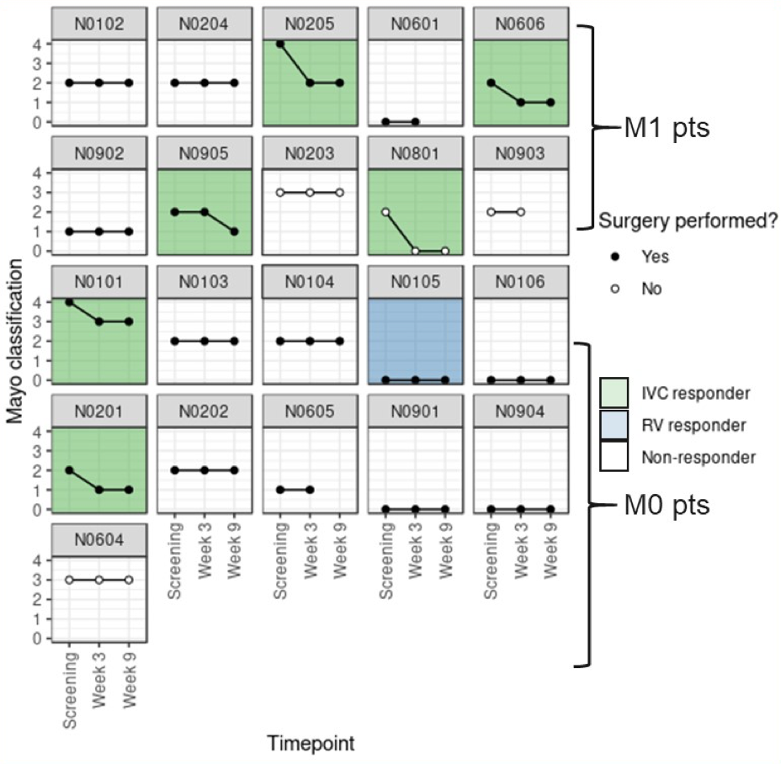 Ultimately, 17 patients proceeded to surgery of which 7 (41.1%) had a change in surgical approach to a less invasive option. There was a median percentage reduction in venous tumor thrombus height observed in 5 out of 17 patients (29.4%), and no patients had deterioration in “level of control” of the inferior vena cava (IVC)/renal vein. In terms of surgical morbidity, 11.7% (2 of 17 patients who progressed to surgery) experienced a Clavien-Dindo 3 or greater complication (one CVA intraoperatively and the patient died – grade V, one cardiorespiratory arrest – grade IVa). The median dose of axitinib was 5.8 mg (range 3.1-8.0 mg), with a median duration of therapy of 54 days (range: 16-57 days). The most common grade 3-5 adverse events were hypertension (24%), and fatigue (10%).

Dr. Stewart concluded his presentation of the NAXIVA trial with the following statements: