(UroToday.com) The treatment landscape for first-line therapy among patients with metastatic renal cell carcinoma (mRCC) has changed dramatically over the past 2 years. In 2018, publication of the CheckMate214 data demonstrated a survival benefit for patients treated with nivolumab and ipilimumab compared with sunitinib in intermediate and poor-risk mRCC, ushering in the immunotherapy era for mRCC. The subsequent publication of the JAVELIN Renal 101, KEYNOTE-426, and CheckMate-9ER studies demonstrated the superiority of avelumab and axitinib, pembrolizumab, and axitinib, and nivolumab and cabozantinib compared to sunitinib in this disease space. However, the role of immune checkpoint + VEGFR inhibition in elderly patients remains unclear. In a plenary abstract presentation in the Poster Highlights Session: Renal Cell Cancer - Clinical Trial Updates session at the 2021 ASCO GU Cancers Symposium, Dr. Yoshihiko Tomita and colleagues provide an update of the JAVELIN Renal 101 trial with a focus on efficacy and safety outcomes stratified by age.

The methodology of the JAVELIN Renal 101 trial has been reported previously. To summarize, patients with advanced renal cell carcinoma were randomized in a 1:1 fashion to receive avelumab 10 mg/kg intravenously every 2 weeks + axitinib 5 mg orally twice daily or sunitinib 50 mg orally once daily for 4 weeks (6-week cycles). The authors assessed progression-free survival (PFS) and objective response rates (ORR) per independent central review (RECIST 1.1), overall survival (OS), and safety by age group (<65, ≥65 to <75, and ≥75 years).

As of the data cut-off of January 2019 for the second interim analysis, the median follow-up was approximately 19 months in the avelumab + axitinib arm and 16 months in the sunitinib arm.

Stratified by age group, the relative benefit of avelumab + axitinib compared to sunitinib was relatively consistent. This was observed most convincingly for assessment of ORR and progression-free survival and follow-up for overall survival remained somewhat immature. 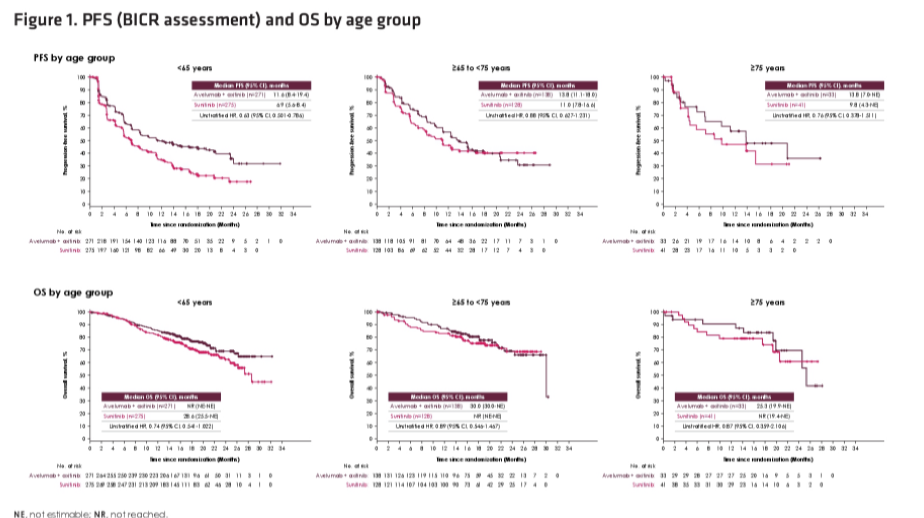 Treatment-emergent adverse events were relatively common between the age groups, without new signals.

Thus, the authors conclude that avelumab + axitinib demonstrated favourable efficacy across all age groups, including among those over the age of 75 years.