San Francisco, California (UroToday.com) Dr. Alicia Morgans, Associate Professor and Medical Oncologist at Northwestern University Feinberg School of Medicine, presented some of the most influential articles from the past year in the field of prostate cancer research from a medical oncology perspective.

The first study she discussed was the ENZAMET Trial, an international phase 3 study that randomized men with metastatic hormone-sensitive prostate cancer (mHSPC) to androgen deprivation therapy (ADT) plus a non-steroidal anti-androgen (NSAA) versus ADT plus enzalutamide.1 The control arm in this study is notable as it is the most active control arm studied in this disease setting to date; most experimental arms compare to ADT plus placebo. This is notable as it makes it harder for the experimental arm to achieve the primary endpoint of prolonging overall survival. Also of note is that patients were stratified by planned prior docetaxel use (~45% in both study arms) and volume (high versus low by CHAARTED criteria). 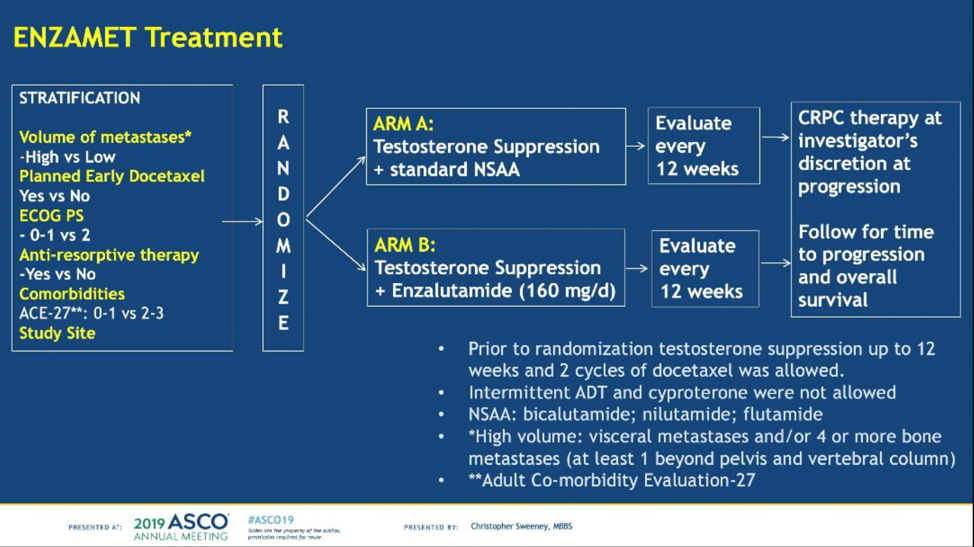 ENZAMET met its primary outcome of improved overall survival with a 33% reduction in mortality for patients treated with enzalutamide. Pre-specified subgroup analyses by whether or not patients received of docetaxel found that the benefit of early enzalutamide was seen only in patients who did not receive docetaxel (hazard ratio [HR] = 0.53, 95% confidence interval [CI] = 0.37-0.85) and not in those who did receive early docetaxel (HR= 0.90; 95% CI = 0.62-1.31). This suggests that at this time there is no benefit to triple therapy (ADT plus docetaxel plus enzalutamide) in the newly diagnosed mHSPC setting, but the overall survival data is immature. Further evidence against triple therapy at this time is increased toxicity, especially sensory neuropathy, nail discoloration, watery eyes, and fatigue in these patients compared to other arms. Outstanding results from ENZAMET include the quality of life and patient-reported outcome data, health economic analysis, translational biological studies, and of course, the long-term overall survival data.

TITAN was another phase III study in mHSPC that randomized men to ADT plus placebo versus ADT plus apalutamide with the dual primary endpoints of radiographic progression-free survival (rPFS) and overall survival.2 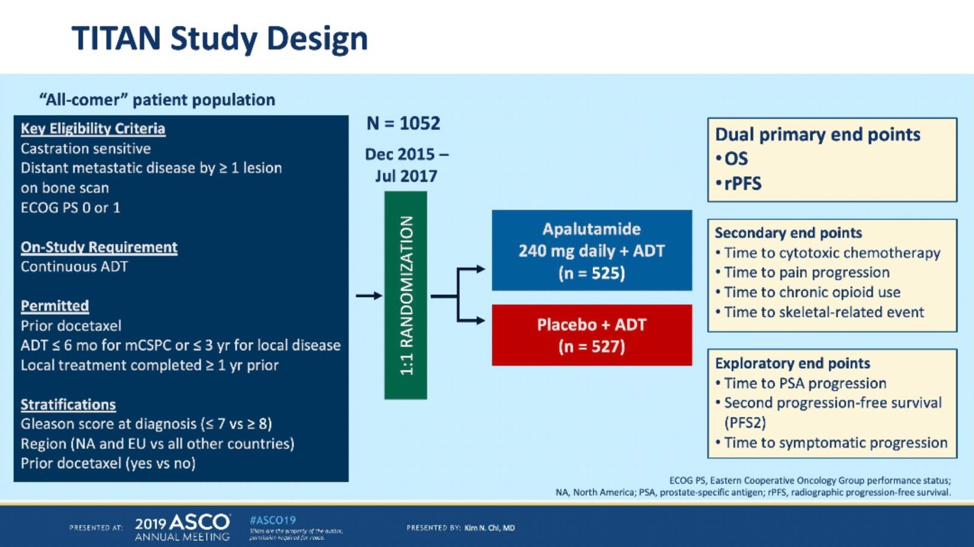 TITAN also met its primary overall survival endpoint with a similar 33% reduction in mortality. Of note, quality of life data was published in the initial TITAN manuscript, which show that quality of life is preserved with the addition of apalutamide to ADT. As a result of ENZAMET and TITAN, there are now four category 1 options for systemic treatment (in addition to ADT) in newly diagnosed mHSPC: docetaxel, abiraterone with prednisone, apalutamide, and enzalutamide.

Dr. Morgans then discussed a re-analysis of the docetaxel arm of the STAMPEDE Trial by disease volume.3 This retrospectively reviewed scans for metastatic patients and analyzed patients by high versus low volume status per the CHAARTED definition.4 830 men were included in the analysis, which found that overall survival was significantly improved in both the high (HR = 0.81) and low (HR = 0.76) volume subsets. Test of interaction by metastatic burden was not significant, supporting no difference in the impact of docetaxel on survival by volume. Dr. Morgans suggested that differences in the proportion of patients in CHAARTED versus STAMPEDE could account for the difference in observed outcomes. The ongoing PEACE-1 and SWOG 180s trials are evaluating the role of treating the primary prostate in addition to systemic therapy in mHSPC.

Dr. Morgans next discussed two III studies in the metastatic castration-resistant prostate cancer (mCRPC) setting. TOPARP-B randomized men with mCRPC with DNA damage repair (DDR) alterations to olaparib 300 mg or 400 mg with the primary endpoint of composite response rage, which included RECIST, greater than 50% decline in PSA (PSA50), and circulating tumor cell (CTC) conversion.5 Notably, 711 patients consented, but only 98 (14%) were randomized. There was significant dropout due to inadequate tissue for genetic testing, poor quality tissue sample, and not having DDR alterations. Responses were seen at both doses, but only 400 mg met criteria for confirmed composite overall response. Response rates differed by gene alteration with highest rates seen in BRCA1, BRCA2, and PALB2, with few ATM and CDK12 patients responding.

The CARD Study randomized men with mCRPC who progressed in less than 12 months on prior abiraterone or enzalutamide to the other AR targeted therapy they had not yet received or cabazitaxel chemotherapy. The primary endpoint was rPFS. Prior docetaxel was allowed.6 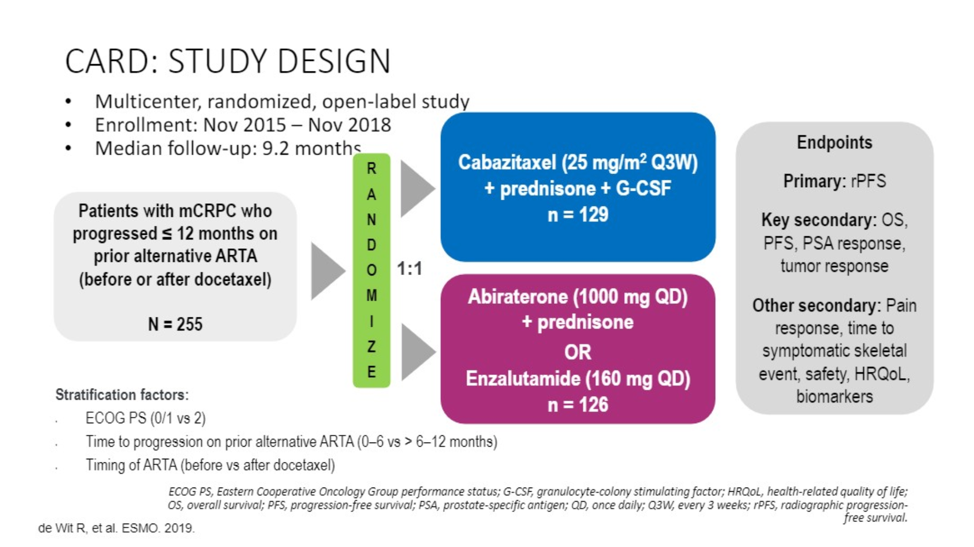 Cabazitaxel was associated with a 36% reduction in rPFS. Dr. Morgans highlighted that only 14% of patients in this study achieved PSA50 to second AR targeted therapy with a median PFS of 2.7 months. Quality of life data from the CARD study will be presented separately at the GU ASCO 2020 meeting.