San Francisco, CA (urotoday.com) During the afternoon prostate session of GU ASCO 2020, Dr. Agarwal presented on the time to secondary progression in patients on TITAN. The TITAN trial is a phase III randomized double blind study, which evaluated the effect of apalutamide in patients with metastatic castrate sensitive prostate cancer receiving androgen deprivation therapy.  The results of this trial were initially presented last year at ASCO and subsequently published the New England Journal of Medicine, with trial demonstrating a significant improvement in radiographic progression-free survival and overall survival in those that had received apalutamide as opposed to placebo.1

Of the 277 participants in the TITAN trial that received subsequent therapy, 87 had been randomized to the apalutamide arm. Of these patients, 24 received additional hormonal therapy, abiraterone+prednisone or enzalutamide and 30 received a subsequent taxane, either docetaxel or cabazitaxel. Baseline demographics and disease characters were generally similar between the groups, although the taxane group had a higher proportion of patients with higher volume of metastases and patients with >10 bone metastases. Additionally, the taxane group was less likely to have received prior docetaxel treatment as compared to the hormonal group. 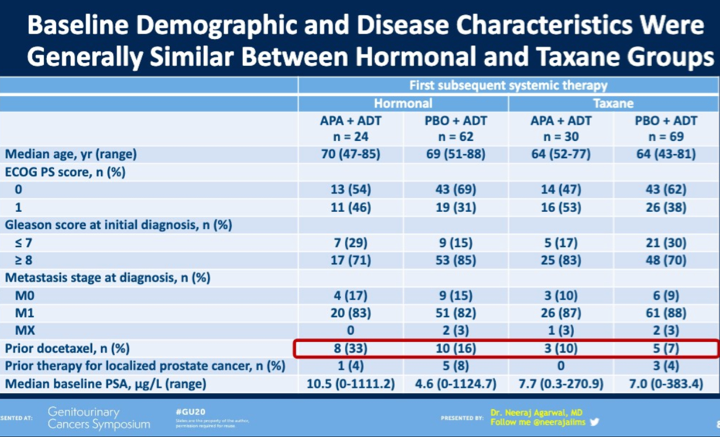 Overall, the authors found that regardless of subsequent therapy, patients that had received apalutamide continued to demonstrate a significant reduction in risk of secondary progression compared to those who had received the placebo. In the hormonal group, the hazard ratio was 0.68 (0.48-0.97) and in the taxane group, the reduction was similar with a hazard ratio of 0.67 (0.48-0.94). The median treatment duration had not been reached by the completion of this analysis. All patients, however, had discontinued therapy mostly due to disease progression. 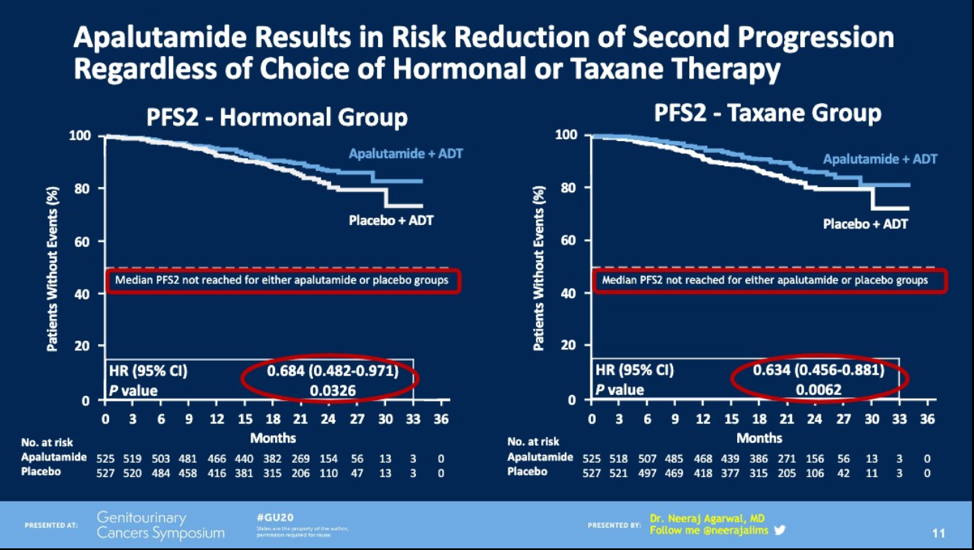 The authors concluded that the benefits of upfront apalutamide continues through the next line of therapy. While these results are promising, it is important to note that they are based on a small number of non-randomized patients and that secondary treatment selection was at the discretion of the treating physician. Further maturation of this data is needed for additional in-depth analysis.