San Francisco, CA (UroToday.com) Advanced seminoma is a disease that primarily affects young men and fortunately has an excellent prognosis relative to other metastatic solid tumors. Given 5-year overall survival rates of 95% (based on recently updated IGCCCG data presented in Abstract 386), it is likely that many patients with good risk metastatic seminoma are over-treated with the standard of care chemotherapy of BEP x 3 or EP x 4. It is known that FDG-PET imaging is effective in seminoma, with a high negative predictive value (90%) for predicting the presence of viable tumor cells. This has led to guidelines advocating the use of FDG-PET in evaluating residual masses after chemotherapy that are > 3 cm in diameter.

Based on the efficacy of FDG-PET in seminoma, the authors of the SEMITEP (NCT01887340) study hypothesized that PET scans could be used to de-escalate therapy in good-risk seminoma. They therefore set up the study shown below. EP x 4 was chosen as the standard therapy because the authors felt this regimen has the largest reported experience at the time of study design. Carboplatin at AUC of 7 was chosen for the de-escalation arm given its known anti-tumor activity in low-volume seminoma. There are no validated metabolic response criteria for FDG-PET in seminoma, so the authors defined FDG-PET positivity by the presence of abnormal focal uptake regardless of corresponding CT correlate as called by a local nuclear medicine physician. Currently, a physician blinded to the study is performing a second analysis of images from the study. 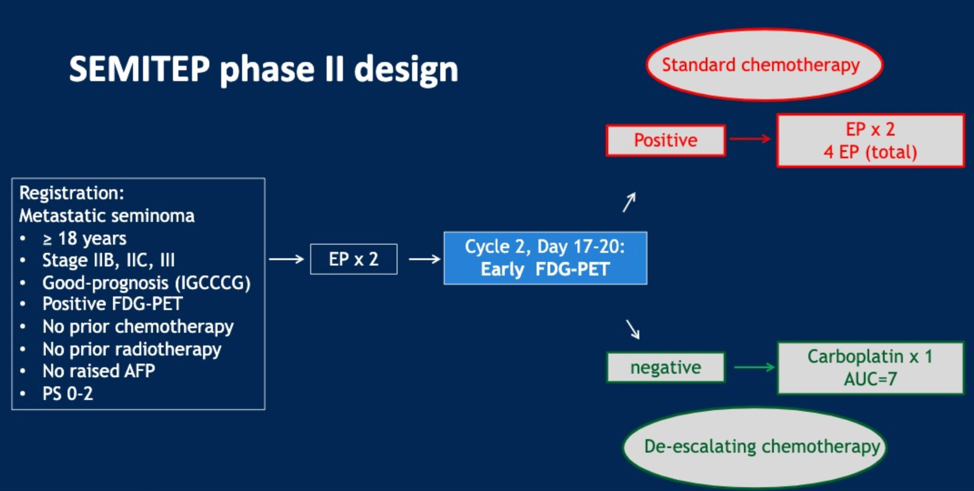 Based on power calculations, 102 patients were enrolled over four years from 16 centres in France. Patient characteristics are shown below. The majority of patients were stage IIB, with only 13% of patients having Stage III disease. 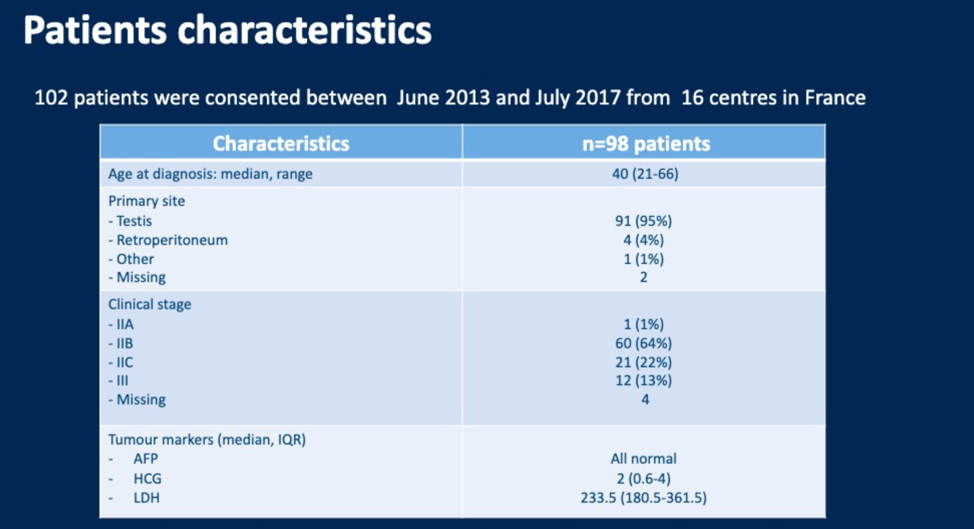 The study flowchart is shown below. Notably, 68.4% of patients received de-escalating chemotherapy.

At a median of 34 months of follow-up, there were no differences in progression free survival between patients who received four cycles of EP or two cycles of EP + 1 cycle of carboplatin.

In summary, 72% of patients enrolled on SEMITEP had a negative early FDG-PET. De-escalating therapy based on this finding appears to be safe and feasible at least at three years of follow-up. While toxicities were essentially similar, there was a decreased amount of neuropathy in the de-escalation group, and all patients were able to avoid bleomycin induced toxicity. Longer term follow-up will be required to understand if PET-based de-escalation of therapy has an impact on patient survival.