San Francisco, California (UroToday.com) The International Germ Cell Cancer Collaborative Group (IGCCCG) published its prognostic risk stratification system in 1997, classifying germ cell tumors into good, intermediate, or poor risk based on histology, organ involvement, and serum tumor markers. The classification of seminoma included only good or intermediate-risk categories, with the presence of non-pulmonary visceral metastases being the sole discriminating factor between the two. At ESMO 2019, the IGCCCG presented the results of an academic effort to update survival rates in non-seminomatous tumors as well as identify new prognostic factors to better explain heterogeneity in the clinical course. In this presentation, the IGCCCG presented the results of a similar analysis for advanced seminomas.

To update the risk classification scheme, the authors assembled a cohort of 2,451 patients with seminoma treated at various centers across the world. Almost the entire cohort was used to update the progression-free survival (PFS) and overall survival (OS) associated with each risk group. A total of 1182 patients had complete data on all necessary covariates, and these patients were used to refine the original IGCCCG risk classification. Patients were included in the effort if they received cisplatin and etoposide-based first-line treatments between 1990 and 2013. Patients who relapsed after initial stage 1 disease, patients with extragonadal primaries, and those from trials, as well as patient registries, were all allowed. Patients who were female, or had received prior chemotherapy, or had primary central nervous system tumors were excluded. The therapeutic regimens received by the patients are as follows: 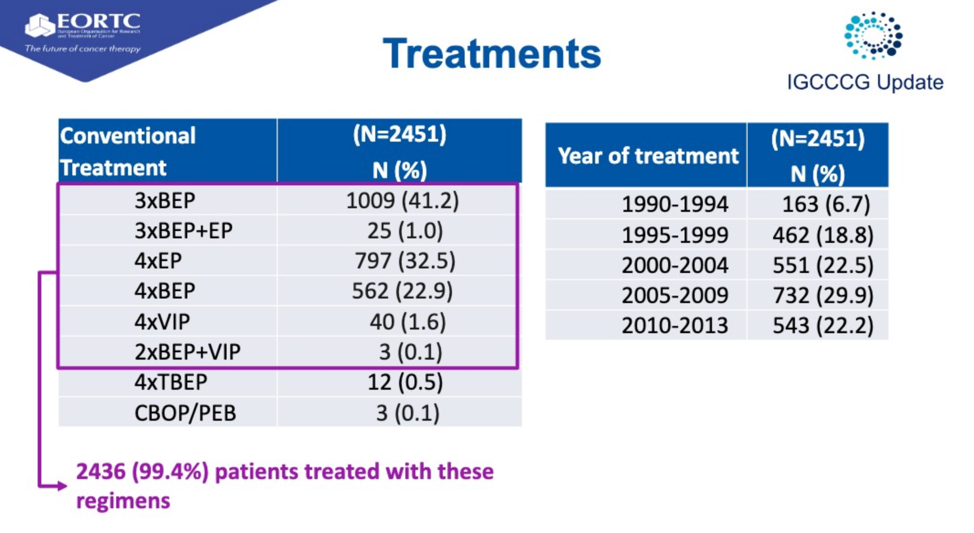 The updated PFS and OS characteristics are shown in the table below:

As with non-seminoma, both PFS and OS have improved. As discussed in prior sessions, this is likely due to the optimized use of available therapeutic agents, better supportive care, and better use of improved surgical technique.

The authors then used the ~1100 patient cohort to identify new prognostic factors using conditional forest methods. The characteristics of this cohort are shown below. 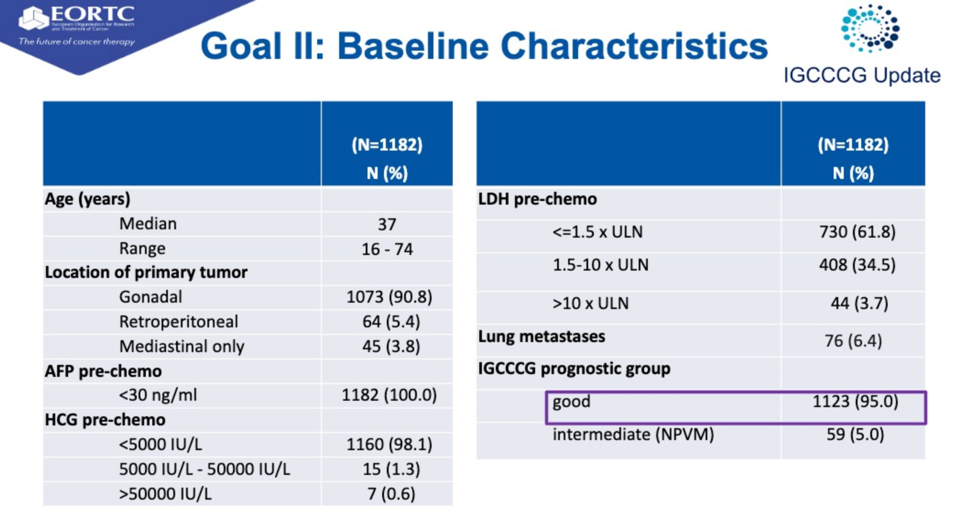 Elevation in lactate dehydrogenase (LDH) was the most significant prognostic factor in this new analysis. After weighing different thresholds, 2.5 x the upper limit of normal of LDH was chosen as a threshold to distinguish between good-risk patients. Indeed, patients with advanced seminoma classified as good-risk by the 1997 criteria but who had LDH levels 2.5 times the upper limit of normal were confirmed to have progression-free survival similar to intermediate-risk patients. 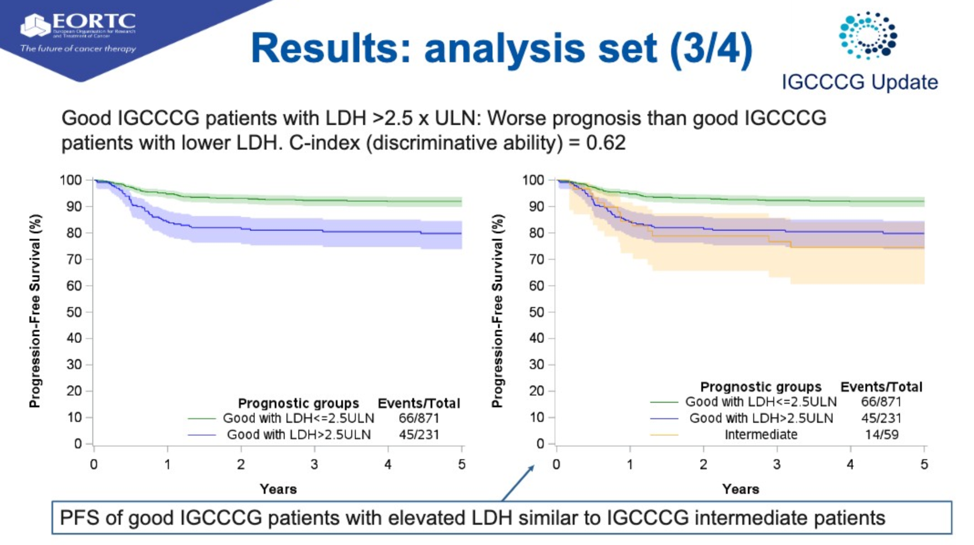 This finding was validated in an independent validation set of 796 patients.

In summary, this analysis identified improved PFS and OS according to the 1997 classification and identified 2.5 x the upper limit of normal (ULN) of LDH as a cutoff point and independent prognostic factor that identifies men with intermediate-risk seminoma in the absence of extrapulmonary visceral metastases. The implications for this reclassification on therapy were discussed in a separate presentation.