Barcelona, Spain (UroToday.com) Since its publication in 1997, the International Germ Cell Cancer Collaborative Group (IGCCCG) classification has stratified patients with disseminated germ cell tumors into good, intermediate or poor risk groups based on histology, tumor location, and serum tumor markers. This classification system was established using clinical data from just over 5000 non-seminomas and 600 seminomas treated in ten different countries between 1975 and 1990. Not all patients in this group received cisplatin therapy, and there has been much discussion since regarding prognostic heterogeneity within the three classifiers.

Dr. Silke Gillessen and colleagues presented the results of an academic effort to update survival rates in non-seminomatous germ cell tumors in a modern cohort using the original 1997 IGCCCG classification and identify new prognostic factors to better understand disease heterogeneity.  To do so, the authors assembled a cohort of 9,677 patients with pre-chemotherapy stratification information from 30 centers treated with cisplatin and etoposide-based first line treatments from 1990-2013. This cohort was limited to males with no prior chemotherapy for metastatic disease. Extragonadal primaries were included with the exception of primary CNS tumors.

The application of the original classification to this contemporary cohort illustrated clear improvements in patient outcomes, specifically with progression-free survival (PFS) for poor-risk patients and overall survival across all three risk groups.

When applying the new model to a validation patient data set, patients were found to cluster into 8 groups of ascending risk score at three years, suggesting that the new model offers more granularity than the prior classification. The new model also identifies a very-poor risk group (purple line below) that was previously grouped with poor risk. 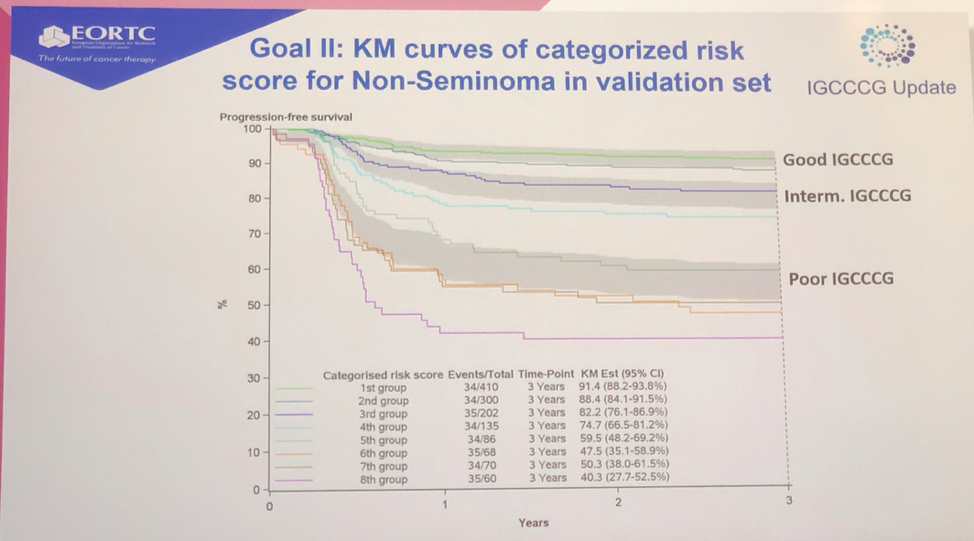 Overall, this study validates the original 1997 IGCCCG prognostic model and highlights the improvement in patient outcomes since 1990, identified new prognostic markers of age and presence of lung metastases, and created a new prognostic model to offer greater granularity of patient risk. This information will likely help inform future clinical trials, especially those focused on the extremely poor-risk patient group. No data was presented on how the new classification may impact chemotherapy choice and duration, as this has yet to be determined.

An online calculator is being created for providers to input patient characteristics and obtain a patient-specific prognostic score. The proposed new model is to be further validated in an independent data set. This data will be augmented with the results of similar work focused on seminoma, to be presented in the future.