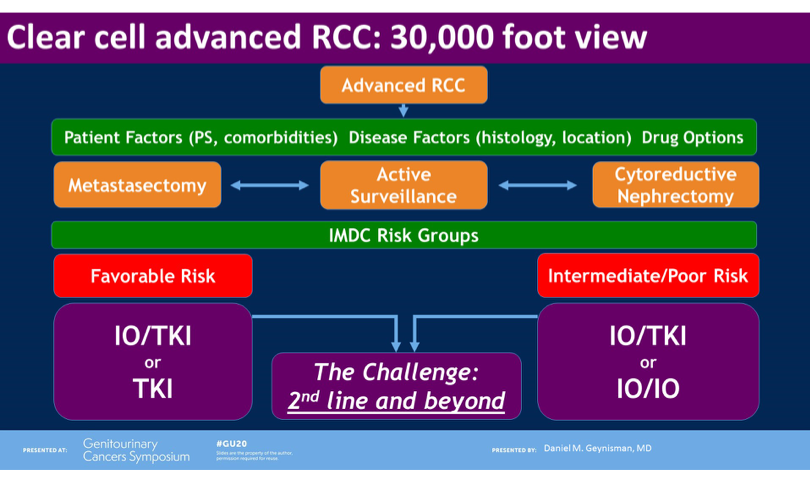 Firstly, it was noted that the therapy landscape of accRCC has rapidly changed in recent years on the back of the shift of first-line therapy to ipilimumab plus nivolumab or pembrolizumab plus axitinib, on the basis of large randomized phase II studies. This in turn has highlighted an ever-present challenge: the optimal therapy for 2nd-line and beyond. Indeed there are several existing options in this setting, most notably including nivolumab, cabozantinib and lenvatinib/everolimus. Focusing on 2nd-line nivolumab specifically, Dr. Geynisman highlighted the rationale of improving responses and time to progression of patients who had previously received a tyrosine kinase inhibitor (TKI).

Reviewing Abstract 612, a phase I/II study of sitravatinib combined with nivolumab in patients with accRCC that progressed on prior anti-angiogenic therapy, it was noted that the biological rationale of sitravatinib was to ultimately sensitize tumors to checkpoint inhibitor therapy with nivolumab. Sitravatinib is an orally-available small molecule, multi-targeted TKI. Inhibition of targets such as TAM family, Split family and c-MET is thought to enhance anti-tumor activity through depletion of immunosuppressive cell populations (for example, MDSCs and regulatory T cells) and increasing T cell priming.

The overall response rate (ORR) of 39% and disease-control rate of 92% for sitravatinib plus nivolumab was noted as very promising, and the progression-free survival of 10.3 months prolonged compared to historical studies of 2nd-line therapy for accRCC. Dr. Geynisman noted, however, that that it is unclear whether the tumor microenvironment is being modulated or whether the combinations may be merely active due to patients being previously untreated with an immune checkpoint inhibitor. The combination was noted to be safe and in need of further follow-up. Furthermore, he highlighted the need for data in patients previously treated with an immune checkpoint inhibitor given this is at the frontline of therapy for accRCC in 2020.

Abstract 611, a phase I/II study of the oral HIF-2 α inhibitor MK-6482 in patients with accRCC, was then discussed with a note on the Nobel Prize-winning effort to understand tumor hypoxia that has led to development of HIF inhibitors. It was noted that in this study population, 67% of patients had received both anti-PD1 and anti-VEGF therapies, and most were intermediate- or poor-risk per IMDC criteria. Dr. Geynisman noted the very promising efficacy data in this heavily-treated cohort, with 69% showing some degree of tumor shrinkage, a 24% overall response rate and 80% disease-control rate. These findings seem to be consistent in prior phase I and phase II studies of HIF-2a inhibitors across over 100 patients.

Furthermore, the toxicity profile of MK-6482 was very favorable with only 2/55 discontinuing therapy due to treatment-related adverse events. Generally, the cases of anemia and hypoxia observed were low-grade in nature. MK-6482 appears to not be associated with many of the adverse effects typically observed with VEGF TKI therapy. 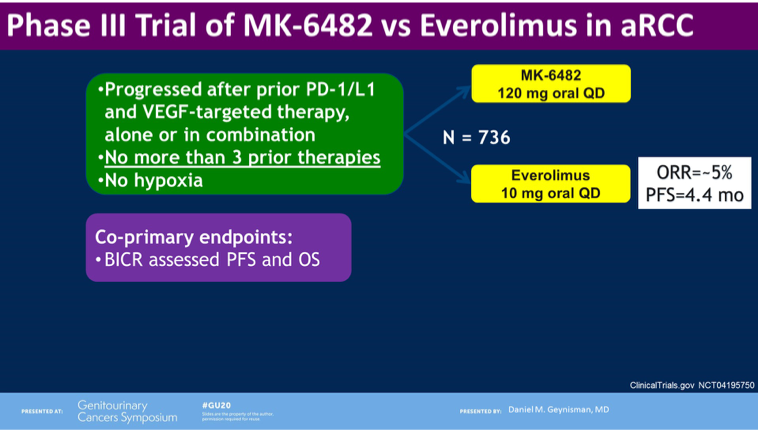 In summarizing, Dr. Geynisman noted that given the encouraging safety and efficacy data, a phase II randomized trial of MK-6482 versus everolimus for accRCC is underway, including patients have not received more than 3 lines of prior therapy. Results are eagerly awaited.