Underlying much of these new approaches to therapeutic cancer treatment is the well-known inactivation of the Von Hippel Lindau (VHL) tumor suppressor, which regulates the cellular response to hypoxia. VHL inactivation leads to stabilization of hypoxia-inducible factor (HIF) family transcription factors, leading to activation of target genes including the vascular endothelial growth factor (VEGF) pathway.

The protein HIF2alpha, key to the cellular phenotype in the presence of VHL inactivation, was previously thought to be undruggable. More recently, this was found not to be the case, and now two HIF2alpha inhibitors (PT2385, PT2977) have been evaluated in early stage trials. The PT2977 compound (MK-6482) showed an overall response rate of 24% and 80% of patients experienced clinical benefit. This drug is being tested against everolimus in a phase 3 trial that is currently underway included as part of a phase 3 trial looking at PT2977 (MK-6482) versus everolimus (NCT04195750). As resistance mutations have already been documented with the other HIF2alpha drug (PT2385), further work is needed to identify resistance mechanisms and possible strategies to overcome intrinsic or acquired tumor resistance. As earlier generation HIF inhibitors that showed potential additional benefit when combined with nivoumab, combination therapy with HIF2alpha inhibitors may also be possible.

It is known that hypoxia reduces the efficacy of cellular DNA damage repair (DDR) mechanisms. Therefore, loss of VHL may have a similar effect. In cell lines, VHL status correlates with expression of homologous recombination (HR) genes and sensitivity to PARP inhibition. However, classically renal cell carcinoma does not respond to DNA damaging agents such as radiotherapy or platinum chemotherapy. Furthermore, germline alterations in DNA damage repair genes are relatively uncommon in renal cell cancer patients.

With this background, could there be specific contexts wherein PARP inhibition could confer clinical benefit. Indeed, PARP inhibition is most effective in tumors where synthetic lethality can be demonstrated (such as with a germline DDR alteration). There are several genomic alterations beyond germline DDR alteration that may confer sensitivity to PARP inhibition. BAP1 is a frequently mutated gene in RCC that is associated with poor prognosis. It is required for efficient assembly of HR factors after DNA damage in the form of a double strand break. Cell lines with BAP1 loss and consequently HR repair deficiency are more sensitive to radiation or PARP inhibition. FH and SDH deficient tumors are thought to have a “BRCAness” phenotype as they also show evidence of deficient HR. These tumors show increase level of DNA double strand breaks. In preclinical models, adding fumarate or succinate (mimicking loss of the FH and SDH enzymes) can recapitulate a HR deficient state, and PARP inhibition in xenografts derived from FH and SDH deficient tumors is effective relative to enzyme-intact tumors. Finally, loss of ARID1A function (a member of the chromatin remodeling SWI/SNF complex) impairs activation of the DDR gene ATR, so this context may also be vulnerable to the “double-hit” of PARP inhibition.

Based on these preclinical and clinical observation, many trials are in progress to evaluate PARP inhibition in different contexts: 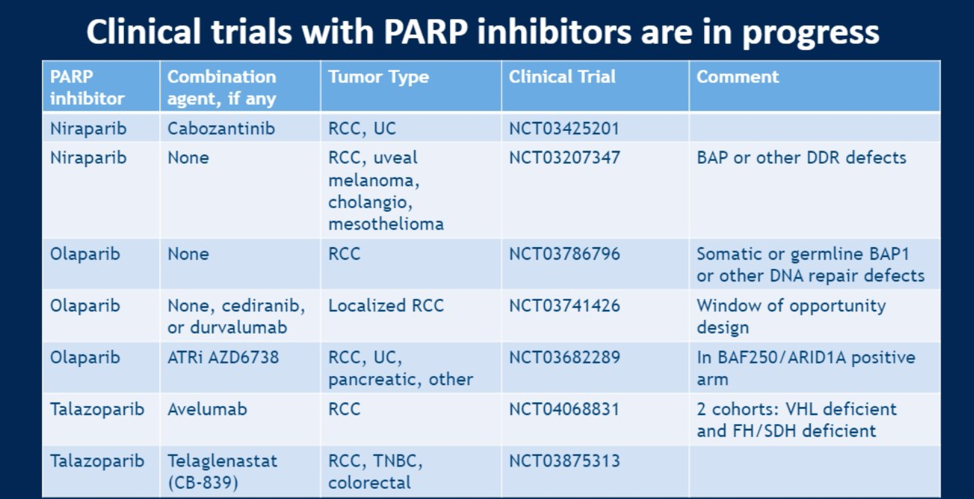 Work is underway to explore the role of telaglenastat (CB-839) in combination with either PARP inhibition or TKI therapy. This drug targets glutaminase, which converts glutamine (the most abundant amino acid in plasma) to glutamate thus both stimulating the Krebs cycles (by ultimately resulting in more alpha-ketoglutarate and overcoming Warburg-effect mediated abnormal glucose metablism) and providing fuel for nucleic acid synthesis. Inhibition of glutaminase is thought to decrease nucleic acid pools that could be used for repairing DNA damage and have been shown to be synergistic with PARP inhibitors in preclinical models.

Additionally, clinical studies are underway looking at the combination of telaglenestat with either cabozantinib or everolimus. Based on promising phase 1 data, the phase 2 CANTATA study (schema shown below) is ongoing with primary endpoint of progression free survival and secondary endpoint of overall survival. 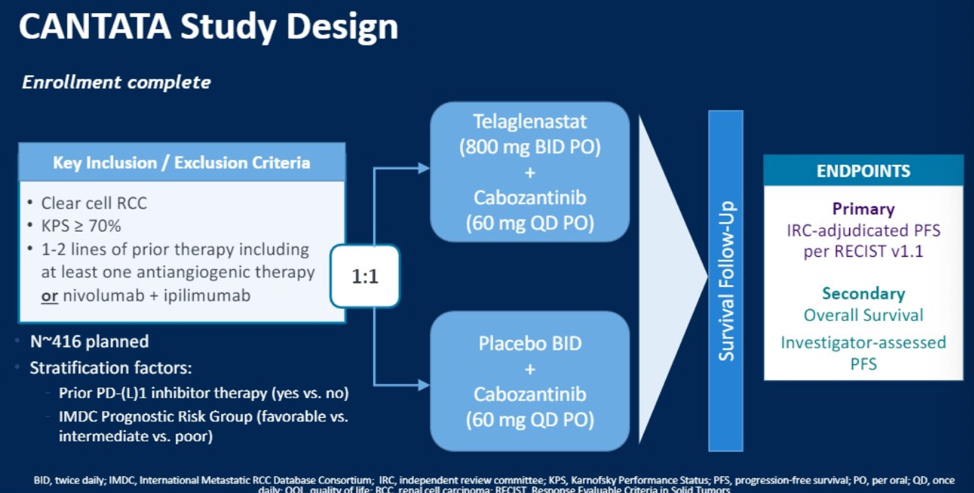 The phase II ENTRATA study looking at the combination of telaglenastat and everolimus, which synergistically inhibited tumor growth in preclinical models, was recently reported at ESMO 2019. 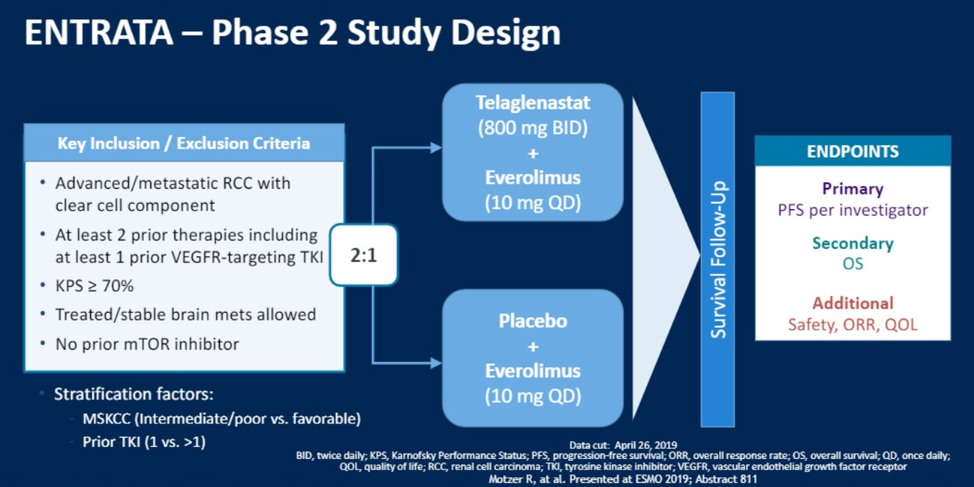 In light of the success of combination tyrosine kinase inhibition (VEGF and others) with immunotherapy, the TKI sitravatinib is being explored in combination with with nivolumab. This agent targets numerous signaling modules including TAM (Tyro3, Axl, Mer), VEGFR, and c-Met. A 39% response overall response rate was reported by Msauoel et al at this conference in 38 evaluable patients treated with sitravatinib and nivolumab.

Finally, Dr. Rose described bempegaldesleukin (NKTR-214), an oral PEGylated IL-2 prodrug that binds and agonizes CD122 (the IL2Rbeta subunit), which is thought to promote immune system recognition of tumor cells by expanding CD4 and CD8 T cell populations in both the circulating blood as well as tumor microenvironment. This agent is being evaluated in multiple disease settings, including NCT03729245 comparing NKTR-214 plus nivolumab versus investigator’s choice of either sunitinib or cabozantinib in advanced metastatic RCC (shown below). 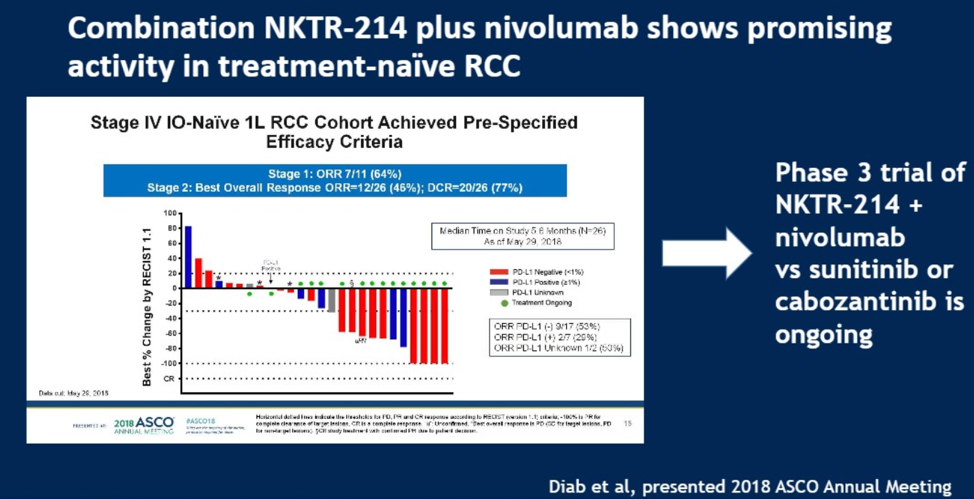