San Francisco, California (UroToday.com) During the session on optimizing first line therapy for the treatment of Renal Cell Carcinoma (RCC), Elizabeth Plimack, MD discussed the toxicity profiles and side effect management for these first line therapies. Dr. Plimack notes that with the increasing utilization of combination therapy, we are seeing overlapping toxicity for these combinations, namely rash, diarrhea, hepatitis, hypothyroid and altered mental status. This is summarized in the following figure: 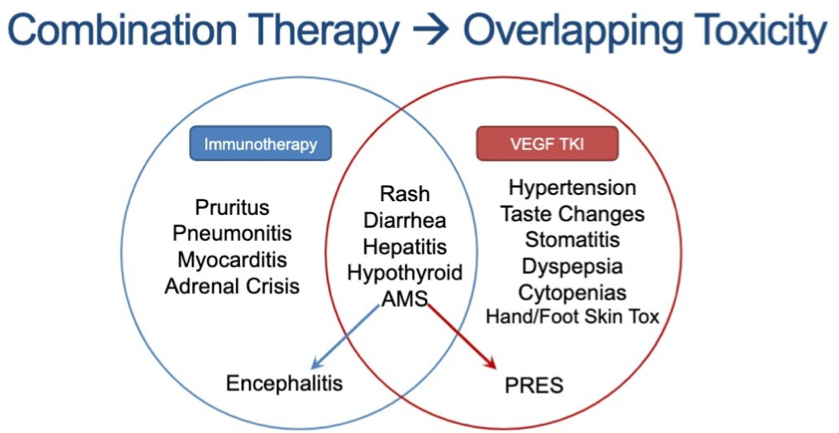 Dr. Plimack then presented a case of a 24-year-old woman with a translocation RCC that in 2011 had a right partial nephrectomy (T1aN0M0), but developed a recurrence in 2012. She then underwent a right radical nephrectomy, right adrenalectomy and retroperitoneal lymph node dissection. She also had small lung nodules and local recurrence at the first post-op scan. From 2012-2014 she underwent observation of slowly growing metastatic disease, but in 2014 received nivolumab + ipilimumab on study. The evening after her first infusion she developed water bowel movements, was hospitalized and colonoscopy showed focal acute cryptitis. She was treated with IV methylprednisone, tapered to PO prednisone and was off steroids by 2 months. Dr. Plimack then opted for a nivolumab re-challenge after nivolumab + ipilimumab and the patient did not have further colitis, but did develop adrenal insufficiency and hypothyroidism that was treated with replacement therapy. She then discontinued therapy after four months secondary to radiographic progression of her disease.

Dr. Plimack then highlighted the principles of IO toxicity management:

The next case presented was a 74-year-old woman that had a left nephrectomy 20 years ago for stage II clear cell renal cell carcinoma (ccRCC) who then subsequently presented with incidentally detected, asymptomatic metastatic disease to the body and tail of the pancreas (favorable risk IMDC). Dr. Plimack opted to start her on pazopanib 800 mg daily. There are many side effects of VEGF-TKIs, most commonly/debilitating being diarrhea (52%) and fatigue (19%). During treatment, she had diarrhea and fatigue, the pazopanib was held and her fatigue resolves, as did diarrhea with the addition of loperamide. She was restarted on half dose (400 mg) of pazopanib and 12-week imaging showed regression of the pancreatic metastases. She was doing well until she had a seizure in the hospital parking lot, an MRI was obtained consistent with bilateral subcortical white matter increased T2 signal – posterior reversible encephalopathy syndrome (PRES). PRES is a rare (<1%) adverse effect of anti-VEGF therapy and typically occurs early in the course of therapy. The management is to treat the seizure with benzodiazepines/anticonvulsants, control hypertension, permanently discontinue the VEGF/TKI, and it should resolve within days after holding the drug. This patient’s seizure resolved and did not recur and an MRI three weeks later demonstrated near-complete resolution of the white matter changes. She then started a period of observation and 7 years later at age 80 she has been stable, asymptomatic and has not required further systemic therapy.

The principles of VEGF-TKI side effect management according to Dr. Plimack are as follows:

The 3rd case was a 54-year-old man that had a right partial nephrectomy in 2011 (pT3aN0M0 ccRCC) who then declined adjuvant pazopanib vs placebo clinical trial. In 2016, he had completed five years of CT surveillance and continued with renal U/S and chest x-rays. In 2019 he had a small lung nodule on chest x-ray (confirmed with chest CT) and a biopsy of the lesion indicated ccRCC (intermediate risk IMDC secondary to serum calcium being great than the upper limit of normal). He was then started on axitinib + pembrolizumab and during the first week had hypertension that resulted in axitinib being held. Following maximization on antihypertensives, axitinib was resumed at 3 mg BID. However, mid cycle #5 he had nausea and vomiting and axitinib was once again held. After three days, he was feeling better but his LFTs were elevated and he was admitted overnight for observation after which the numbers normalized.