(UroToday.com) Following three abstract presentations in the poster discussion session focused on Kidney and Bladder cancers at the 2022 American Society of Clinical Oncology Annual Meeting held in Chicago and virtually, Dr. Matthew I. Milowsky provided a discussion of how these data can help us understand to how we may improve outcomes for patients with bladder cancer across its natural history and many stages.

He first addressed two abstracts (4517 and 4515) assessing the role of perioperative therapy for muscle-invasive bladder cancer (MIBC). He noted the results of the AURA trial as presented by Dr. Chanza which assesses the role of avelumab in perioperative care. The first cohort of this trial, including patients who are cisplatin-eligible, was presented at ESMO 2021. This cohort had a pathological complete response rate of 64% in patients treated with dose-dense MVAC and avelumab and 57% in patients treated with cisplatin, gemcitabine, and avelumab. 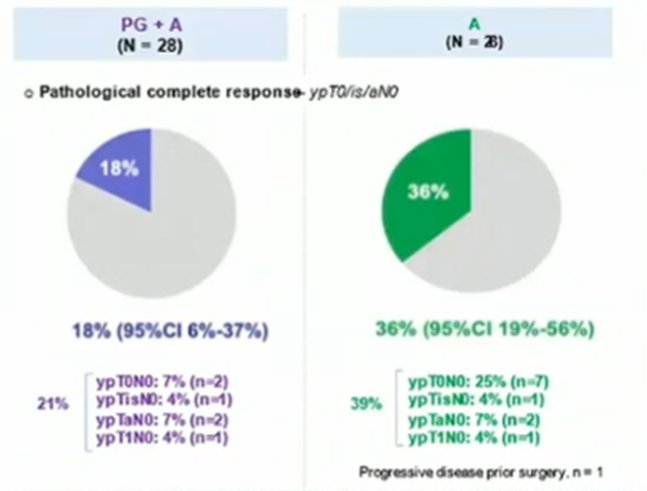 The toxicity profile was as expected of these agents in this setting: there were no treatment-related deaths, no patients failed to undergo surgery as a result of an adverse event, and no major surgical complications or morbidity was noted.

Dr. Milowsky then contrasted the results of this trial with prior studies of pre-operative immunotherapy noting that the pathologic complete response was in keeping with the established literature, though the pathologic downstaging rate was somewhat lower than in previous studies.

Dr. Milowsky then discussed why the combination therapy arm performed so poorly. Previous studies have suggested promising results of chemoimmunotherapy in patients with MIBC, with pathological complete response rates as high as 44% and pathological downstaging rates of up to 69%.

In this vein, he then moved on to discuss the results of the SAKK 06/17 trial, a prospective evaluation of cisplatin, gemcitabine, and durvalumab prior to radical surgery, followed by adjuvant durvalumab.

Unlike most studies in this disease space, the authors included event-free survival as the primary endpoint. He first noted that the vast majority of enrolled patients were able to complete neoadjuvant systemic therapy and radical surgery as planned. In the adjuvant space, 32 patients among the 53 who underwent radical surgery completed durvalumab according to protocol. In addition to the pathologic complete response rate of 34% and the pathologic downstaging rate of 60.4%, he noted that this regime was clearly clinically active given that 66.7% of patients with clinically node positive disease didn’t have evidence of nodal involvement at the time of surgery. 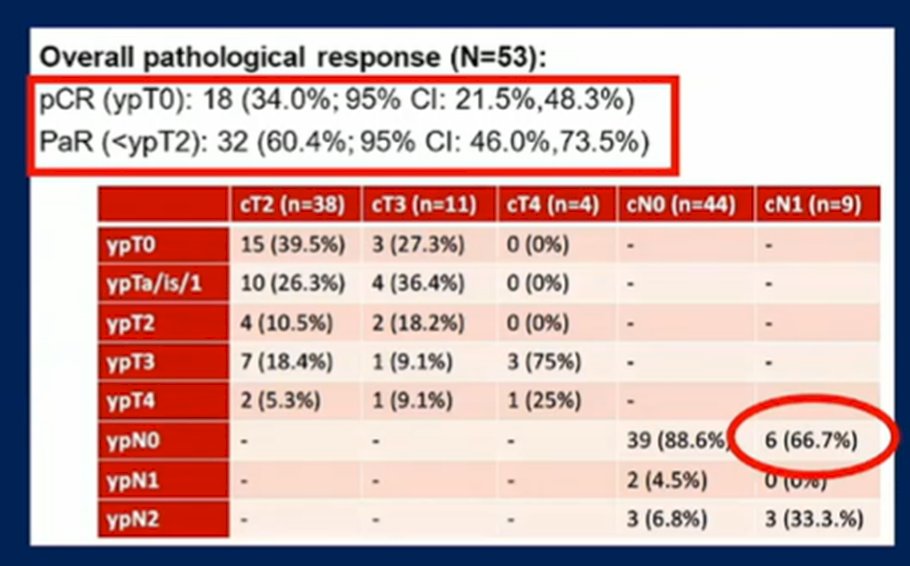 He further noted that this regime was well tolerated in addition to meeting the primary endpoint (with event free survival of 76.1% at two-years) and showing promising overall survival. However, based on results stratified by pathologic stage, Dr. Milowsky emphasized that patients with ypN+ disease had particularly poor outcomes, highlighting the important prognostic value of this finding.

Biomarker substudies of SAKK 06/17 showed an important prognostic value of PD-L1 expression as well as MTAP expression. MTAP deficiency is associated with a compromised anti-tumor immune response in these patients. Thus, when examining cross-trial comparisons, he raised the question of whether the addition of chemotherapy to IO is necessary, emphasizing that he was “not convinced that there are clear differences” between immunotherapy monotherapy and combined chemoimmunotherapy.

In a comparison between the SAKK 06/17 data and results from VESPER, he noted that 2-year progression-free (or event-free) survival was essentially comparable for patients treated with gemcitabine, cisplatin and durvalumab in the SAKK 06/17 trial (76%) and those treated with dd-MVAC in VESPER (77%) and higher than those who received gemcitabine and cisplatin (62%). Thus, he then contrasted these data with those from ABACUS in which two-year disease free survival was 68%.

Dr. Milowsky then considered what endpoints should be used in the neoadjuvant setting for MIBC, emphasizing that pathological complete response is commonly used. However, neither individual-level or trial-level surrogacy between pCR and time-to-event outcomes such as event-free survival, disease-free survival, or overall survival as been established. However, pCR may be useful to guide subsequent therapy on a trial level, with treatment intensification for those who don’t achieve a pCR.

He further noted that there are a number of ongoing trials investigating combination chemo-immunotherapy in MIBC, including NIAGARA, KETNOTE-866, and ENERGIZE.

However, while immune checkpoint inhibitors have gained an increasingly large role in the treatment of patients with urothelial carcinoma, other treatment approaches are also being explored. One of these, the antibody drug conjugate enfortumab vedotin is currently being investigated in the peri-operative setting following initial studies among patients with metastatic disease.

The primary analysis of this study, as published in the New England Journal of Medicine, was performed as an interim analysis at 11 months. With extended follow-up out to 24 months, Dr. Milowsky noted that the results in terms of both progression-free (HR 0.63 vs 0.62) and overall survival (HR 0.70 vs 0.70) were essentially identical to the primary publication. Further, there were no new safety signals with the most prominent events being skin toxicity, neurotoxicity, and hyperglycemia.

Moving earlier in the disease space, he highlighted the EV-103 trial which examines the combination of enfortumab vedotin with pembrolizumab. Early results of this combination suggest promising results with an objective response rate of 73.3% and median progression-free survival of 12.3 months. Thus, this offers the potential for a platinum-free first-line regime. This approach will be more formally tested in the EV-302 trial which is a front-line trial of enfortumab vedotin and pembrolizumab versus gemcitabine and cisplatin in platinum-eligible patients with locally advanced or metastatic urothelial carcinoma.

In conclusion, Dr. Milowsky noted that both immune checkpoint inhibitor monotherapy and in combination with chemotherapy have demonstrated promising pathological response rates when used a neoadjuvant therapy in MIBC. However, it is not clear that the combination is better than either chemotherapy or immunotherapy alone. Further, enfortumab vedotin remains a standard of care in advanced pretreated urothelial carcinoma. He noted that there has been a dramatic increase in advanced for treatment options in bladder cancer over the past few years, following a relatively slow rate of progress in the preceding decades.