(UroToday.com) At the 2022 American Society of Clinical Oncology Annual Meeting held in Chicago and virtually, the poster discussion session focused on Kidney and Bladder cancers on Saturday evening included a presentation from Dr. Richard Cathomas discussing the role of peri-operative chemoimmunotherapy for patients undergoing radical cystectomy for muscle invasive urothelial carcinoma based on the SAKK 06/17 trial.

Cisplatin-based neoadjuvant chemotherapy has been established as a paradigm among eligible patients with muscle invasive bladder cancer for nearly two decades now. Based on extrapolation, this approach is often used in upper tract disease as well. Immunotherapy has an increasingly large role in the treatment of urothelial cancers and has been evaluated in the neoadjuvant setting as well. The SAKK 06/17 trial was designed to evaluate the addition of perioperative immunotherapy with the anti-PD-L1 antibody durvalumab in the multimodality treatment of resectable muscle invasive urothelial carcinoma (MIUC). Notably, compared to most similar trials which examined the primary endpoint of pathological complete remission rate, this study evaluated the clinically more relevant primary endpoint of event-free survival (EFS) at 2 years.

Methodologically, SAKK 06/17 is an open-label, single-arm phase II study including 61 cisplatin-eligible patients with stage cT2-T4a cN0-1 operable MIUC (NCT03406650). Following enrollment, patients received four cycles of neoadjuvant cisplatin and gemcitabine every three weeks in combination with 4 cycles of durvalumab 1500mg every 3 weeks followed by complete resection. Adjuvant durvalumab 1500mg was given every four weeks for 10 cycles or a maximum of 40 weeks.

The primary endpoint was EFS at 2 years following the initiation of the neoadjuvant phase of treatment. An event was defined as progression during neoadjuvant therapy, the appearance of metastases, locoregional recurrence after surgery or death from any cause. In terms of sample size, the authors calculated that 58 patients were needed to demonstrate a 2-year EFS of 65% or greater, compared to null hypothesis of 50% or less, with 80% power and a one-sided type I error of 10%. Beyond EFS, the authors assessed secondary endpoints including pathological response, recurrence-free survival after R0 resection (RFS), overall survival (OS) and safety. In this analysis, the authors provide results of the primary analysis among all patients who received at least one dose of durvalumab.

Between July 2018 and September 2019, 61 patients were recruited at 12 sites. The analytic subset of patients who received at least one dose of durvalumab includes 58 patients of whom 79% were male and the median age was 68 years. The vast majority (95%) had bladder cancer while 5% had upper urinary tract or urethral cancer. In terms of clinical stage, 69%, 21%, and 10% of patients at cT2, cT3, and cT4 disease, respectively. Clinical positive lymph nodes (cN1) were found in 17%. Surgical resection was performed in 53 patients (91%) with 4 refusing surgery and 1 deemed unresectable. Negative margins (R0 resection) was achieved in 52 of 53 patients undergoing surgery (98%). Notably, 48 (91%) patients who underwent resection started adjuvant durvalumab and 32 (67%) completed it. A pathological downstaging response to non-muscle invasive disease (< ypT2 ypN0) was achieved in 32 patients of whom 18 had a complete response (ypT0) and 14 had the residual non-muscle invasive disease (ypT1/a/is). Thus, pathological downstaging was seen in 60% of resected patients and 55% of the analytic cohort. 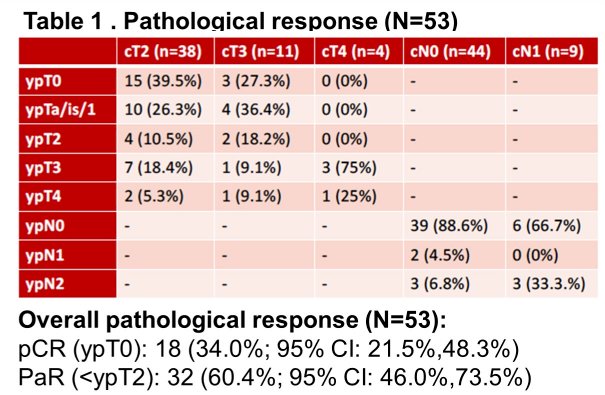 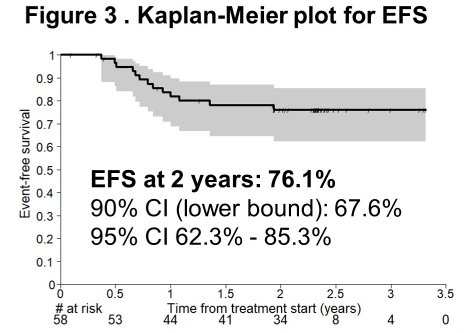 The authors therefore conclude that the addition of perioperative durvalumab to the standard of care neoadjuvant chemotherapy and surgical resection for patients with resectable MIUC results in a high EFS, RFS and OS at 2 years, particularly among those patients with downstaging following neoadjuvant therapy.