(UroToday.com) As part of the 2021 American Society of Clinical Oncology Annual Meeting, a session entitled “Minority Enrollment in Cancer Clinical Trials”. Within this session, Dr. Daniel George presented on Differences in Toxicity and Outcomes utilizing a Race-based Case Study.

Dr. George emphasized that these disparities are largely driven by health care access disparities and socioeconomic factors, though there are also biological characteristics that may contribute.

Among the many agents which have been approved in the treatment of patients with advanced prostate cancer over the past decade, he then transitioned to discussing abiraterone acetate which was initially approved in men with metastatic castration-resistant prostate cancer following docetaxel chemotherapy (COU-301) but has subsequently been approved both in metastatic castration-resistant disease prior to chemotherapy (COU-302) and in metastatic castration sensitive disease (LATITUDE and STAMPEDE). Abiraterone is administered concurrently with oral steroids to prevent mineralocorticoid excess. In spite of this, the common adverse events relate to mineralocorticoid excess, including fluid retention, hypokalemia, and hypertension.

This led to a case-control analysis at Duke among patients treated with abiraterone. This demonstrated that African American patients were more likely to have > 30%, > 50%, and > 90% PSA declines and were less likely to have no PSA decline with therapy.

These data together formed the basis of a prospective evaluation of this question, designed as a prospective parallel-group trial of abiraterone by race. This study was performed among men with chemotherapy naïve metastatic castration-resistant prostate cancer. A total of 100 men were enrolled, with a planned stratification according to self-described race of 50 Black men and 50 White men who all received treatment with abiraterone acetate 1000mg orally daily in addition to prednisone 5mg orally twice daily.

Moving forward, the authors sought to determine whether there were differences in disease progression or adverse events. Dr. George emphasized that this was not designed as a head-to-head comparison of outcomes, but rather as a parallel-group study to characterize the following outcomes in both Black and White men: radiographic progression-free survival. PSA kinetics, overall survival, and safety (adverse event rate and severity), as well as to explore GWAS associated with ancestry and outcomes.

The authors assumed that the study would be easy to accrue given that it would provide free access to a standard of care therapy; that Black men would be more difficult to accrue; that Black men would screen fail more often; that community sites with higher representation of Black patients would accrue better; and that race would not affect toxicity.

In the first year, they accrued only 7 patients within their cancer system. Other studies published in a similar time demonstrated difficulty accruing Black patients leading to premature study closure. Instead of taking this approach, Dr. George and colleagues expanded this study to a number of other sites and, subsequently, successfully increased accrual.

Notably, they were able to successfully accrue equally among both Black and White men, despite Black men comprising between 20 and 40% of the clinical populations at the centers where the trial was open. 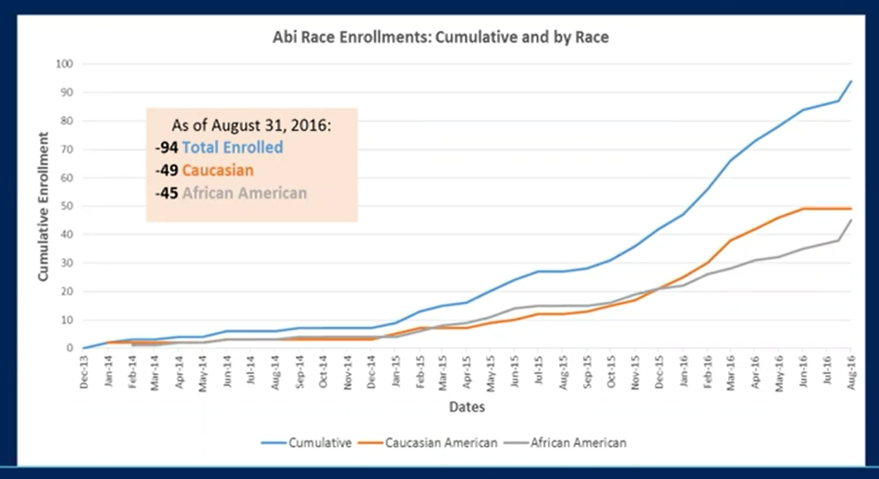 Further, contrary to the hypothesis, there was no difference in screen failures between Black and White men, despite higher rates of comorbidity among the Black men. The vast majority of patients were accrued from academic, rather than community, sites.

In terms of oncologic outcomes, the authors demonstrated no difference in radiographic progression-free survival or overall survival on the basis of race. Further, the median rPFS and OS were comparable to the randomized COU-302 trial. Interestingly, Black men had longer time to PSA progression (16.6 months vs 11.1 months).

However, they did find differences in toxicity according to race: hypertension, hypokalemia, and hyperglycemia were more common in Black men, suggesting differential effects on adrenal function.

Considered in total, nearly every one of the assumptions leading into the trial were proven to be untrue.