(UroToday.com) One of the fastest moving disease spaces in prostate cancer in metastatic castration-sensitive prostate cancer. While androgen-deprivation therapy (ADT) alone was the standard treatment five years ago, now there are a number of treatment options that have been shown to improve overall survival, including docetaxel, abiraterone acetate, enzalutamide, and apalutamide. The phase III ARCHES trial, along with the ENZAMET trial, provided the basis for enzalutamide’s approval in this disease space. However, data from each of these trials have suggested that the benefit of treatment intensification may differ on the basis of disease extent. To explore this further, in the Prostate, Testicular, Penile Poster session at the 2021 American Society of Clinical Oncology Annual Meeting held on Friday, June 4th, 2021, Dr. Andrew Armstrong presented a post-hoc analysis of the ARCHES trial (NCT02677896) aimed at evaluating the efficacy of enzalutamide with ADT in men with bone oligometastatic metastatic hormone-sensitive prostate cancer (mHSPC) compared to polymetastatic mHSPC.

While previously presented and published, briefly, the ARCHES trial enrolled 1150 men with mHSPC and randomized them in a 1:1 fashion to enzalutamide (160 mg/day) + ADT or placebo + ADT, stratified by disease volume and prior docetaxel chemotherapy.

In this post hoc analysis, the authors restricted this cohort to patients with bone metastases only and categorized these patients as oligometastatic (1–≤5 metastases) or as polymetastatic (≥6 metastases) based on central review at screening. They then compared efficacy outcomes between treatment approaches across these groups.

Among 1150 patients in ARCHES, 512 had bone-only metastasis of whom 296 had ≤5 metastases. Among these 296 men, 160 were randomized to receive enzalutamide + ADT while 136 received placebo + ADT. Baseline characteristics were generally comparable between treatment arms and across subgroups. However, those with polymetastatic disease had more aggressive disease characteristics (higher Gleason score and PSA) and worse performance status. Similarly, those with oligometastatic disease were more likely to have received prior local therapy.

Compared to placebo, patients who received enzalutamide + ADT had significantly improved oncologic outcomes regardless of disease burden, as highlighted below. The forest plot emphasizes that, while the confidence intervals are wider or narrow between groups, the effect estimate is relatively consistent (ranging from 0.16 to 0.35).

Additionally, the combination of enzalutamide + ADT was associated with improvements in all secondary outcomes, regardless of the number of bony sites involved. 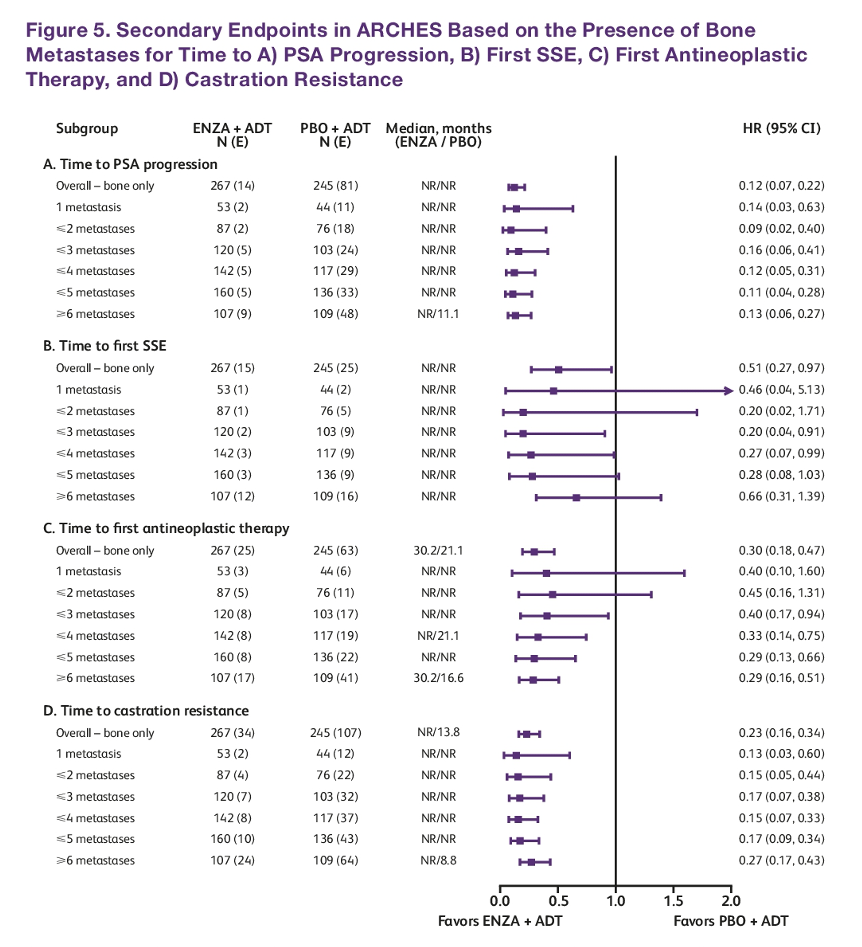 Additionally, the addition of enzalutamide consistently increased the proportion of patients who were able to achieve an undetectable PSA, though absolute rates were somewhat lower among those patients with polymetastatic disease. However, relative to those treated with placebo, those with higher volume disease who received enzalutamide had dramatically improved results. 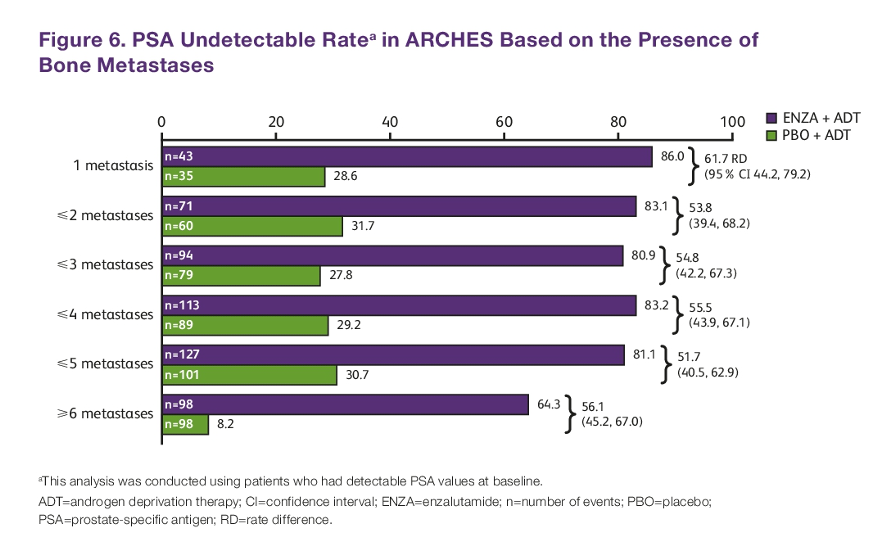