(UroToday.com) In this session, Dr. Andrea Apolo reviewed the rationale behind combination therapies for management in advanced renal cell carcinoma (RCC). Over the past 15 years, treatment for advanced RCC has focused on anti-VEGF molecules based on knowledge of the complex signaling interplay between VHL, hypoxia-inducible factors, and VEGF. More recently, it has become clear that tyrosine kinase inhibitors (TKI) used to target VEGF signaling can also modulate tumor immunity, leading to several phase 3 clinical trials proving the efficacy of combined TKI and immunotherapy for first-line therapy in advanced disease.

Dr. Apolo then turned her attention to the preceding three abstracts: (1) 42-month follow-up of KEYNOTE-426, which established the benefit of axitinib combined with pembrolizumab advanced clear cell RCC (ccRCC), (2) health-related quality of life (HRQoL) from the CLEAR trial which established the efficacy of lenvatinib and pembrolizumab in advanced RCC, and (3) the CANTATA study of the glutaminase inhibitor telaglenastat in combination with cabozantinib in pre-treated RCC patients.

Regarding the 42-month follow-up for KEYNOTE-426, Dr. Apolo first reminded the audience of the trial schema.

She then compared the efficacy data from this study, which showed both overall survival and progression-free survival benefit for axitinib and pembrolizumab relative to sunitinib, against other clinical trials for first line therapy in advanced RCC, providing the breakdown of patients by IMDC risk category as well. As can be seen in the table, each trial of either doublet immunotherapy or immunotherapy plus TKI prolonged overall survival relative to sunitinib with varying response rates. 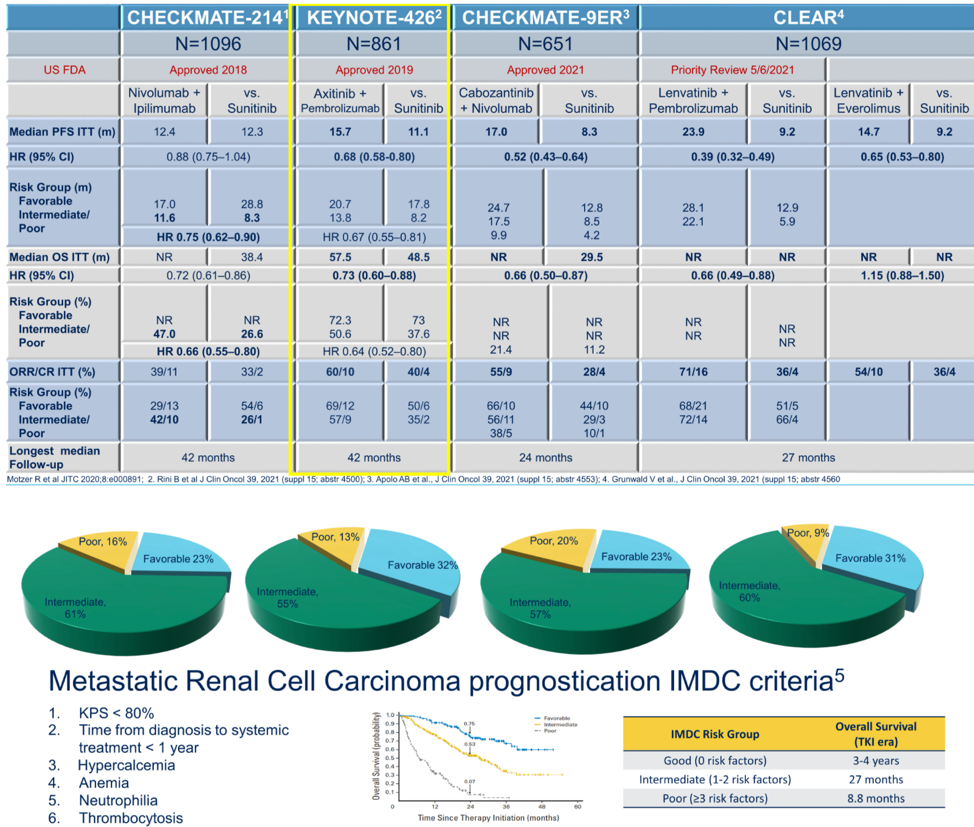 Ongoing first-line immunotherapy/TKI randomized control trials include COSMIC-313, testing cabozantinib, nivolumab, and ipilimumab with versus nivolumab and ipilimumab. Future work should also focus on better understanding which patients can stop therapy to maximize their treatment-free survival, how many patients are able to go on to subsequent therapies, and how well each regimen is tolerated both from typical CTCAE metrics as well as patient-reported quality of life outcomes.

Dr. Apolo then focused on the HRQoL data from the CLEAR study, the schema for which is shown below.

She included copies of each of the HRQoL tools. 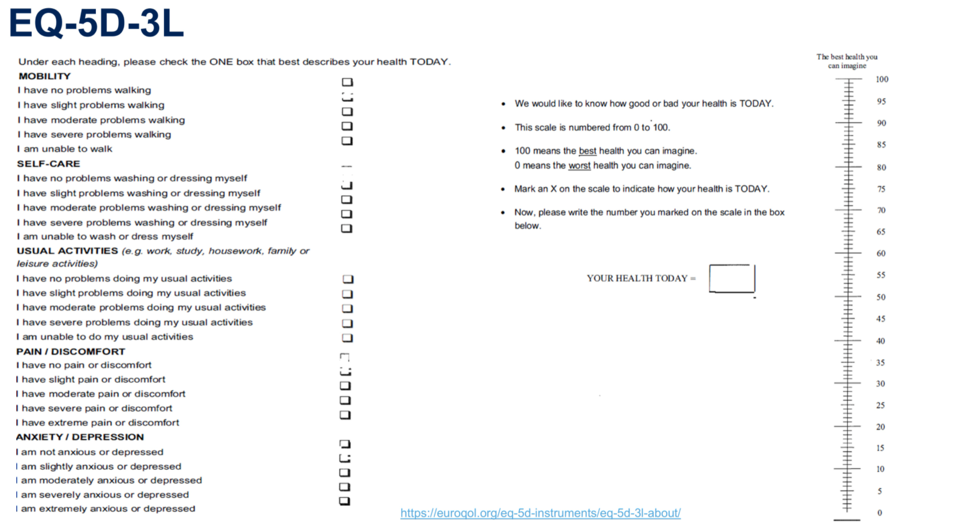 The data from Dr. Motzer’s presentation show an improvement in HRQoL in certain domains within each tool for lenvatinib and pembrolizumab relative to sunitinib, specifically in physical functioning, fatigue, dyspnea, and constipation. On the other hand, sunitinib had superior HRQoL in the domains of global health, pain, appetite loss, and diarrhea when compared to lenvatinib and everolimus. Though there were specific domain improvements for lenvatinib plus pembrolizumab, by the overall scale scores there was no difference in HRQoL. Finally, Dr. Apolo noted that the first-line advanced RCC studies use different HRQoL metrics to some degree, further confounding comparisons across trials, and all these analyses are exploratory. She provided the table below indicating which HRQoL tools were used in which studies, and how the intervention arm compared to the control arm of sunitinib for each by overall scale score (not by specific domains).

Dr. Apolo then described the pre-clinical and early clinical data that led to the randomized phase 2 CANTATA study of the glutaminase inhibitor telaglenastat. RCCs have high level of glutaminase expression, which converts glutamine into glutamate, which can then fuel the cellular production of energy through the Krebs cycle. This mechanism is thought to overcome the Warburg effect and altered glucose utilization in tumor cells.

This was a negative study, with no difference in median progression-free survival or overall survival between randomization groups. The overall response rate was about 30% in each arm, with only 2 complete responses. There was an intriguing numerical but statistically non-significant trend of PFS benefit for patients who had received prior immune checkpoint blockade (11.1 versus 9.2 months).

Dr. Apolo provided a comparison of the outcomes from CANTATA to those of METEOR, which tested cabozantinib versus everolimus in patient previously treated with anti-angiogenic therapies.

In addition to the multiple treatment options for first-line advanced RCC, the question remains of how to sequence subsequent therapies. To further elucidate this, the PDIGREE trial is ongoing, which utilizes an adaptive approach based on response to test different options. The schema for this trial is shown below.

She concluded by discussing that although the CANTATA study showed no evidence of additive benefit over cabozantinib alone, it did serve to further support the use of cabozantinib in the second or third-line setting after immune checkpoint inhibition.