(UroToday.com) The Plenary agenda of the 2021 American Society of Clinical Oncology (ASCO) Annual Meeting included a session, entitled “So Your Patient with Kidney or Bladder Cancer Responded to Immunotherapy: What's Next?”. In this context, Dr. Tom Powles from Barts Cancer Institute discussed whether we can consider immunotherapy a truly curative approach for patients with advanced kidney and bladder cancer.

Dr. Powles began by considering the question of whether complete response in advanced disease may be considered cure. He emphasized that the complete response rates for first-line PD-1 combination therapy in advanced renal cell carcinoma (RCC) are low. Further, they are not an accurate assessment of durable remission or cure, though there is likely a correlation. Using data from the JAVELIN Renal 100 study, he highlighted that the median progression-free survival for patients with complete response after first line chemotherapy is approximately 4 months.

He then presented data from the CheckMate 214 trial of ipilimumab and nivolumab. While complete response rates are low, there is a tail in the progression-free survival curve, with approximately one third of patients remaining free of progression after many years. A similar effect was observed with maintenance avelumab in bladder cancer.

As we seek to cure more patients, he emphasized the importance of three factors:

Assessing the first of these, he highlighted the question of biomarker driven patient selection. Dr. Powles emphasized that the PD-L1 biomarker is many different biomarkers and, for the most part, is poorly predictive of the response to immunotherapy in either urothelial cancer or RCC. Instead, he suggested that we could consider a trial among patients with advanced RCC who are PD-L1 biomarker positive and then randomize them to dual checkpoint inhibition with ipilimumab and nivolumab or a combination of VEGF-TKI with anti-PD-1 treatment.

Focusing on kidney cancer, he emphasized recent work looking at molecular subgroups within RCC which are associated with the response to checkpoint and angiogenesis blockade. This approach has defined seven groups including angiogenic/stromal, angiogenic, complement/ɷ-oxidation, T-effector/proliferative, proliferative, stromal/proliferative, and snoRNA.

Importantly, while each of these molecular subsets is associated with a differential response to checkpoint and angiogenic blockade, notably, all of them are represented in each of the IMDC risk groups. This emphasized that IMDC risk categorization on the basis of clinical characteristics is unlikely to be sufficient to guide treatment decision.

Further, in urothelial carcinoma, Dr. Powles emphasized that there is a strong correlation between a tissue-based and ctDNA based assessment of FGFR alterations. Thus, we may be able to move away from tissue based biomarker analysis. Further, the use of serum-based biomarkers can allow for longitudinal analysis. Initial work demonstrates that changes in ctDNA FGFR alterations may be followed over time, and correlate with response to FGFR -targeting therapy.

Dr. Powles then moved to discussion of the second way in which he suggested we will be able to cure more patients: improving the drugs used. Using the example of advanced RCC, he highlighted that while we’ve already moved from monotherapy as the standard of care to combination therapy, a triplet approach is currently being investigated. The combination of cabozantinib, ipilimumab, and nivolumab has demonstrated potential for tumor response in genitourinary cancers and as now being examined in a randomized comparison with nivolumab and ipilimumab in the COSMIC-313 trial. Dr. Powles suggested that, in his opinion, we should expect higher response rates and longer progression-free survival with the triplet approach; however, it remains to be seen whether we will cure more patients. He did highlight the example of testis cancer in which combination systemic therapy is both necessary and sufficient for cure.

He then moved to discussion of recent data published on the hypoxia inducible factor-2α inhibitor belzutifan in advanced RCC. He emphasized that, while there were no complete responses, progression-free survival was quite long at 15 months. Dr. Powles emphasized that he did not think that monotherapy with belzutifan would result in significant complete responses or cures, but that it may do so when used in combination with other agents in triplets or quadruplets.

Moving from RCC to urothelial carcinoma, Dr. Powles highlighted data from the DANUBE trial demonstrating that the combination of durvalumab and tremilimumab improved overall survival in patients with PD-L1 positive metastatic urothelial carcinoma. As this was not a primary outcome and those that were selected did not demonstrate significant improvements, this trial was negative. Further the combination of ipilimumab and nivolumab in PD-L1 positive urothelial carcinoma is being tested against chemotherapy. However, this approach formed the basis for the forthcoming NILE trial of durvalumab and tremilimumab, in combination with chemotherapy versus chemotherapy alone. In Dr. Powles view, there is an important role for CTLA-4 inhibition in urothelial carcinoma. Additionally, antibody-drug conjugates such as enfortumab vedotin have proven benefit in advanced lines of therapy for patients with metastatic urothelial carcinoma as monotherapy. However, enfortumab vedotin has been assessed in combination with pembrolizumab as first-line treatment for patients who are cisplatin-ineligible. These demonstrate activity in terms of the change in tumor size from baseline, with effects in patients with both low and high PDL-1 status. This approach is now going being assessed in a randomized, phase III trial in comparison to platinum-based chemotherapy. He suggested that he expects this trial to be positive. He also highlighted that another antibody-drug conjugate (Sacituzumab govetican) has demonstrated efficacy in advanced disease, though it has not thus far been assessed in the front-line setting.

However, he emphasized that the targeted, biomarker driven approach shows somewhat less promise in urothelial carcinoma than in RCC. A recently published adaptive, biomarker driven phase Ib study demonstrated that, even among selected patients who should be enriched for characteristics that should confer treatment sensitivity, there “weren’t any home runs” with none of the combination therapies meaningfully outperforming durvalumab alone.

An adaptive, biomarker-directed platform study of durvalumab in combination with targeted therapies in advanced urothelial cancer 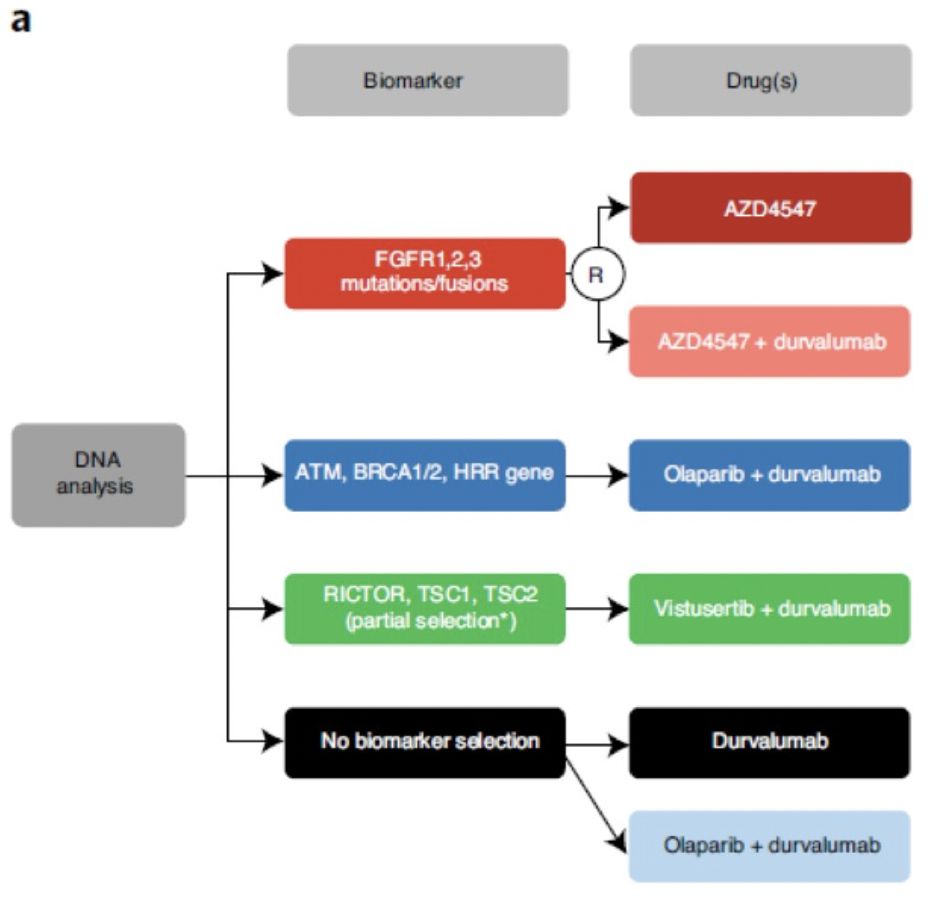 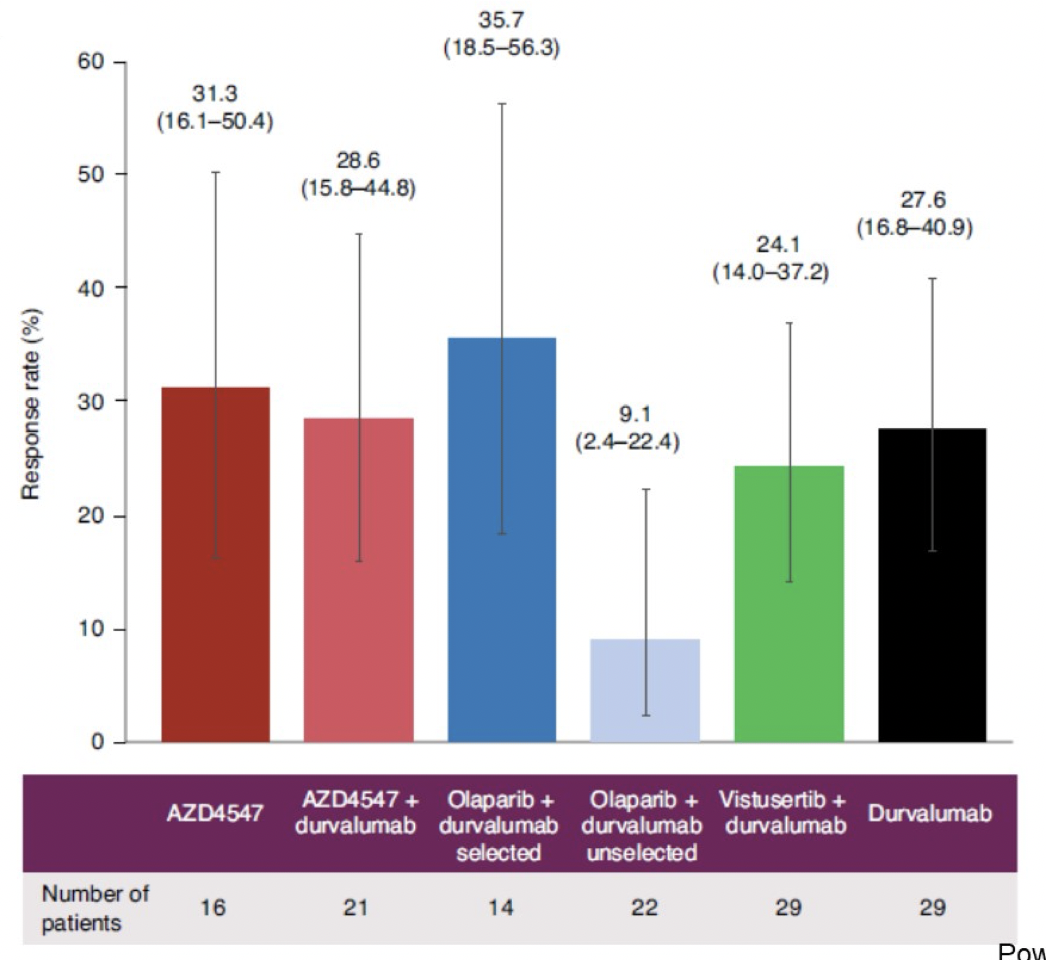 However, there are exciting approaches with new immunotherapy combinations, including for example tiragolumab with atezolizumab, which has been examined in patients with biomarker selecting non-small cell lung cancer.

He then moved to discussing the third tenet of improving cure for out patients, using the drugs in the right disease setting. To this end, he highlighted recent data demonstrating the disease-free survival benefit of adjuvant nivolumab in patients with high-risk urothelial carcinoma following radical cystectomy. While a statistically significant benefit was seen in the intention-to-treat population (hazard ratio 0.70, 98.31% ci 0.54-0.89), the effect was even larger among the biomarker selected group with PD-L1 expression of 1% or greater (hazard ratio 0.53, 98.87% CI 0.34-0.84). However, Dr. Powles emphasized that there are a number of remaining questions. Firstly, we have not yet seen overall survival benefits for adjuvant nivolumab. Further, why did we not demonstrate benefits in overall and progression-free survival wit the use of atezolizumab? Further, in the assessment of atezolizumab, there was not an apparent enrichment of effect in the biomarker selected patients. Dr. Powles emphasized that, in the adjuvant setting, we have many unanswered questions.

Such an approach is being tested prospectively in the IMvigor011 trial following cystectomy for high-risk urothelial carcinoma. Post-operatively patients will undergo serial ctDNA testing. Those who are negative will go on observation while those who are ctDNA positive will be randomized to atezolizumab or placebo and then followed forward to the primary endpoint of progression-free survival and the secondary endpoint of overall survival.

In contrast to this adjuvant approach, neoadjuvant approaches can be considered. In operable non-small cell lung cancer, the CheckMate 816 trial demonstrated a significantly higher rate of ypT0N0 disease (OR 13.94, 99% CI 3.49-55.75) for patients who received neoadjuvant nivolumab and chemotherapy compared with neoadjuvant chemotherapy alone. While pathologic complete response is a surrogate outcome and it remains to be seen whether this will translate to differences in survival and cure, this approach appears promising.

In bladder cancer, we can see that, thus far, combination approaches have not seemed to meaningfully improve outcomes compared to immunotherapy monotherapy.

He suggested a future trial (the NIAGARA trial, though there is an equivalent trial utilizing pembrolizumab) looking at the combination of neoadjuvant chemotherapy with durvalumab followed by surgery and then adjuvant durvalumab compared to standard neoadjuvant chemotherapy followed by surgery and post-operative surveillance. While overall survival remains the most important outcome, a trial like this may also assess surrogates such as pathologic complete response and progression-free survival.

In an “aspirational” suggestion, he proposed a trial examining anti-PD-(L)1, anti-CTLA-4, and antibody-drug conjugates in the neoadjuvant setting. This is perhaps most appropriate in cisplatin-ineligible patients.

He further highlighted that the KEYNOTE-564 data to be presented at this year’s ASCO meeting support adjuvant use of pembrolizumab in RCC.

In summary, he emphasized that cure is the long-term, durable elimination of cancer. While there are many ways to assess this, he suggested that complete response is not the best. Over the past few decades, we have seen advances in “cure” through better treatments. However, so far, biomarkers have not meaningfully changed the treatment paradigm thus far.