In this study, mCRPC patients on ADT that progressed on abiraterone were randomized to BAT or enzalutamide, with the option to crossover to the alternative therapy once clinical or radiographic progression was noted. The primary endpoint was to detect a difference in progression-free survival between BAT and enzalutamide therapy. Secondary endpoints included safety, radiographic response, PSA response within each arm and at crossover, PFS2 (time from initiation of therapy to progression on crossover), and overall survival.

The overall response characteristics are shown below. There was a numerically higher number of objective responses in the BAT arm compared to enzalutamide, but no differences were statistically significant. In the analysis of patients that crossed over to the alternative therapy, patients who underwent BAT then received enzalutamide had improved time to PSA progression, higher rates of 50% decline in PSA, higher objective response rates, and longer PFS2. 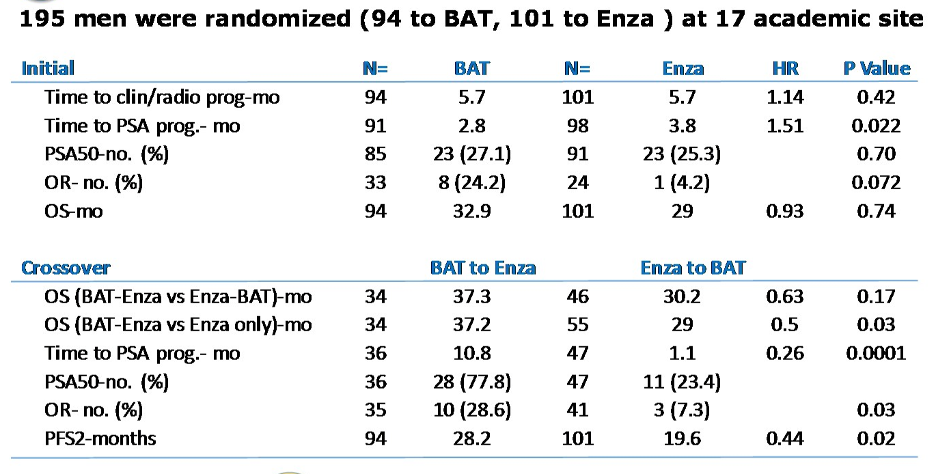 Patients in the BAT arm had favorable safety profiles, with less fatigue, insomnia, nausea, diarrhea, and hot flashes relative to patients on enzalutamide.

Overall, these data are very interesting and suggest that bipolar androgen therapy may sensitize patients who have progressed on abiraterone to derive greater benefit from enzalutamide therapy. Further investigation with larger cohorts and randomized study design as well as molecular analysis will help further delineate the efficacy of BAT in patients with mCRPC.