(UroToday.com) As prostate cancers harbor relatively low numbers of somatic mutations relative to other solid tumors, much research has been focused on identifying other molecular characteristics that explain disease phenotype. DNA methylation is an epigenetic mark, which means that it changes the effect of a DNA sequence without changing the sequence itself. This process is dictated in part by a balance of two classes of enzymes: (1) DNA methyltransferases, which place methyl groups on cytosine bases located next to guanine bases – also called CpG dinucleotides, and (2) demethylases such as TET enzymes – which hydroxylate methylcytosines – or cytidine deaminases such as APOBEC1 – which deaminate the methylcytosine and ultimately cause the replacement of the modified nucleotide with unmethylated cytosine. 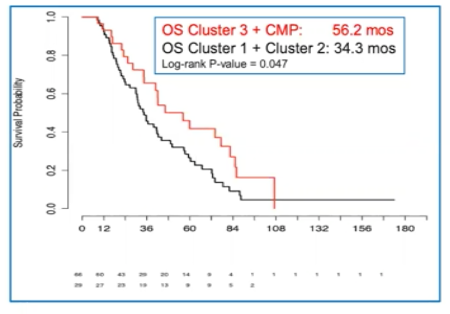 In summary, this analysis identified two clusters of relatively hypermethylated patient samples (29% in total, CMP + Cluster 3) that were associated with improved overall survival relative to other samples. Therefore, Dr. Small proposed that mCRPC can be stratified by methylation pattern into 3 mutually exclusive prognostic groups: (1) Hypermethylated adenocarcinoma – best prognosis, (2) Non-hypermethylated adenocarcinoma, and (3) t-SCNC – worst prognosis. These findings are to be published in the near future.