(UroToday.com) In the session of the 2022 Advanced Prostate Cancer Consensus Conference focusing on the treatment of patients with metastatic castration-resistant prostate cancer (mCRPC), Dr. Shore discussed the role of radium-223 in the modern treatment armamentarium. Setting the stage for this, he first discussed the evolving landscape of treatment options in mCRPC. Certainly, these treatment options are highly influence but agents that are used earlier in a patient disease trajectory including for metastatic castration-sensitive disease or non-metastatic castration-resistant prostate cancer. However, he noted that real world data have consistently shown that most patients with mCRPC receive fewer than two lines of life-prolonging therapy. Thus, based on both clinical rationale and trial data, we ought to be seeking to administer as many lines of treatment with different mechanisms as possible. In doing so, we can benefit patients by prolonging survival, preserving quality of life, preventing complications, all in the context of their preferences. Further, this approach will reduce emergency department visits, inpatient admissions, and health system costs.

In terms of radium-223 specifically, Dr. Shore described the results of ERA-223 as “setting it back” based on evidence that the combination with abiraterone had an increase risk of fractures. This led to a label restriction by the EMA, and decreased clinical utilization in other jurisdictions. However, there is evidence that chemotherapy may safely be given following radium-223. Thus, it may be rationale to use radium-223 earlier in the process before the development of visceral metastasis, in part given based on evidence that sequencing of novel hormonal agents appears to be generally ineffective. The ongoing PEACE-III trial, using a combination of radium-223 with enzalutamide, will better assess the role of combination therapy.

Dr. Shore emphasized that there are many clinical factors that support treatment decision making. First among these is to consider prior treatments, with the goal of maximizing the number of novel mechanisms of action. Other patient and disease factors also are highly influential, including whether patients are symptomatic, whether they are fit for chemotherapy, the volume and sites of metastatic disease, and if there is evidence of small cell or neuroendocrine differentiation. Further, genomic and genetic characteristics including whether there is targetable DNA repair mutations and microsatellite instability may help guide treatment choice. Finally, these considerations need to be taken in the context of patient’s comorbidity, quality of life, and patient preference. He further emphasized whether clinical trials are available.

Citing data from the ALSYMPCA trial, Dr. Shore emphasized that there is evidence of benefit both among patients who were chemotherapy-naïve and those following chemotherapy.

Beyond the efficacy, he noted that radium-223 is a well tolerated treatment. In particularly, there are very low rates of grade 3-4 adverse events. He suggested that, compared to beta-emitters, radium-223 “changed everything” with the alpha particle being very well tolerated. Further, in both the ALSYMPCA trial and real world data from the REASSURE registry, the tolerability of radium-223 was not affected by receipt of prior chemotherapy.

Considering the alternative of docetaxel, Dr. Shore highlighted considerations that may guide treatment choices including the distribution of disease, comorbidities, and other features. 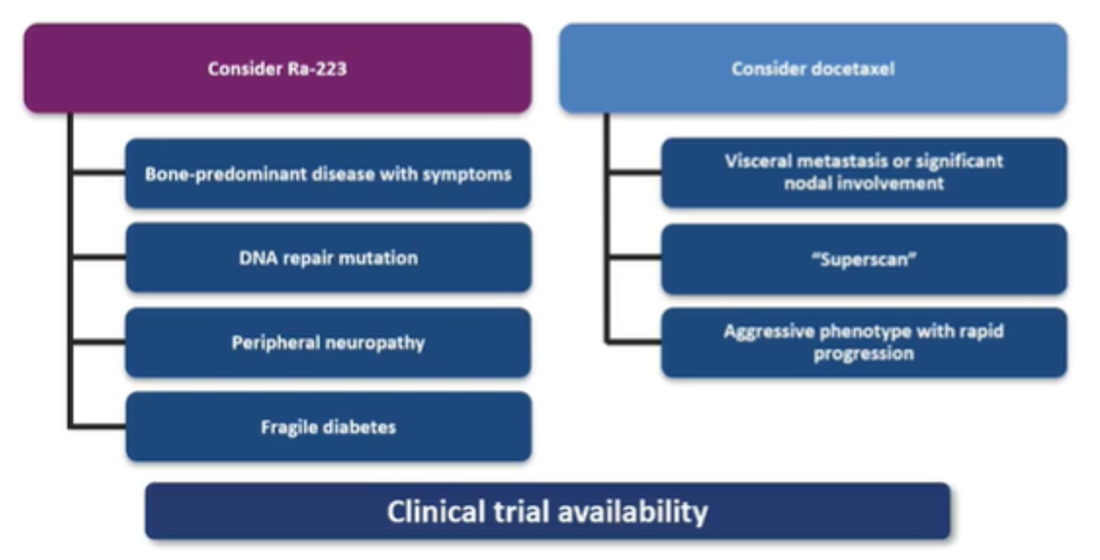 While radium-223 has an accepted history, VISION recently demonstrated the value of the PSMA-targeted radioligand therapy. He noted that use of radium was excluded from the comparator standard of care within the prior. This was in part due to unknowns regarding safety and efficacy, particularly with concerns regarding additive myelosuppression. However, the safety of lutetium-PSMA was comparable for patients who received therapy within 8 weeks of receiving radium-223 to that seen in the context of the VISION trial. Here, 24% of patients had grade 3 or 4 hematotoxicity.

In terms of toxicity, he noted that 177-Lu-PSMA-617 radionuclide therapy is associated with notable adverse events including fatigue, off-target toxicity, and nausea/vomiting. Dr. Shore noted that one of the “key biomarkers” for the use of lutetium-PSMA radioligand therapy will be PSMA-PET access. There is less complexity for imaging approaches when considering the use of radium-223.

Interestingly, considering outcomes of Lu-PSMA radioligand therapy, a small study has shown that patients who had previous treatment with radium-223 experienced better outcomes than those who did not have prior radium-223 treatment, though this was attenuated in patients with a larger number of metastatic sites. He further cited data from the REASSURE registry emphasizing the feasibility of lutetium-PSMA-617 following radium-223.

Dr. Shore emphasized that there are many considerations, including imaging, premedication, administration precautions, infusion time, and warnings and precautions following therapy that may be influential in treatment choice.

Dr. Shore emphasized that there is a complex process involved in building a radioligand program, including planning, implementation, and operationalization. In the meantime, radium-223 has level 1 evidence and is a category 1 recommendation of the NCCN prostate cancer guideline panel. Moving forward, he provided a proposed sequencing for radium-223, including upfront utilization in mCRPC, either with or without the use of PSMA-PET/CT. 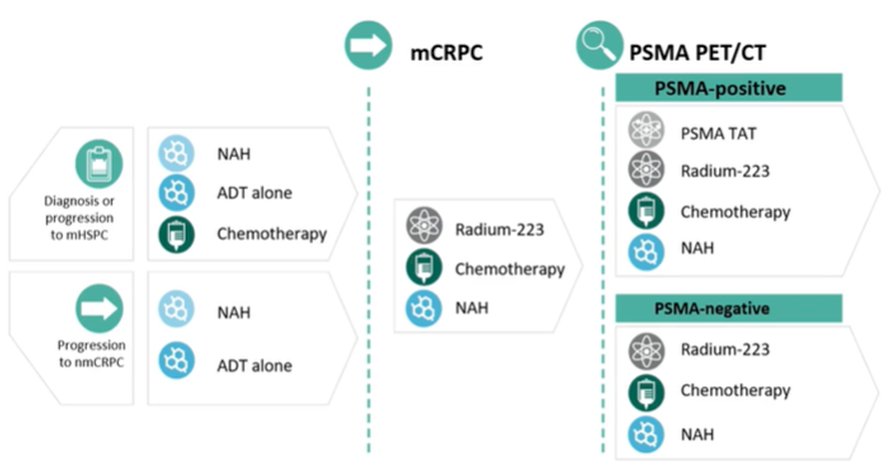 Thus, moving forward, he emphasized that mCRPC treatment decisions depend on prior treatments received. Radium-223 is a novel mechanism of action for treatment, which will not have previously been exhausted. There are many ongoing trials in both the mCRPC and metastatic castration sensitive space that will help better define the role of radium-223.