(UroToday.com) The first session of the Advanced Prostate Cancer Consensus Conference 2021 which was hosted in the context of the COVID-19 pandemic focused on the management of patients with newly diagnosed metastatic hormone-sensitive prostate cancer. While a number of presenters discussed the evidence for treatment intensification (including up to “triplet therapy”), Dr. Robert Jones discussed whether androgen deprivation therapy (ADT) monotherapy remains an appropriate treatment choice for some patients.

In this context, Dr. Jones began by highlighting that we may consider reasons based on both biology and on humanity that we may want to use ADT monotherapy alone. Addressing the biological considerations, the relevant question is whether we can predict the futility of additional therapies, or where additional therapies would be more harmful than helpful. From the humanity perspective, we should consider if we can predict those patients who would die of other causes without intervening prostate cancer-related morbidity without additional therapy.

Dr. Jones highlighted that available data to date demonstrate that uptake of advanced treatment options including docetaxel and androgen receptor targeting agents has been relatively poor in metastatic castration sensitive prostate cancer (mCSPC). Thus, the majority of patients are receiving ADT monotherapy currently. Further, he highlighted that in their approval of enzalutamide in this disease space, NICE estimates that no more than 30% of potentially eligible patients will receive therapy. However, we know that treatment intensification has important survival benefits moving even into the non-metastatic space (based on data from STAMPEDE that was recently presented at ESMO 2021), thus, it’s unlikely that a lower disease volume subset of patients with mCSPC would be expected not to benefit from treatment intensification.

However, he highlighted early exploratory translational data which, based on mRNA profiling, has demonstrated that patients with basal PAM50 subtypes likely do no benefit from additional novel androgen axis inhibitors or docetaxel.

He further considered whether we can predict patients in whom additional therapy may do more harm than good. In the case of urothelial carcinoma, there are relatively well-accepted criteria for cisplatin eligibility. However, there is no consensus definition of docetaxel suitability though many patients are “rightfully” excluded from chemotherapy. However, very few patients should be totally excluded from androgen receptor targeting agents.

Moving to consideration of the role of humanity in treatment selection, Dr. Jones emphasized the importance of identifying patients where the prognosis is so good that additional therapy is unnecessary. While there has been lots of work on prognostication in mCRPC, there is relatively little comparable work in mCSPC. One such example, however, is the Glass categorization based on patients accrued in the early 1990s, defined on the basis of appendicular disease, performance status, and Gleason score. The original derivation of this classification showed an ability to prognosticate 5-year survival. Further, using GETUG-15 data, the Glass categories were validated. However, those same investigators demonstrated that alkaline phosphate levels at baseline may have higher prognostic value. 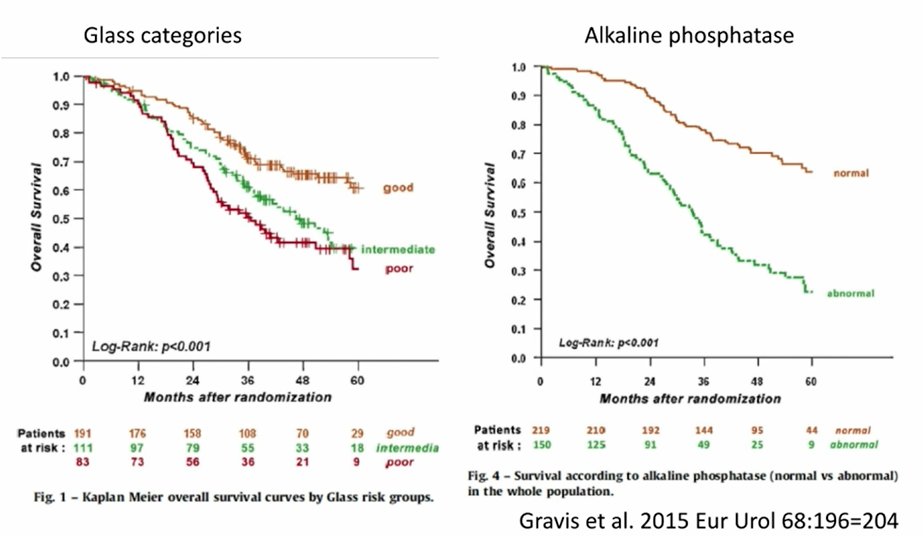 However, we may move beyond standard clinical variables and laboratory investigations to incorporate new markers. He cited data from the STAMPEDE trial which assessed DNA copy number changes. Those authors found that lower levels of genomic instability were associated with improved overall survival. Further, modern imaging may be able to further help define these groups.

Beyond prostate cancer-related considerations, the use of life tables may allow us to better understand our patients’ life expectancy “but for prostate cancer” to understand non-cancer mortality. Further, there are many tools outside of oncology which provides a comprehensive assessment of comorbidity that may allow us to better assess competing risks.

In conclusion, Dr. Jones highlighted that additional therapy should be potentially applicable to most men with mCSPC. However, there are likely a subgroup of patients who will not benefit from current therapies though we may lack the tools to identify who they are. Further, most patients with mCSPC may suffer morbidity and mortality from their disease and better prognostication allow use to intelligently select those who are unlikely to benefit from additional therapy.