(UroToday.com) In this session, Dr. Karim Fizazi reviewed evidence for “triplet therapy” comprising ADT plus radiation (RT) to the primary plus additional systemic therapy in metastatic hormone sensitive prostate cancer (mHSPC). He began by reviewing the evidence for each of these therapies individually in mHSPC, noting that systemic therapy should be intensified for most men with mHSPC. Meta-analysis of four trials demonstrated a 23% reduction in mortality for men with mHSPC with the addition of docetaxel to ADT. Likewise, the LATITUDE and STAMPEDE trials demonstrated significant improvement in overall survival (OS) in this setting. 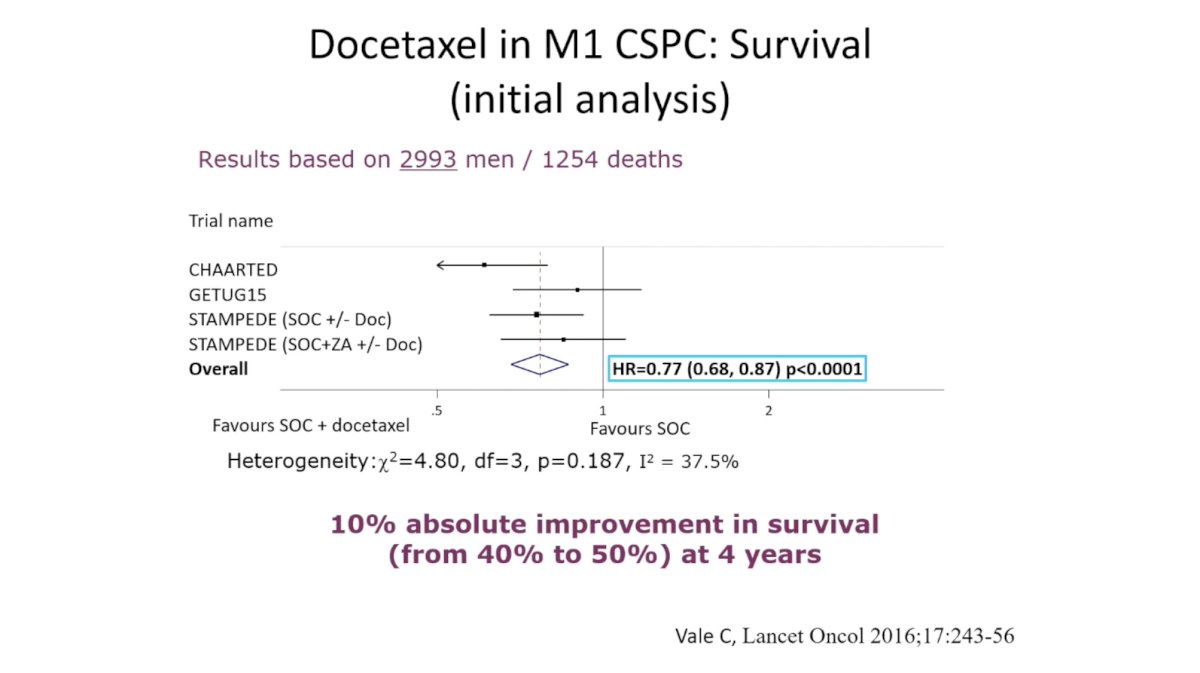 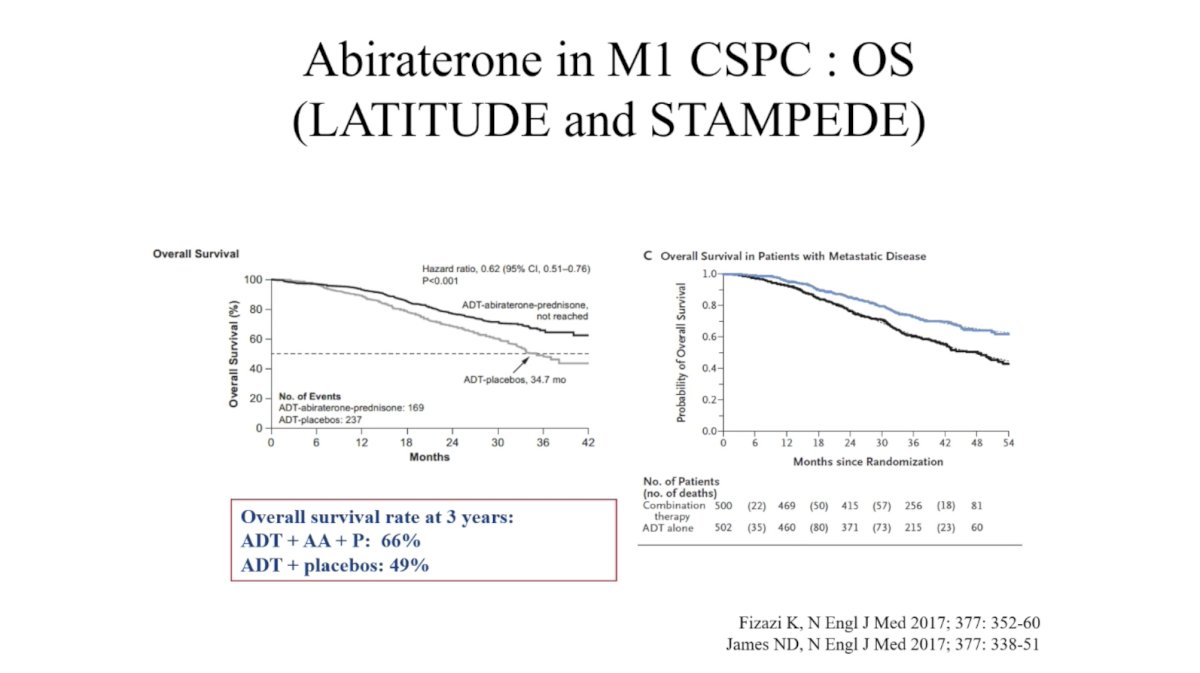 The addition of RT ADT in the STAMPEDE study demonstrated an improvement in OS for men with low burden disease, but not those with high burden disease. As these studies each tested only one hypothesis – the intensification of systemic therapy or the addition of RT – we do not know if we should combine these interventions in men with mHSPC. 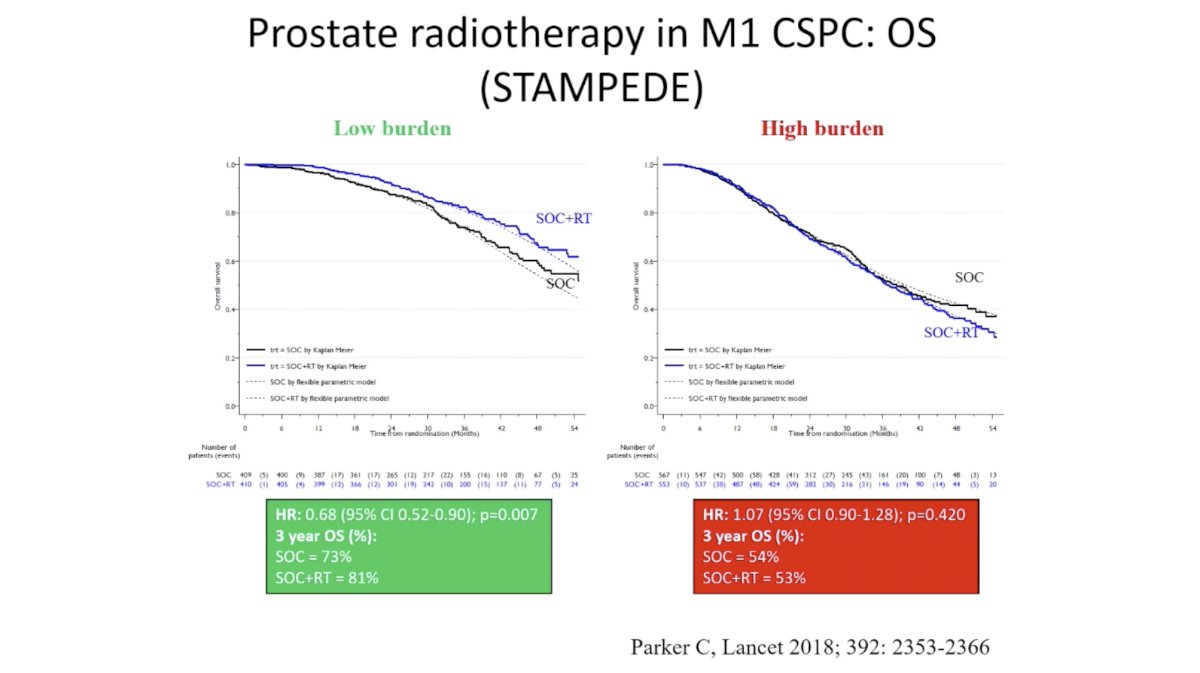 Recent data from the PEACE-1 study begin to provide an answer on the efficacy of “triplet therapy” – ADT plus RT to the primary plus additional systemic therapy – in men with mHSPC. The PEACE-1 trial employed a 2x2 factorial design to assess (separately and combined) the impact of the addition of RT and abiraterone to SOC therapy in men with mHSPC. The recent presentation at ESMO 2021 demonstrates an improvement in OS for the addition of abiraterone to ADT plus docetaxel, particularly for men with high volume disease.= 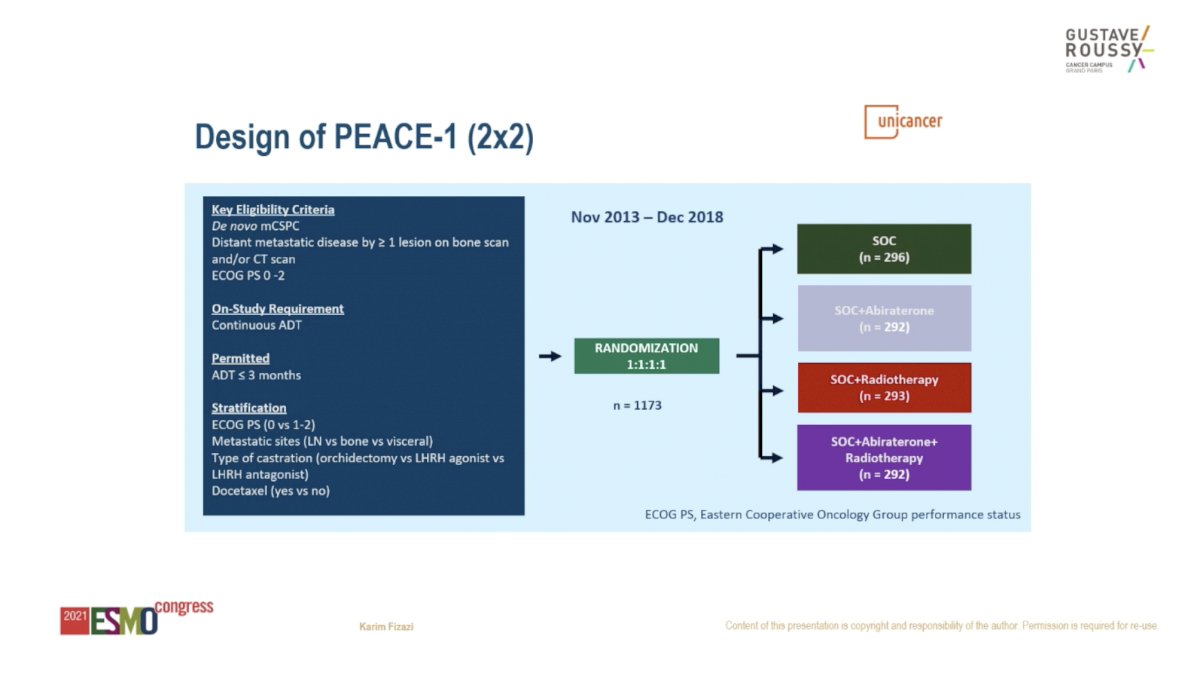 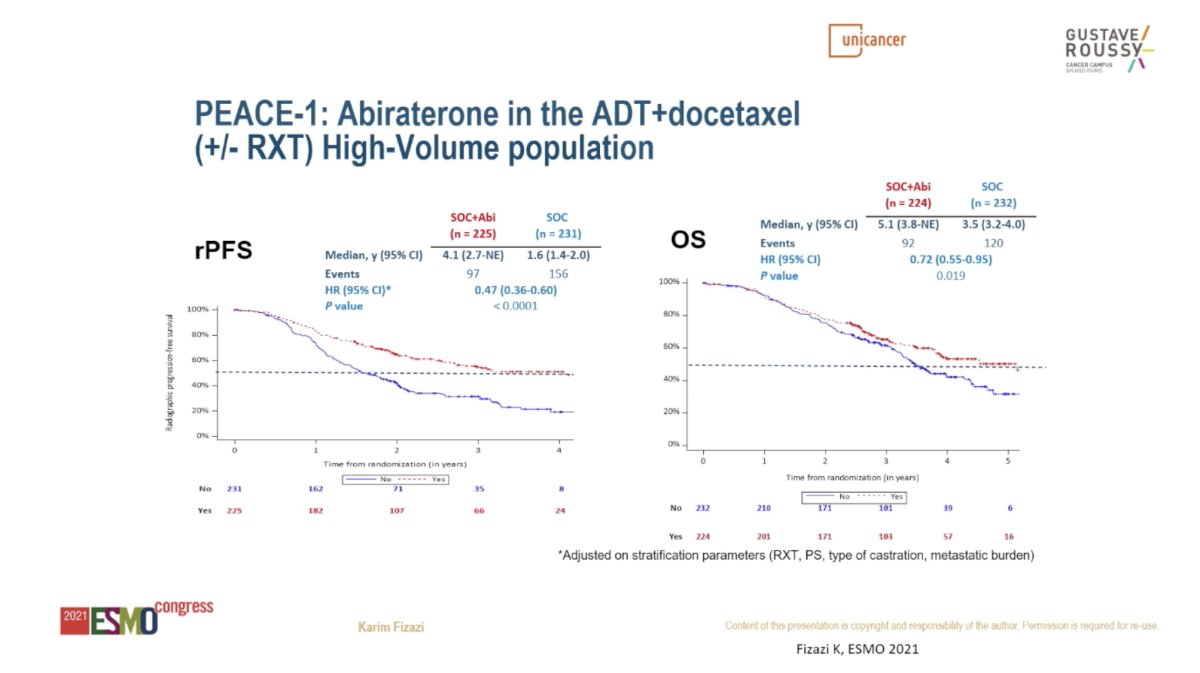 We do not yet have data on the impact of adding RT to ADT plus docetaxel, however, PEACE-1 should provide an answer to this question. Men with mHSPC will receive standard of care systemic therapy (ADT with or without docetaxel) and be randomized to treatment with or without RT (74 Gy in 37 fractions) to the prostate after docetaxel is completed. The pre-specified statistical analysis plan for the RT arm focuses on men with oligometastatic (or low volume) mHSPC. For the co-primary endpoint of radiographic PFS, 299 events are needed, which is anticipated to occur by 2023. 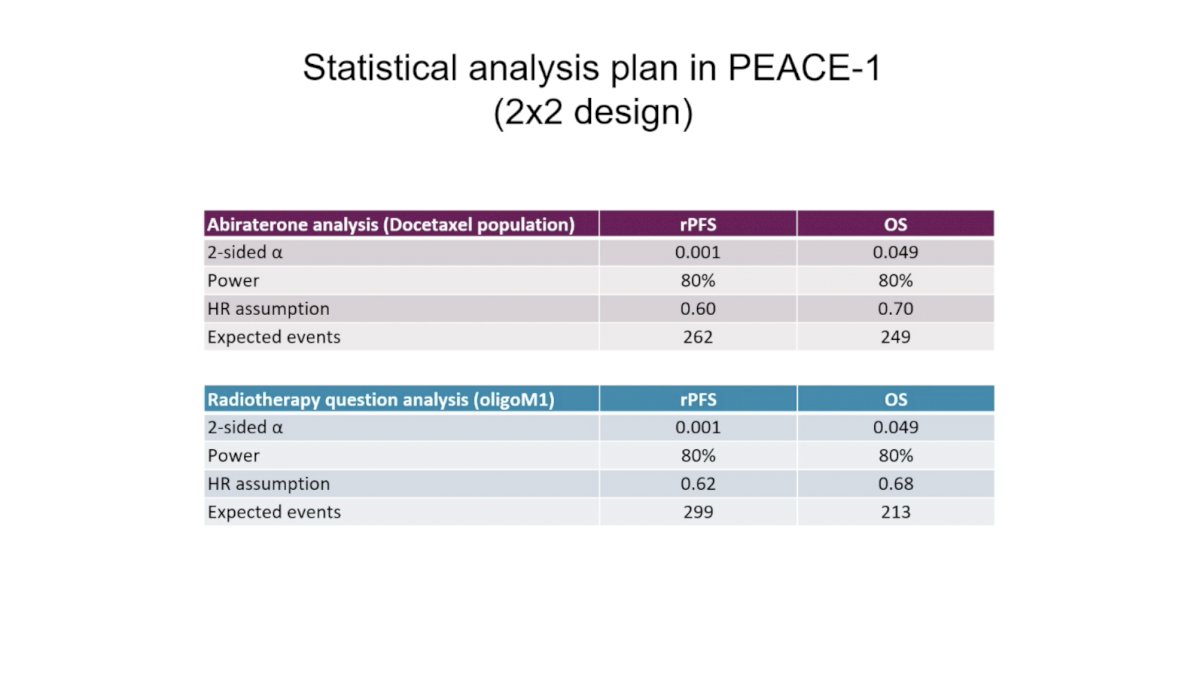 The limited available data that exist suggests that this triplet therapy is safe. The reported safety results from PEACE-1, do not indicate high rates of pelvic toxicity. A Phase 1 study of ADT plus abiraterone plus RT demonstrated no increase in pelvic toxicity with the combination.[1] The majority of studies (PEACE-1, STAMPEDE, and several studies of neoadjuvant therapy in men with high-risk localized disease) evaluated ADT plus docetaxel plus RT administered sequentially with RT commencing after completion of docetaxel. One Phase 2 study demonstrated the safety of concurrent ADT plus docetaxel plus RT in the adjuvant setting.[2]

Dr. Fizazi concluded that data supports the safety and efficacy of combining ADT plus RT plus intensified systemic therapy in men with low volume mHSPC, while acknowledging that there is no direct evidence from randomized controlled trials. The field eagerly awaits the results of PEACE-1, which should clarify this question. Results are expected as early as 2023. Open questions that will need to be addressed are how metastasis-directed therapy and new active agents (eg PARP inhibitors and Lutetium PSMA) will be incorporated into these treatment paradigms.