(UroToday.com) In this session, Dr. Ian Davis reviewed the evidence for “triplet therapy” comprising ADT plus docetaxel plus additional systemic therapy in metastatic hormone sensitive prostate cancer (mHSPC). He began with a high-level summary of five clinical trials that included patients treated with triplet therapy: TITAN, ARCHES, ENZAMET, PEACE-1, AND STAMPEDE M0. He noted key factors that are important to consider when comparing results across these trials, including different patient populations, endpoints, duration of follow-up, and whether docetaxel was given sequentially or concurrently. He then reviewed each trial individually. 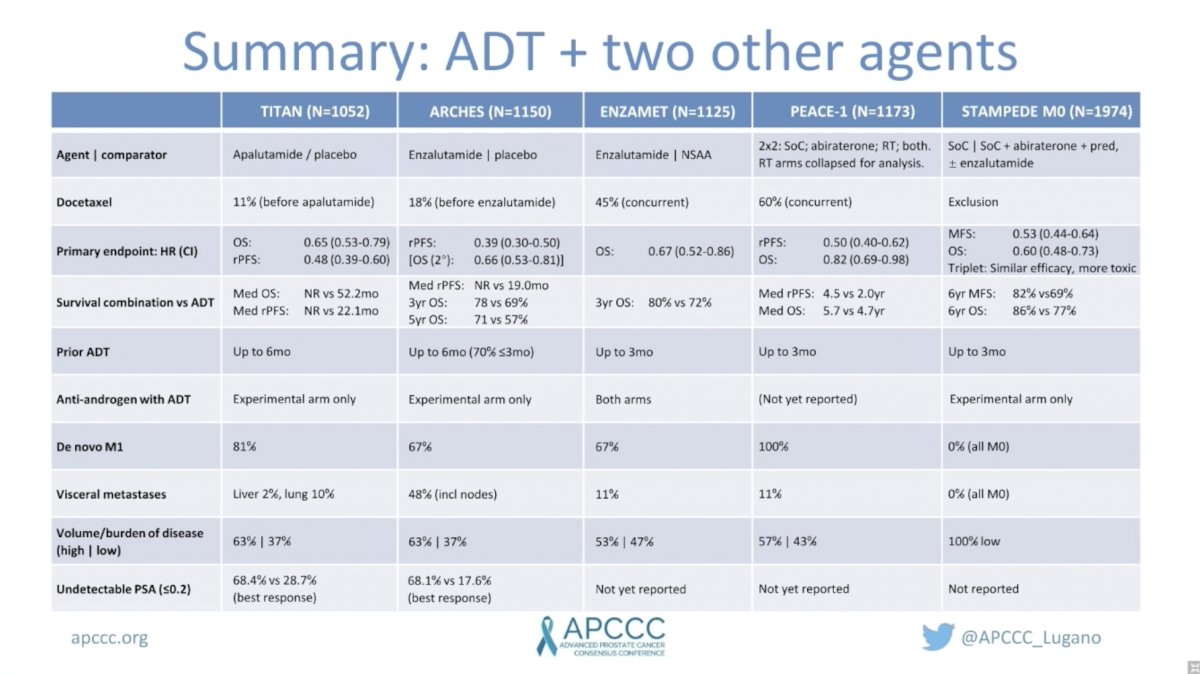 TITAN randomized 1,052 men with mHSPC to ADT plus apalutamide versus placebo. Notable characteristics included 63% of men with high-risk disease and 81% with synchronous mHSPC. Only 11% of men also received docetaxel. This was included as a stratification factor and docetaxel was administered before apalutamide commenced. Notably, there was no evidence of subgroup differences for benefit of apalutamide among patients who did versus did not receive prior docetaxel. 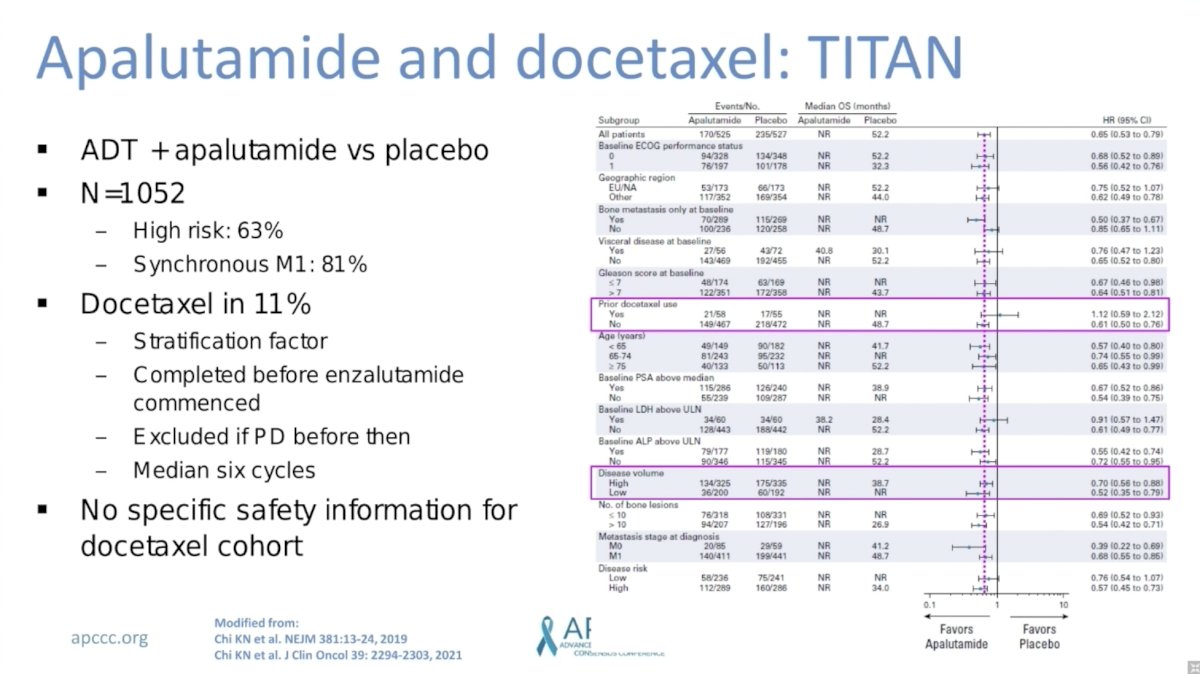 ARCHES randomized 1,150 men with mHSPC to ADT plus enzalutamide versus placebo. Notable characteristics included 63% of men with high-risk disease and 67% with synchronous mHSPC. Only 18% of men also received docetaxel. This was included as a stratification factor and docetaxel was administered before apalutamide commenced. Again, there was no evidence of subgroup differences for benefit of enzalutamide among patients who did versus did not receive prior docetaxel. 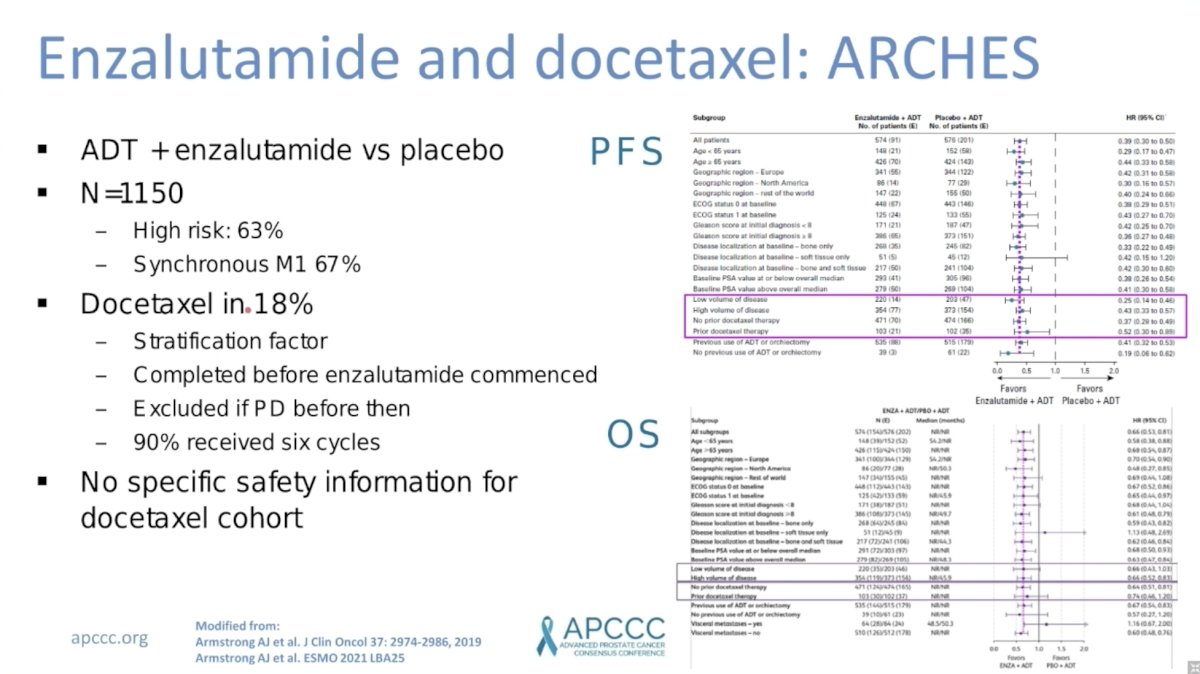 ENZAMET randomized 1,125 men with mHSPC to ADT plus enzalutamide versus active control (NSAA). 53% of men had high-volume disease. Notably, 45% of men received concurrent docetaxel with enzalutamide. This was included as a stratification factor and was not randomized. A higher proportion of men with high-volume (61%) than low-volume (27%) disease were treated with docetaxel. There was a reported increase in some toxicities with the addition of docetaxel to enzalutamide. However, health-related quality of life was maintained in the long-term. From an efficacy standpoint, interim analysis demonstrated a strong improvement in PFS with the addition of docetaxel, but not OS. 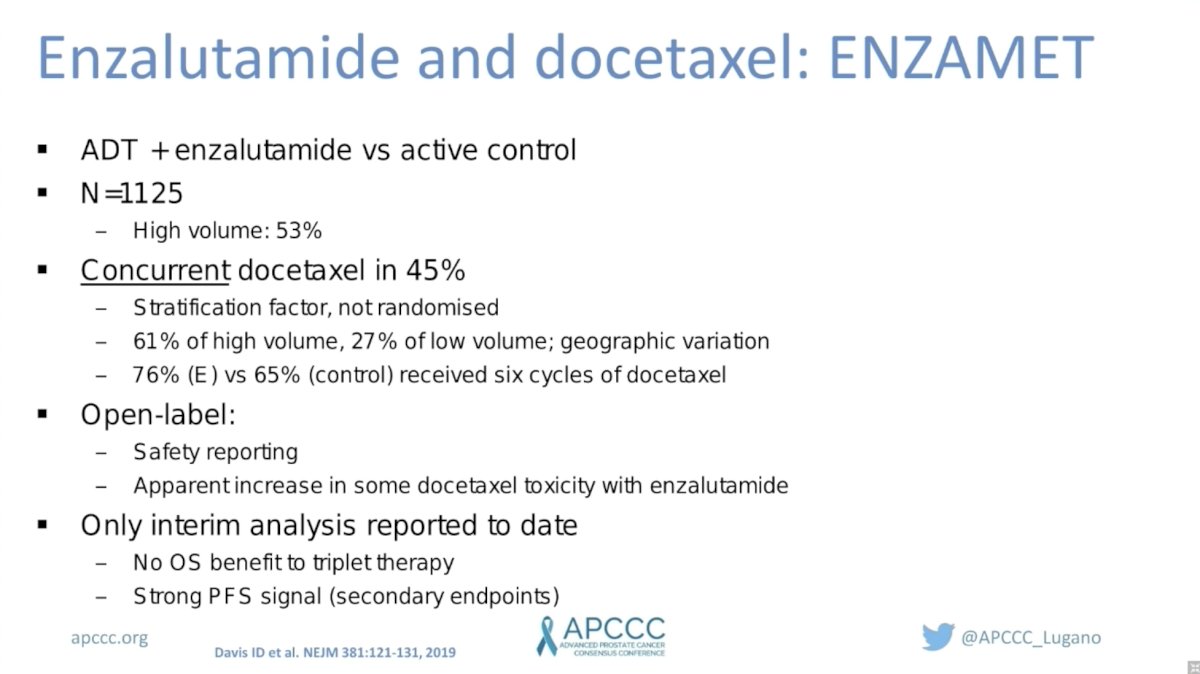 PEACE-1 randomized 1,052 men with mHSPC to ADT (with or without docetaxel) to receive abiraterone or placebo. Notably, all men had synchronous metastatic disease and 57% had high-burden disease. Given the evolving control arm on this study, 60% of men received concurrent docetaxel, which was included as a stratification factor. PEACE-1 demonstrated a significant improvement in rPFS in men with high-volume and low-volume disease while the OS benefit was only evident in the high-volume group. Notably, the OS data in the low-volume group was immature. There were no major safety signals with the addition of abiraterone to ADT plus docetaxel. 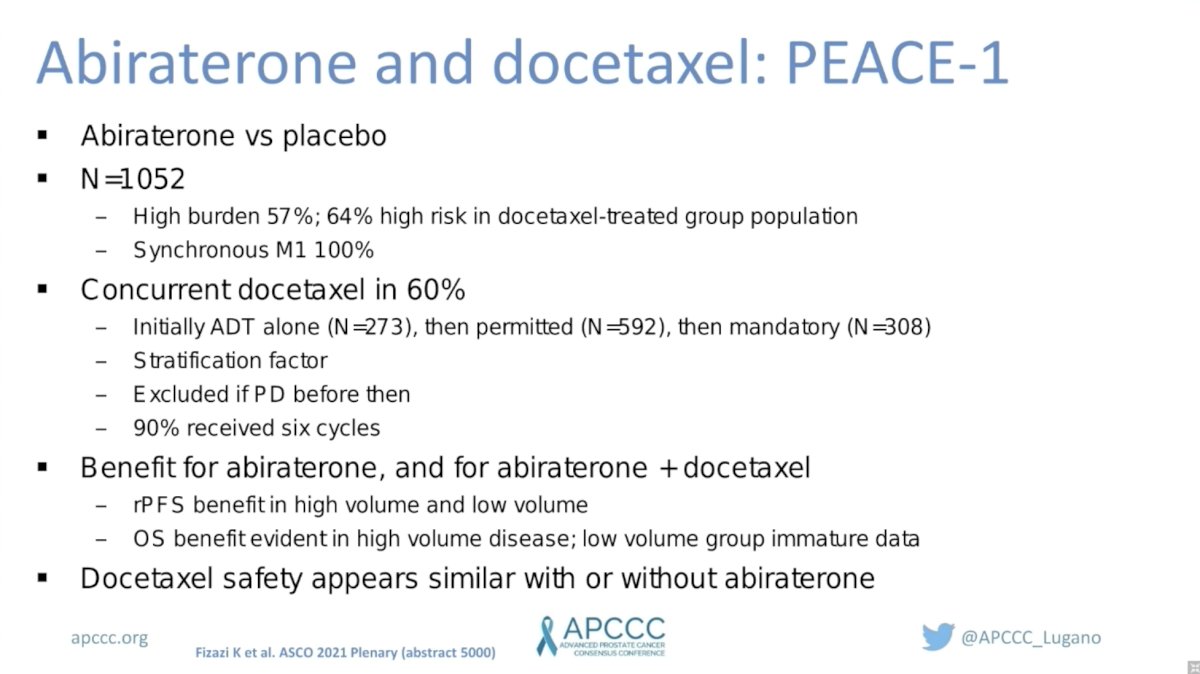 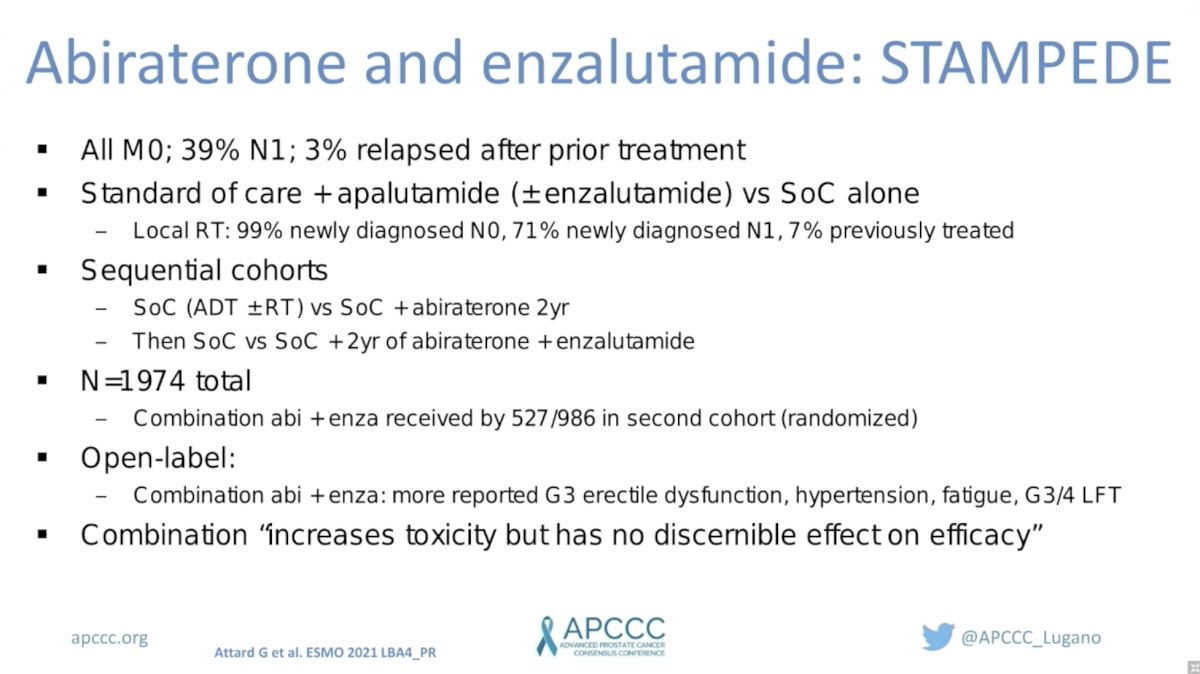 Dr. Davis concluded by summarizing the results of these five studies. Patients receiving triplet therapy on TITAN and ARCHES comprised a minority of the study population and were treated in rapid sequence, demonstrating no benefit for the addition of docetaxel to ADT plus apalutamide or enzalutamide, respectively. ENZAMET showed a strong radiographic PFS benefit for the addition of concurrent docetaxel to ADT plus enzalutamide, but no OS benefit – although only 50% of the planned events occurred at the time of this analysis, so the data is immature. The most recent data from PEACE-1 demonstrated a significant improvement in radiographic PFS in all men with mHSPC, but the OS benefit was evident only in the high-volume group. Again, OS data in the low-volume group was immature. Future data updates from ENZAMET and PEACE-1 will help to define the role of triplet systemic therapy in men with mHSPC. Finally, STAMPEDE demonstrates no benefit, but added toxicity with the addition of enzalutamide to ADT plus abiraterone in men with high-risk non-metastatic HSPC. Not discussed herein were detailed safety or cost analyses, which will be important to consider as we move towards triplet therapy for men with mHSPC.